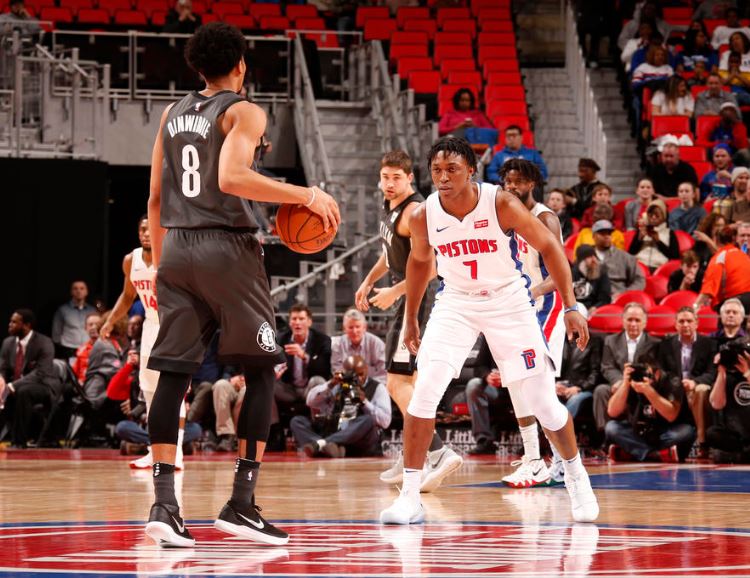 This is the second game of a back-to-back for both the Brooklyn Nets and Detroit Pistons.

The Detroit Pistons aren’t a contender, but at the same time, they haven’t officially been eliminated from the playoffs. They were so desperate to make the playoffs this year that they traded for Blake Griffin.

The Mythological Creature Known As The Griffin

The Brooklyn Nets have notoriously been bad guarding centers and point guards this season. Rookies typically struggle defensively so that shouldn’t be a knock against Jarrett Allen who has looked like one of the better players in his draft class and continues to get better game by game. As for D’Angelo Russell, he’s got a lot of work to do on the defensive end as well. However, offensively post all-star break he’s been brilliant. D’Angelo has somehow cranked up his assists while decreasing his turnovers. Plus, we cannot forget in that time how scorching he’s been from three (38%).

Reggie Jackson is back and no matter what you think of him the Pistons benefit by him being healthy and on the floor. Ish Smith is a solid player, but consistency has always been an issue for him. If you are looking for punch off the bench Ish fits that bill, but with the plethora of point guard talent around the NBA, it’s hard to expect him to produce at the level of a starter. When both these guys are healthy the Pistons can legitimately fill their point guard slot for the full 48 minutes. On the flip side, besides D’Angelo, the Nets have Spencer Dinwiddie.

Dinwiddie was electric to start the season and quickly became a social media sensation. Since then his shot has been up and down, but unlike D’Angelo, Dinwiddie is a competent defender. This gives the Nets the luxury of mixing and matching for offense and defense.

Andre Drummond has been much improved this season. Drummond has greatly improved his playmaking abilities and free throw percentage. With Blake Griffin, much offense ran through him, so Drummond was passing less, but now with Griffin out we are likely to see Drummond’s passing prowess return to form. Drummond has done a better job blocking shots this season. As good as Drummond has been defensively this season he has still been susceptible from time to time to give up a lot of points to the opposing center. Additionally, it’s important to note that Drummond still has a limited shooting range. So the goal should be to try to keep him a far away from the basket as possible.

The Pistons forwards are liabilities. Reggie Bullock cannot do anything outside of shooting. Stanley Johnson cannot do anything besides play defense. And Anthony Tolliver’s greatest skill is being invisible because he doesn’t help or hurt a team. If you haven’t guessed this is where the Nets have a major advantage. DeMarre Carroll has been shooting over 41% from three since the all-star break and he’s also a decent rebounder and defender. Much like Carroll, Caris LeVert is shooting a similar percentage from three since the all-star break. Furthermore, LeVert has good playmaking skills for someone of his size. Finally, Rondae Hollis-Jefferson is a good defender that can also attack the basket on the offensive side of the ball.

Too Little, Too Late

The Pistons have won four games in a row, but it doesn’t look like it will be enough to nab them a playoff spot. For the Nets to win this game they will likely have to match the Pistons production from the point guard and center positions considering the Nets have a major advantage with their forwards. The spread in this game varies from +/- 1 depends on the sports book. Since the Nets are at home I’d be inclined to give them the slight edge.