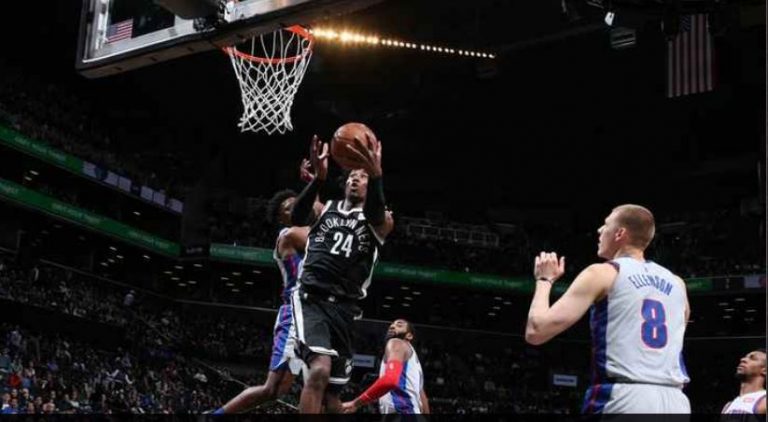 After two straight wins, including a nailbiter in overtime against the Miami Heat, the Brooklyn Nets had plenty of reasons to be confident heading into their Sunday game against the Detroit Pistons. Detroit entered the game in the midst of a bit of a hot streak as well, but their team had different concerns from the Nets’ issues. The Pistons are desperately clinging to the remnants of their playoff chances.

While the Pistons are virtually guaranteed to be eliminated from the playoffs sooner or later, they managed to keep their postseason hopes alive for at least one more game. They took a double-digit lead into the locker room at halftime en route to a 108-96 victory. The Nets have only five games left in this season and could have started the month of April on a better note. Nonetheless, this loss was at least an understandable one in a season full of difficult defeats.

The Detroit Pistons have looked like a completely different team since Reggie Jackson‘s return from injury. While Ish Smith is a more-than-capable backup floor general, he is nowhere near enough of a scoring threat to be a full-time starter. The Pistons picked up Jameer Nelson and Dwight Buycks in the middle of the season to fill in for the absence of Jackson. The team was 5-1 since Reggie’s return prior to this game, and Jackson was the main reason why that became 6-1 after this Pistons win.

Jackson scored 29 points on 22 shots in this game, leading the game in scoring and nearly doubling the production of the next-closest players (Stanley Johnson and Ish Smith each had 17 points). He consistently attacked Brooklyn’s defense all night long, as he found his way to the line for 13 free throw attempts. There is a rational reason why the Pistons look like a different team then earlier in the season. Specifically, with a potent off-the-dribble threat in Jackson running the attack, it will be interesting to see how the fit between Jackson, Griffin, and Drummond works out next season.

Jarrett Allen Holds His Own

With the season winding down, the Brooklyn Nets should look to strong performances from their young players as positive signs heading into the offseason. The best surprise among Brooklyn’s young players has been Jarrett Allen, a presumed project big man who has instead worked his way into the starting lineup as a teenager. While Allen still has room to grow, this game against an All-Star center was an opportunity to showcase his growth.

While Allen was not perfect, he was certainly not intimidated by Drummond. Allen finished with a team-high 15 points on just nine shots and chipped in with six rebounds and three blocks. Allen also committed five fouls and allowed Drummond to take control on the glass. However, centers with far more experience than Allen have tried (and failed) to keep Drummond in check on the glass. This was a solid showing for the young rookie, and a great sign of things to come.

As the third quarter came to a close, Quincy Acy and Andre Drummond managed to get tangled up as they tried to chase down a rebound. After a brief tussle, the two were separated by a referee, before Drummond reached out and shoved Acy. Acy then chased after Drummond as their two teammates tried to keep them apart. Both Acy and Drummond were immediately ejected from the game.

The Nets did not manage to make a comeback with Drummond out of the contest. It will be interesting to see what the repercussions might be from this fight. Either Drummond or Acy could be suspended for a game (or fined) after the league  reviews this spat. While this fight could have ended up significantly worse for all of those involved, the fight certainly stood out in a game that was seemingly in Detroit’s control beforehand.