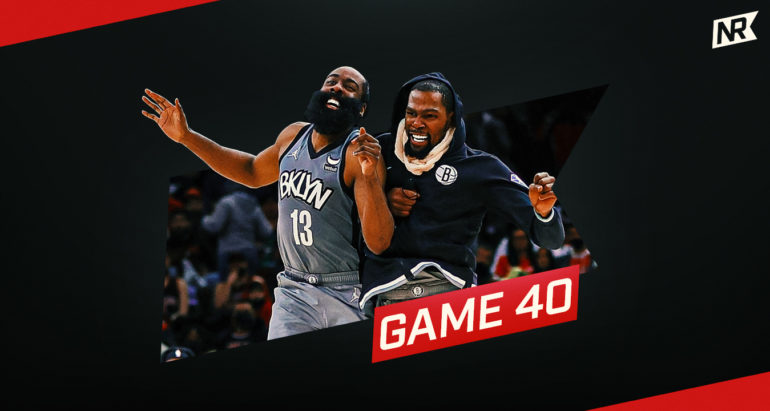 The Brooklyn Nets needed a huge win, especially after their blunder against the Portland Trail Blazers on Monday. Importantly, the narrative that the Nets can’t beat good teams had to end. Heading into a matchup against the Chicago Bulls—a team that has beat them twice this season—Brooklyn got exactly what they needed. In what has to be the most complete, fun game they played this season, the Nets showed how elite they are and can be. They started quick from tip-off and never looked back. With a strong team effort that led to efficient offense and hard-nosed defense, the Nets sent a message to the first-place Bulls and to the entire league, annihilating Chicago 138—112. The team, when clicking, is scary good.

Brooklyn raced out to a fast start in the first quarter, something we have not seen often this season. The Nets shot 57 percent from the field to a quick 38 points. After recent struggles, they were able to find their three point shot and managed to make five out of seven attempts. They were also able to aggressively get to the basket and the free throw line. Chicago started off hot as well, shooting 50 percent from the field. This game had the makings for a shootout.

The second quarter saw the Nets cool off just a tad. They spent a good amount of the quarter scoring through Kyrie Irving who had seven. There was also some “point Durant” as Kevin Durant facilitated three assists as well. Chicago was able to close the lead thanks to four Nets turnovers and successfully getting to the free throw line. At halftime the score was 62–60.

The third quarter is where Brooklyn went to overdrive and effectively put this game away. Brooklyn and Chicago traded baskets and at the 8:44 mark, the score was tied 71–71. From this point on, Brooklyn took over the game, as they went on a 30–8 run to end the quarter. Durant, on his usual efficient scoring night, led the way as he scored 17 of Brooklyn’s 39 points. The Nets offense was on absolute fire as they shot 12/18 overall, with 5/9 from three point territory. The defense was the big story in the quarter. The Nets defense forced six turnovers that lead to quick, easy points. The defense also put Chicago in clamps, and forcing tough shots, causing the Bulls to brick their way to a 30 percent shooting quarter.

Brooklyn made sure the the game was thoroughly out of hand and didn’t let the foot off the breaks. The scoring run continued as the Nets poured in 13 more points before Chicago could get on the board. By this point, the 30–8 run became a 47–10 extended scoring run. At one point the Nets built their largest lead of 38. With the win secured, the Nets put in the “stay ready group” for the garbage time minutes.

With the 138–112 victory, the Nets also broke their record for most points against the Bulls.

Great things happens when Kevin Durant, Kyrie Irving, and James Harden are on the court together. With Wednesday night’s win, the Nets are 133 overall, 2–0 this season, when all three are playing. Kevin Durant continued his MVP campaign by putting up 27 points with 9 assists. KD did this in his usual efficiency, shooting 70 percent from the field. With the 27 points, this is the 12th straight game he has scored 25 or more points in. Harden played aggressive tonight in his return after missing the Portland game with a left knee hyperextension. The Beard dropped 25 points to accompany Durant. However, with Harden as the primary facilitator for Brooklyn, dishing a whopping 16 assists. Irving may not have had the hottest night, only putting up nine points, four rebounds, and three assists, but was still vital to the Nets offense.

Having all three superstars out on the court together turns the game into a shootout. Everyone in the NBA knows how elite Durant, Irving, and Harden are at scoring and generating offense. In order to try to beat them, opponents have to hope that they can match the Big Three’s output, and most of the time, that does not happen. Also, having the Big Three creates more opportunities for the Nets on offense. The Nets are allowed to employ a four-out offense with a shooter and big to accompany them. The Big Three allows for better spacing to allow shooters to be wide open for easy threes since Durant, Irving, and Harden attract so much attention.

The Big Three weren’t the only ones who had a night in Chicago. The Nets role players were key contributors in the win. Patty Mills seems to have broken the slump as he returned to form coming off the bench. Mills tacked on 21 points in sharpshooting fashion, shooting 7/10 overall, but more importantly, 6/8 from three. DeAndre’ Bembry chipped in with five points and five rebounds. However, Bembry was more noticeable with his defense. Bembry guarded Bulls stars DeMar DeRozan and Zach LaVine and made them work for their baskets. The little used Blake Griffin also was a key contributor. The savvy veteran put up nine points and five rebounds. The Blue Collar Boys president did the usual gritty work that he does, constantly diving for loose balls to give the Nets extra possessions. Overall, Mills, Bembry, and Griffin were a +33, +35, +34 in +/-.

Another huge story for the night would be the Nets defense. The Nets forced 17 Bulls turnovers which lead to many scoring opportunities. Though the Bulls still shot just under 50 percent from the field, their defense made sure the Bulls had tough looks to begin with. After poor recent performances, the Nets showed again why they can be a top-10, even a top-5 defense in this league. The Nets were quick in their switches and rotations, and executed drop coverages on the Bulls bigs well. Hopefully, the Nets can continue this solid defensive play to build momentum as the season continues.

Another game, and another opportunity for the Nets rookies to shine. With centers Nic Claxton and LaMarcus Aldridge declared out for the game, Day’Ron Sharpe got the call to start. Sharpe did not disappoint and showed glimpses of how he can be the Nets big man in the future. Sharpe’s high-energy, aggressive play was shown from the beginning. On offense, Sharpe would roll hard to the rim and, if given the opportunity, slam a ferocious dunk. On defense, he did a solid job at limiting Bulls star center Nikola Vucevic, as well as defending the paint with key blocks. With his astounding play, Sharpe finished with 20 points, on 10/14 shooting, and seven rebounds. Not bad for a first start.

Kessler Edwards also got to start. He opened nicely in the first quarter with a three and dunk. Overall, Edwards finished with nine points on 4/8 shooting. Nets fans know that Edwards can let it rip from three and what he can provide on offense. However, his defense was on showcase. Tasked with helping guard Bulls star wings DeMar DeRozan and Zach LaVine, he put the clamps on them and forced them to put up tough shots. Edwards hustle and energy was very noticeable as he was able to get three steals and a block to lead into transition opportunities. Even if he wasn’t credited with the steal, Edwards’ ability to disrupt the Bulls from running any plays or setting up an offense was a key when it came to Brooklyn starting to pull away in the third and fourth quarters.

The Nets have yet another back-to-back to deal with. The team will fly back to Brooklyn as they hope to build momentum off this win as the tanking Oklahoma City Thunder come into town. Tip-off at Barclay’s Center will be at 8:30 p.m EST.

Currently, the Brooklyn Nets are 26-14 and second in the Eastern Conference. Their victory over the first place Chicago Bulls brings them to 1.5 games behind them.