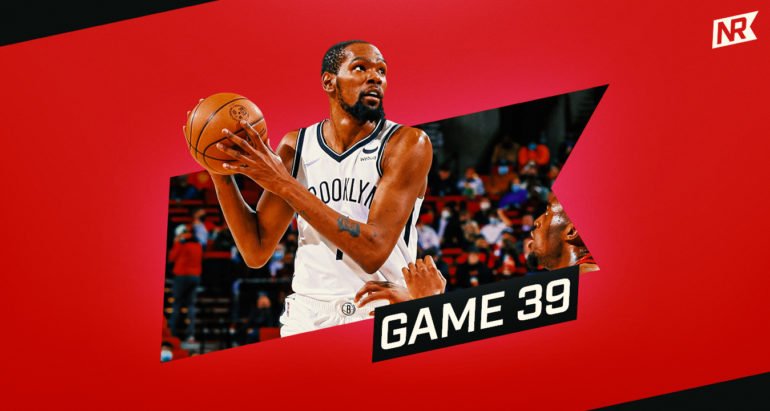 Coming off an overtime victory against the San Antonio Spurs on Sunday afternoon, the Brooklyn Nets quickly flew across the country to play the Portland Trail Blazers on Monday night. During the unexpected back-t0-back, the Nets tried to shrug off their slump by building momentum early and went up to a solid seven point lead at halftime. But the fatigue eventually set in. An absolutely poor third quarter put Brooklyn in a hole they couldn’t recover from. Even with a spirited effort to comeback, the Nets ran out of gas and lost the game against the undermanned Blazers, who were also coming off a back-to-back.

The first quarter was a mixed start for Brooklyn. With superstar James Harden out with left knee hyperextension, it was the Kevin Durant and Kyrie Irving show. Durant and Irving combined for 15 of the Nets’ 26 points. However, the Blazers still went up an early seven points. Portland center Jusuf Nurkić made a living at the free throw line, drawing quick fouls on Nicolas Claxton. The Blazers got to the line 17 times in the first quarter. The Nets faced a 33–26 deficit.

Brooklyn finally woke up in the second quarter and went on a 36 point scoring burst, clamping the Blazers to only 22 points. Durant and Irving continued to lead the way with their scoring. Rookie Day’Ron Sharpe also had himself a quarter, bullying in the paint to a good eight points. Things were looking swell in their 62–55 halftime lead.

The third quarter is where it all started to fall apart. The Nets shot 40 percent overall for the quarter, but worse, only made one three on eight attempts. In comparison, Portland shot 52 percent from the field, and hit eight threes. The Blazers outscored the Nets by 13 points and took a six point lead heading into the fourth quarter.

The fourth quarter saw a spirited comeback effort by the Nets. Rookies Cam Thomas and Day’Ron Sharpe led the team, combining for 14 of the 27 fourth quarter points. But the Nets could never take the lead back. The Nets could not get consistent stops, and Portland would respond to every Nets basket with their own. The Blazers were put away with two dagger three pointers by Ben McLemore. The Nets lost the game to 114–108.

This loss puts Brooklyn at a 2–4 record in the month of January, with the struggles and slumps continuing.

Positively, the Nets first round draft picks performed well. Cam Thomas continued to show he belongs in the rotation as a secondary shot creator and built off his performance on Sunday. Coming off the bench, Thomas scored 21 points, and was the Nets third leading scorer behind Durant and Irving. Thomas shot 66 percent from the field, and hitting four threes on seven attempts. As the Nets continue this season, they will need Thomas to keep scoring efficiently to bring a boost to offense.

Day’Ron Sharpe also had himself a game. He made most of his opportunity, playing in more minutes with LaMarcus Aldridge out and Nic Claxton in foul trouble. Sharpe was perfect from the field, bullying his way to the basket with 14 points. His high energy in the paint helped bring in seven rebounds for the Nets. Sharpe can become a big part of the rotation if he keeps the momentum going. His big body can matchup with bulkier centers and his aggressiveness can help Brooklyn on the boards.

The constant theme throughout the season has been experimentation with the rotation. That happened again as head coach Steve Nash continued to employ a variety of lineups. Long-term the experimentation should be beneficial, but at this point Nash should know what players are positives on the court. This is important to realize, especially with Durant, Irving, and Harden playing heavy minutes.

Outside of the Big Three, the main players that should be part of the rotation are Nic Claxton, Patty Mills, Cam Thomas, Joe Harris (when he returns from injury), DeAndre’ Bembry, LaMarcus Aldridge. That’s enough for a solid nine-man rotation. Those rotations alone should alleviate pressure and possibly lower the minute load for the Big Three. Depending on matchups and available personnel, the Nets can add in rookies Kessler Edwards, Day’Ron Sharpe, and David Duke Jr. or veteran James Johnson off the bench. If Nash doesn’t choose to bring in the rookies, he has to hope that Bruce Brown and Paul Millsap find their groove again if they are going to be relied on in the rotation.

Also, it is officially trade and buyout season. To possibly solve the rotation issues and roster logjam, the Nets could look for outside help. With possible buyout or trade candidates in veterans Thaddeus Young, Daniel Theis, Goran Dragić, and more available. Could the Nets use their trade exception to make a move or wait to sign them in the buyout market? General Manager Sean Marks will have decisions to make if he wants to improve the roster for a strong championship push.

As preached throughout the season, the Nets always think long-term and being patient. The season is still long and there is time for the Nets to figure it out for the playoffs. Though there are no excuses for Brooklyn, it is imperative that the Nets have the sense of urgency to end this January slump. The Nets rallying together and stringing together good wins would build good momentum for Brooklyn to head into the playoffs.

Like Durant said, championship teams will face adversity. How the Nets respond and break through the wall is what determines how the rest of the season will fare. Once the Nets figure things out, they will be a force to be reckoned with.

Looking Forward to the Next Game

Due to game postponements, the Nets schedule will be a little brutal. Coming off a back-to-back, the team will start another back-to-back on Wednesday, January 12. The Nets will travel to Chicago to take on the Bulls in a marquee matchup between to the top two seeds in the East. After missing James Harden and avoiding scaring injury to Kyrie Irving on Monday, the Big Three should all play this next game. The Bulls have won the previous two matchups against the Nets. Tip-off will be another late one, at 10 p.m. EST.

Brooklyn is currently 25–14 and second place in the Eastern Conference, sitting two games behind the aforementioned first place Chicago Bulls.