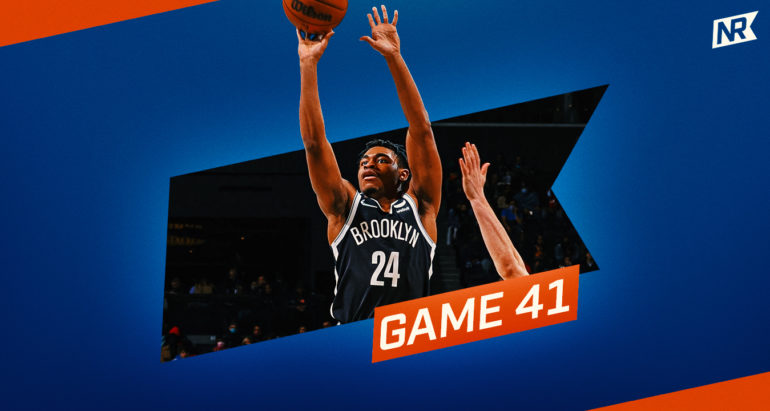 The Brooklyn Nets entered Thursday night’s game on the heels of a triumphant win in Chicago against the Bulls. Upon arriving home from the late game, they had a brief turnaround before their fourth game in five nights against the Oklahoma City Thunder. Kevin Durant was scratched from the lineup prior to the game, leaving James Harden as the only member of the Big Three to play.

The Nets started off well, as Harden fed emergency starter Kessler Edwards for a dunk to start the game. Sadly, that was one of the rare positive moments for Brooklyn in this game. The Nets quickly gave up a double-digit lead to the Thunder in the first quarter, and Oklahoma City cruised through the rest of the game as they topped the Brooklyn Nets 130–109. Brooklyn allowed their largest point total of the season against the worst offense in the league in a defensive performance that was tough to watch.

Brooklyn’s defense certainly suffered from their recent heavy slate of games in this one. However, the short-handed Nets were ultimately outclassed against a team near the bottom of the NBA standings. Brooklyn fans will want to forget about this one quickly, but here are a few takeaways.

James Harden Toughs It Out

The first few plays of this game went quite well for the Brooklyn Nets and James Harden. Harden scored five quick points after setting Kessler Edwards up for a dunk for the game’s first points. The Nets went up 7–2, and for a moment this game looked good for Brooklyn.

That moment did not exactly last for long; OKC quickly pushed the lead to double-digits as the Nets went ice-cold from the floor. Harden did what he could to drag the Nets along offensively, but it wasn’t enough. Harden finished with 26 points on 22 shots, along with nine assists, and seven rebounds. He played 36 minutes—more than anyone else on either team—but his offense couldn’t overcome Brooklyn’s rough defensive night in this one.

Cam Thomas had a slow start to this game, as he played less than two minutes in the first quarter off the bench. He scored only two points in the second quarter, but did play most of the second quarter in an attempt to kick-start Brooklyn’s very inconsistent scoring in this game.

The first half was forgettable for Cam, but his second half was a rare bright spot in this game. Thomas scored 19 points in 13 shots in the second half, getting into the lane for floaters and converting on mid-range looks. He helped Brooklyn to keep up with Oklahoma City during its run in the fourth quarter. After closing the lead to ten in the third quarter, the Brooklyn Nets got within single digits early in the fourth. While that run was ultimately not enough to keep Brooklyn close in the closing moments, Thomas shot the ball well in that fourth quarter charge. This was a tough night for the Nets overall, but Cam Thomas provided many of the rare positive moments.

Kessler Edwards Gets a Look

After getting his second career start against Chicago on Wednesday, Kessler Edwards started his second straight game in this one. He started the game off strong, scoring Brooklyn’s first points on a breakaway dunk. He also pulled up into a smooth mid-range jumper soon after that, and it looked like he might get in a groove early.

Sadly, the Kessler Edwards breakout game was not meant to be, as he did not have a fantastic night overall. He finished with nine points on 4–10 shooting from the floor, and occasionally lost Lu Dort on offense, contributing to Dort’s 27-point night with a few late closeouts.

Still, there were flashes of potential from Edwards in this game that were really positive. He added a jaw-dropping putback dunk late in the fourth quarter to his early game dunk. Edwards also got Dort back for some of his earlier scoring by emphatically block him at the rim early in the fourth quarter.

The Nets had cut the Thunder lead to 104-96 in that moment, and the Edwards block looked like it might turn the game around. Sadly, the Nets never got closer than that eight-point deficit. Fans will quickly want to forget this game, but James Harden’s Iron Man effort and the highlight plays from Edwards and Thomas were good moments in a difficult loss.