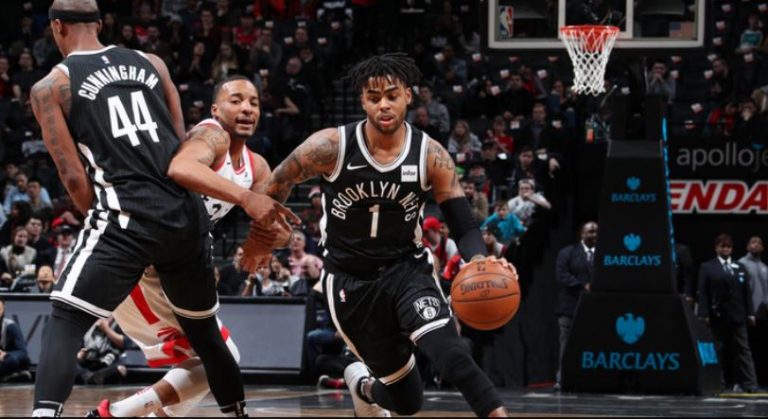 It’s been another tough skid for the Brooklyn Nets. After dropping the two most recent contests against the Toronto Raptors and Philadelphia 76ers, they’ve fallen to 21-47 overall and 1-4 in their last five games. Injuries haven’t been kind to them, but there are also lingering issues on the court that have severely stifled the Brooklyn Nets chances of winning.

In their last two games, Brooklyn has failed to rebound the ball consistently. They’ve also had immense struggles trying to slow down both Joel Embiid and Jonas Valanciunas. Jarrett Allen wasn’t present versus Toronto and only played 15 minutes against Philly. His injury forced Kenny Atkinson’s hand. To try and offset the size, he’s been running smaller lineups that are quicker and more athletic. Those rotations, however, are still liabilities if there’s a towering center on the court.

That issue is new. Brooklyn hasn’t changed much. Shot selection is atrocious at times. Their decision-making is that of someone wearing a blindfold. The good news is that it’s improved as the year has gone on. Unfortunately, young players are prone to doing those things, but they can compete with anybody when they’re executing beyond their years.

Against the Philadelphia 76ers on Sunday, the Nets committed 18 turnovers, and the Sixers generated 22 points off of them. The final score was 120-97. And there’s one reason why the margin was so grand. Only three players that evening didn’t have a giveaway (Quincy Acy, Nik Stauskas, Allen). That’s unacceptable. What makes matters worse is that the Nets trailed by only 10 points at the half. They shot themselves in the foot, particularly in the fourth quarter where they had six turnovers. Philadelphia got up 27 shots that quarter. Brooklyn finished at 16.

Playoff teams with All-Star caliber talent will dominate lesser opponents who squander opportunities. It was an awful performance. The Sixers’ momentum started to snowball. Before you know it, the game is over, and you’ve allowed your opponent to shoot 52.6 percent from the field. As easy as it would blame Jarrett Allen’s absence on the defensive meltdown, it’s impossible because he played. The outing wasn’t lengthy, but nothing changed when he was on the court.

Use The Russell-Dinwiddie Duo More Often

D’Angelo Russell played 34 minutes against the Raptors, and Spencer Dinwiddie finished with 28. In the fourth, they played nine and four, respectively. Kenny Atkinson kept Caris LeVert on the court for most of the period. It’s bizarre since Dinwiddie and Russell pair quite nicely together.

By nature, Russell is a shooting guard. Initiating the offense and facilitating isn’t natural for him. Playing out of position is what caused some of his struggles in Los Angeles. Dinwiddie is more of that type, and that’s a luxury because Brooklyn doesn’t have to watch Russell isolate against the defense every time down.

Should the Brooklyn Nets choose to, Atkinson can get the offense moving and open up some shots for Russell. He made his first three treys on Tuesday off of a mixture of player and ball movement. Down the stretch of that same game, the offense was struggling mightily and went 5-of-20. Russell was 2-of-8. Not having Dinwiddie on the floor to regroup everyone came back to haunt them.

History: Last season the 76ers won the season series three games to one, while the squads have split this season’s previous meetings. The 76ers hold the all-time record having bested the Nets in 109 of their 190 matches.

Odds: Unsurprisingly the 76ers are favored to win the game with a spread of 8.5 points and an over-under of 218.5 points.

Notably if Jarrett Allen can’t go Kenny Atkinson will likely start Dante Cunningham in his stead. As for Crabbe, he could be replaced by a number of Nets though smart money would be on Rondae Hollis-Jefferson taking his spot.