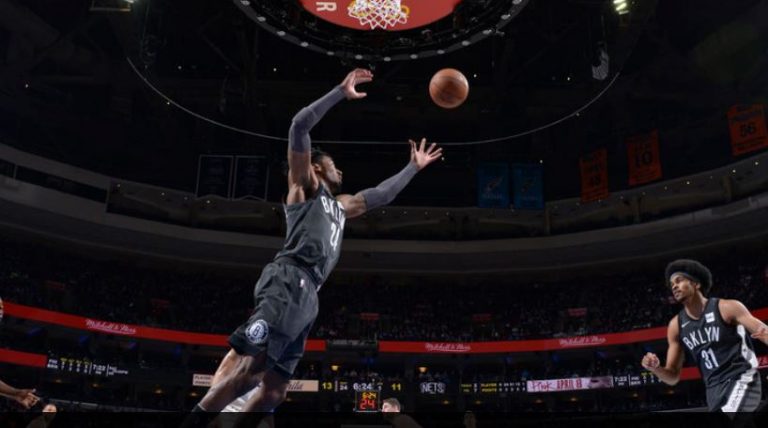 The Brooklyn Nets found a way to blow another big lead in what has become a recurring theme this season. This time it was the Philadelphia 76ers who were the beneficiary of a Nets collapse as the 76ers defeated Brooklyn 120-116. The loss was the Nets 19th in their last 22 games. Brooklyn now sits 27 games under .500 as another lost season plays out in the next month.

Kenny Atkinson made some surprising pregame adjustments as Spencer Dinwiddie was shuffled out of the starting lineup in favor of Joe Harris and Rondae Hollis-Jefferson. Hollis-Jefferson responded by posting a team-high 21 points to go along with 10 rebounds and five assists in 27 minutes. Harris responded with 11 points and six assists while draining three of his six attempts from the 3-point line. Harris played a game-high 36 minutes.

The Nets bench performed well despite the loss. Dinwiddie played 31 minutes, more than starter D’Angelo Russell, and scored 14 points to go along with five assists and three rebounds. Dinwiddie was also involved in the game’s deciding play as the fourth year guard out of Colorado drove to the rim down by 1 in the final 30 seconds. The refs, as they have often done this season, neglected to call a foul despite heavy contact. Joel Embiid was able to snag the rebound and drained two free throws at the other end. Another one had bitten the dust.

The Nets are far out of the playoffs and don’t even have a draft pick to tank for. This season has flown off the rails as the team has taken a free fall since February began. As was the case last season, the Nets will use this final month to evaluate its young pieces. With contract extensions looming for several young players, the Nets may have to decide who is worth keeping long-term.

Russell, Hollis-Jefferson and Dinwiddie – does one have to go?

The Nets do not have many long-term salaries clogging their cap. Timofey Mozgov owns the team’s one true albatross and even he has only two years left on his deal. Regardless, the Nets will presumably be adding long-term money when their two first round selections from the 2015 draft look to cash out with their rookie-scale extensions this October.

Russell is in line for a big payday after proving this season that he can score. This year, in a career-low 25 minutes per game, Russell is averaging 16 points at a career-best 42 percent clip. Though he has yet to prove he can commandeer the offense, he has also not been given a proper chance. Injuries have hampered his first year in Brooklyn.

Hollis-Jefferson on the other hand has enjoyed a breakout season. He is averaging career-highs across the board and has improved his offensive game in a big way. The Arizona product has added an effective mid-range game, often times being relied on as a go-to scorer. Hollis-Jefferson has also continued to show value on the defensive end, as his absence was a major reason why the team fell out of the playoff picture.

Those two could receive big extensions this coming Fall. But what does that mean for Dinwiddie? While the D-Leaguer-turned-Most Improved candidate has stepped up in Russell’s absence this season, he could be due for a big payday. With Brooklyn already likely handing out big money to Russell, that could leave Dinwiddie in an awkward spot.

Sean Marks should do everything in his power to keep the unsung hero of the Nets mostly miserable season. It will be a tough choice however with the team still in rebuilding mode and not trying to exceed the salary cap. While Marks did have offers for Dinwiddie (Cleveland was willing to part with its first round pick at the trade deadline) he ultimately chose to keep him. Hopefully Marks does the same this coming offseason.

Jarrett Allen has a long way to go

Jarrett Allen has been a pleasant surprise this season. He was originally not expected to contribute in a meaningful way this season and many even thought he’d be a fixture on the team’s G-League affiliate, the Long Island Nets. Instead, Allen has become the team’s starter after trading away Tyler Zeller and Mozgov proving he was just filler in the Russell deal.

Though he has been impressive for the most part, nights like tonight remind us how far he has to go. His counterpart, Embiid, dominated Brooklyn en route to 24 points and 19 rebounds. Often times, Allen was completely outmatched by Philadelphia’s All-Star behemoth. At 19 years old that is expected of Allen.

For the Nets to become a competitive team next season, it cannot be the norm.

Harris has a place in Brooklyn

Joe Harris may not have improved as much as Dinwiddie, but he has carved out a role on this Nets team. Harris is second in the league in efficiency around the rim and has shot the 3-pointer better than anyone else on the team. Harris is a free agent this summer and should be highly sought after by pretty much every team in the league.

Marks cannot let him go, though. Unearthing Harris was one of Marks’ great accomplishments so far as general manager. He now must do whatever it takes to keep him.

If that means shelling out a deal upwards of $8 million, it is definitely a gamble Marks must make. Harris has been that valuable for Brooklyn this season.