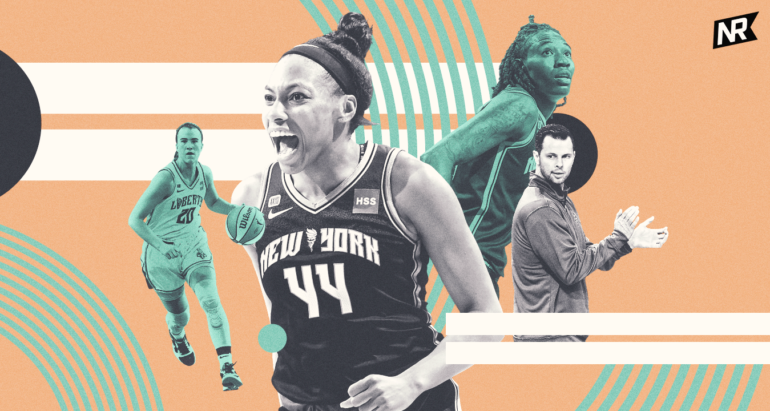 The New York Liberty have now played over half of their 32 games this season. Through their 18 games, they have a record of 9-9 overall (4-4 at home, 5-5 on the road), playing evenly across the board. Let’s take a closer look to see how they’ve played so far.

The Liberty started the season on a high note. Sabrina Ionescu was back and healthy. They added Betnijah Laney to the team, as well as Natasha Howard and Sami Whitcomb. Expectations were higher this time around. In that very first game, they performed exactly like it. Sabrina Ionescu hit a game-winner, she finished the game with 25 points, 11 assists, and six rebounds. Laney had 30 points in her first game as a member of the New York Liberty. Another newcomer, rookie Michaela Onyenwere, had a solid debut herself, finishing with 18 points and five rebounds. They did all of this at home, in front of their fans.

The Liberty then went on the road to Indiana and won their first road game. They lost their first game in a blowout loss to the Washington Mystics that featured former Liberty franchise player Tina Charles. At this point of the season, the Liberty was still playing really well. They were 5-1 before it all changed.

Examining the Liberty’s wins and losses

The Liberty fell to the Atlanta Dream at home in overtime on a Courtney Williams three-pointer with just 1.6 seconds remaining in the game. This was a turning point in the season because they lost Natasha Howard for 4-6 weeks to a sprained MCL in this game. Sabrina Ionescu struggled in that game because the Dream guards Courtney Williams and Tiffany Hayes did an excellent job defending her. They lost two straight games after the Dream loss to the likes of the Las Vegas Aces and the Connecticut Sun, both teams currently in the top three in the WNBA standings. Onyenwere had to defend the likes of A’ja Wilson and Jonquel Jones in those games, which is tough for any player, yet alone a rookie. A’ja Wilson had 30 points/13 rebounds in the Aces win. Jonquel Jones finished with 31 points/13 rebounds in the Sun’s win. They then rotated wins and losses. Win a game, lose two more.

It’s been a bumpy ride since the hot start to begin the season. Sabrina Ionescu was out for a couple of games due to left ankle tendinitis and she’s still not fully recovered from it. She came off the bench for some games when she returned because Coach Walt Hopkins wanted to ease her back in slowly coming back from injury before she was reinstated as a starter. Natasha Howard is still working back from her injury. Rookie Michaela Onyenwere struggled after such a strong start to the beginning of the season, but after that she was held to single digit scoring in her next six straight games. She eventually rebounded against the Chicago Sky in a loss and has scored in double figures in four straight since.

Taking a closer look at the Liberty wins and losses, they have only one signature win against the top teams in the league. That was against the Chicago Sky, who were missing both Candace Parker and Allie Quigley at the time, and in the midst of their own slide (a seven-game losing streak). The rest of the victories have come against teams who are currently at the bottom in the WNBA standings. This clearly shows that the Liberty can beat teams who are below them in the standings but they will need at least four or five more wins from potential playoff teams if they want to stay in the playoff hunt. Right now, New York is in sixth place in the WNBA standings, though just 2.5 games separate fourth place from 11th.

Taking a closer look at the numbers

Betnijah Laney, recently named to her first All-Star Game, has been a steadying force on the team. She’s putting up averages of 19.7 PPG (sixth-most in the league), 4.1 rebounds per game (RPG), and 5.2 assists per game (also sixth-most in the league), so she is going to attract a ton of attention from opposing defenses. Despite all of that, she is shooting 50 percent from the field and 32.3 percent from long range. Sami Whitcomb is the team’s next leading scorer, scoring 11.9 PPG, though she’s been inconsistent scoring the ball. She has had six games in which she failed to score in double-digits, but also has a recent 30-point game under her belt. She’s shooting 49.3 percent from two and 44.8 percent from three (the latter leads the team). Both of these players were not on the roster last season, but have lifted the Liberty’s offense this season.

In terms of their defense, they do have solid defenders in Laney, rookie DiDi Richards, and Jazmine Jones. Richards plays 8.3 minutes per game (MPG) while Jones plays 17.5 MPG. Other than Laney who is a capable scorer, the Liberty struggle in terms of offense when both are on the floor because they do not have the offensive firepower that Ionescu or Whitcomb bring. Despite not being 100 percent, Ionescu is averaging 10.8 PPG, third overall on the team.

A solution could be to play Laney, Jones, Ionescu, Shook, and Rebecca Allen together to see how well that lineup could play out. There would be two playmakers on the floor in Laney and Ionescu. Solid defenders in Laney and Jones and some three-point shooting to help spread the floor from Jones who is shooting 42.4 percent from three as well as Allen. This could really help Laney create some more opportunities for herself as the Liberty’s net rating currently is -5.2, tied for 10th among the W’s 12 teams.

This team is still a work in progress. They have been up and down in the first half of the season. It’s important that Ionescu returns to good health, because the Liberty really need her playmaking skills so that Laney can be even more effective on the floor and not having to be consistently surrounded by double teams. The Liberty released Kiah Stokes recently and re-signed Reshanda Gray. Gray will be able to help in terms of rebounding. In just under 16.2 MPG, she has put up 7.1 PPG and 3.6 RPG.

For now, they are a fringe playoff team, a work in progress. When Natasha Howard returns, it will help the Liberty because they add additional scoring, rebounding, and solid defense in the post. After the Olympic break, with a healthy trio of Laney, Ionescu, and Howard, the Liberty can finish the season on a high note and potentially make some noise in the postseason.