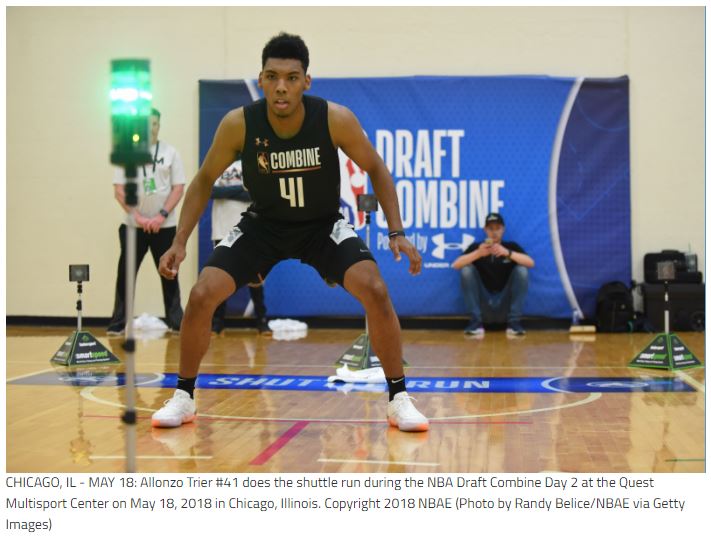 Completing the Brook-Lin roundtable series on the draft the team dives into specifics. In this final segment of the draft roundtable we look at who Sean Marks should consider moving and/or packaging to land a lottery pick.

With the Cavaliers selecting eighth it fulfills the final obligation of the nightmare trade with the Celtics five seasons ago. Thus the handcuffs are finally off.

As for the home team the Brooklyn Nets do get a first round pick courtesy of the Raptors trade to land DeMarre Carroll. This translates into Sean Marks selecting 29th in the first round. In addition the Brooklyn Nets have two second round picks. The first comes via the Lakers at 4oth and the 45th pick via the Bucks.

With that let’s begin the final segment of the three part roundtable draft segment.

In a deep draft the Brooklyn Nets have three picks. Do you consider packaging one, two or all three, either with a player or players to move up in the draft or to grab talent?

There are certainly some intriguing options in this draft that might be worth trading some picks. The Nets have two second-round picks in this draft in addition to the Toronto first-round pick at 29th overall, but the Nets need another star player badly. D’Angelo Russell definitely has All-Star upside, but I’m not sure I see him as an All-NBA type of talent. Jarrett Allen might be an All-NBA player some day, but he’s also not really an offensive focal point. The Nets will need a third option even if Russell and Allen manage to maximize their potential, and that kind of star player is hard to find at the bottom of the first round.

The Nets will probably not be able to move up into the Top 10 with their current pool of assets, but I would be willing to trade the Toronto pick and the Lakers pick (#29 and #40) to move up into the 15-20 range. There are some players who will fall in that part of the draft who I think could be great fits for the Nets–if Miles Bridges falls out of the lottery, I think the Nets should do everything they can to get him.

If the Brooklyn Nets cannot trade up to secure a pick in the middle of the first round (the 15-20 range), they should sit on their assets and take as many swings as possible in the second round with paying cash for draft picks. There will be some quality players in the 20-40 range of this draft, and there won’t be much of a difference in the quality of player from #20 to #40. With that in mind, the Brooklyn Nets shouldn’t look to move up in the draft if they can’t get higher than around #20.

Although this is a deep draft, the Brooklyn Nets still don’t have a lottery pick or a pick of exceptionally high-value so whatever they can manage to net in a trade likely won’t be worth whoever they get in the draft. This year we saw an abnormal number of teams tanking for draft positioning inside of the top ten so even if those teams were willing to give up a draft pick, the Nets would probably need to send away an uncomfortably big package away just to get a decent draft pick.

If I were Sean Marks, I would probably sit on my hands this time around unless an offer too good to pass up comes my way for two reasons. Firstly, the talent pool tends to drop off at around the 13th pick and even then, those players are pretty indistinguishable so trading picks to move up just slightly doesn’t entirely make sense to me. Secondly, because the talent pool is fairly indistinguishable I would take my chances on one of the three guys I draft panning out somewhere down the line.

There’s a chance I’m wrong about this but from a historical perspective, betting on three mid-first rounders will likely yield a greater result (just ask the Lakers about Kyle Kuzma), than putting all the chips on the line for a player with a slightly lower chance of busting out of the league.

The NBA Draft tends to be such a crapshoot that a team tends to do better with a quantity of lottery tickets rather than throwing all eggs in one basket. Especially in a draft class that may yield multiple quality players. Plus, teams all evaluate talent differently. The prospect Marks may consider trading up to get in the lottery could fall to 28 or so because of a myriad of reasons. Personally, I have many prospects I consider lottery-worthy talents who seem more likely to be end of the first round or second round picks. I wouldn’t mind being patient and trusting those prospects pan out more than the consensus picks.

This draft is loaded with big men at the top of the board. The Brooklyn Nets sure could use a floor spacing power forward, so packaging picks makes sense. However, there may be big men who can shoot available with the 29th pick such as Moritz Wagner. That said, Sean Marks may want to move up higher to land one of the better prospects.

If Marks can address the clubs need for a floor spacing big then arguably his better move might be to package the two second round picks to garner a better talent higher up the board. Marks has shown the propensity to land talent and willingness to take risks. For example, many clubs moved off Caris LeVert while the Nets GM saw his potential. Teams like the Raptors have demonstrated players with more College experience can pay immediate dividends. Fred VanVleet wasn’t drafted, however his experience at Wichita State easily transferred to the pros.

This past weekend, Suns GM, Ryan McDonough told the panel at the combine Phoenix would be open to move the first round pick for talent. First of all, don’t expect the Suns to give up their first ever top ranked pick. When McDonough said for the ‘right asset’ he’s talking about an established young star or LeBron James. Barring the sky falling that’s not going to occur. However, there may be teams in need of guards who have a lottery pick and this should be something Marks should pursue. If he can land another core piece with star potential for Spencer Dinwiddie or DeMarre Carroll it’s something the Nets have to pursue.

I grab the talent on the board. If I am the Brooklyn Nets, I try to get a shooting power forward, a power forward/Center hybrid and possibly a small forward.

Moritz Porter is a 6’11 power forward who can flat out shoot. Built for todays game, Moritz shot an impressive 39.5 percent from three for Michigan and is a decent rebounder (7.1 rebounds per game). He needs to develop his strength but seems like a logical choice if Brooklyn move forward with Jarrett Allen as their starting Center.

An intriguing pick is power forward Bruno Fernando. At 19 years old, 6’10 and a 7’4 wingspan, he shows potential as a defensive force with a developing offensive game.

Radions Kurucks is a Spanish small forward who plays for Barcelona’s development team. He already has had his fair share of controversy in his homeland and has caused riffs with every team he has been on. However, he can score off the bounce and creates his own offense. He tends to become tunnels visioned with the rock but Brooklyn need another scorer who can create his own shot. The only question is will he be a problem coming to Brooklyn.

Jontay Porter is another player I would look at as a hybrid power forward/center shows a tremendous amount of potential as a defensive anchor. Porter averaged 1.7 blocks this college season while also shooting 36 percent from distance. There is some uncertainty as whether he will forgo the draft and return to Missouri but if he stays in, he’s a do it all forward.