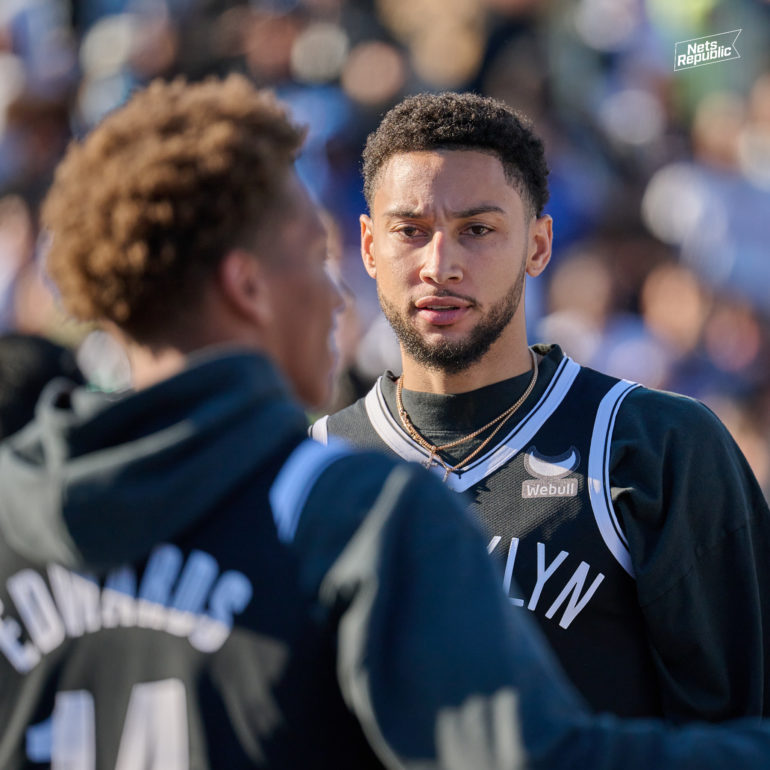 As long as Kevin Durant and Kyrie Irving (7/11) are healthy, the Nets will be an elite and versatile offense due to the gravity they command and their comfortability scoring from everywhere. They’ve proven that regardless of the spacing/personnel around them they’re an elite offensive tandem, and I don’t expect that to change this season.

In the 7/11 Era, the Nets have had an Offensive Rating of 123.65 per Cleaning the Glass (by far the best mark in the NBA) when they share the court with Harden off. With Ben Simmons thriving in transition and with more athleticism on the roster this year, I expect the Nets to be among the league leaders in pace and Transition Points Per Possession. The biggest weakness of last year’s Nets offense post-Harden trade was their Rim Pressure and Rim Finishing; a healthy Ben Simmons turns both of those weaknesses into strengths.

My biggest question about Brooklyn’s offense is whether Nic Claxton and Simmons can play together against fellow title contenders. Despite spacing and shooting being emphasized more since the start of the Warriors Dynasty, your best lineup being able to play 4-out 1-in has been a necessity to win the championship in essentially every year since 2000. Even a team like the ’04 Pistons, who were 18th in Offensive Rating featured that due to Rasheed Wallace’s ability to step out and make jumpers. If the Nets were to win the title with Kyrie, Royce, KD, Ben, and Clax as their best lineup with 2 non-spacers/shooting threats (Ben/Clax), they would be the exception to a norm that has lasted over a generation.

While Ben at Center seems like the obvious alternative to maximize spacing, throughout his career those lineups have never been as effective defensively as most people think. Although the sample size isn’t very large I do believe that Ben at the 5 can work against teams that don’t have traditional Bigs. The simple alternative to me is actually to make Kyrie Irving and Kevin Durant the main offensive initiators.

Despite not being a floor spacer, Ben still possesses gravity as a roller. His ability as a finisher demands that help has to come and once that help does come, a lob to Claxton in the dunker spot or a pass to a shooter (Royce/Kyrie/Joe, etc.) is a likely outcome. It’s the easiest way to generate efficient offense consistently while masking potential spacing issues.

The Nets Starting 5 is built to be an elite playoff defense. Outside of the Celtics and the Clippers, you can argue that the Nets are the most switchable team in the league. Size, defensive versatility (mainly through switching), and rim protection are necessary to win in the Playoffs during the Modern NBA.

The Nets Starting 5 is Complete at every level of Defense.

Defensive depth is a weakness. Once you get past the Top 7 of the likely playoff rotation, 8-10 features many smaller, one-way players. Trading Seth Curry for a bigger player who can’t get hunted in the playoffs or Joe Harris for another wing or big player may prove to be the logical move if the Nets want to improve their overall depth defensively. Despite all of that, if the stars play 80% of the games this year, I would be shocked if they aren’t a Top 10 Defense. And by playoff time, I can easily see them performing at a Top 5 level.

I think the Nets “can” win a championship as currently constructed, but they are one piece away from being able to go toe to toe with any team on both sides of the ball. I’ve consistently said that piece is a Stretch 5 that can also defend (very few of these guys exist.)

They have a championship-level offense and a championship-level defense, but the biggest concern is, does their best lineup feature the perfect mix of both of these things? Does Nic Claxton/Ben Simmons together clog up the paint offensively too much for Royce/KD/Ben/Claxton being great defensively to matter? Those are legitimate questions that can only be answered on the court over time.

However, if any team can win with two non-floor spacers in 2022, it’s a team led by the Shot Creation/Playmaking of Kyrie Irving and Kevin Durant. A lot of revisionist history has been written about the 7/11 Nets. In 2020-2021 they likely would have won the title even after Harden’s injury if Kyrie doesn’t also get hurt, and last year in 2021-22 they were 36-19 (1-seed pace) with KD on the court with a Net Rating of +7.0.

With an entire season of continuity and a bigger/more versatile roster, I expect the Nets to look closer to the 20-21 Nets (Title Caliber) than the 21-22 Nets (Underachieving, first-round exit). I don’t see a team outside of the Celtics, Clippers, or Warriors capable of beating this current Nets in a 7-game series even if they don’t make another move. However, I also don’t think the piece that potentially puts the Nets over the top is currently on the roster as of opening night.