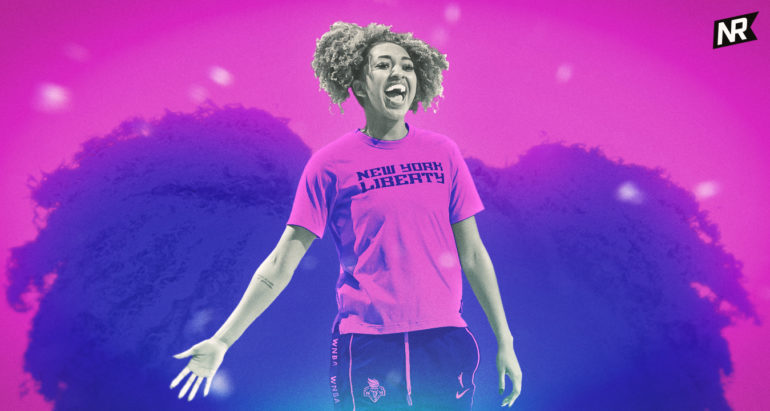 The Liberty earned a trip to the postseason for the first time since 2017, and two of the main catalysts on the team have been the rookies. Michaela Onyenwere, picked sixth, is all but assured to become the Rookie of the Year, having won the monthly accolade in each of the four months it was awarded. Another key part of the rotation, especially in the second half of the season, was DiDi Richards, selected 17th overall. This season, according to Across the Timeline, just a dozen rookies saw 100 minutes of court time, a substantially lower number than years past.

Still, all year long, DiDi Richards has talked about making the most of her opportunities when she’s gotten them. A few weeks back, I spoke to the rookie guard out of Baylor to get a feel for how she’s acclimated, now with a full regular season of WNBA experience.

Myles Ehrlich, Nets Republic: The turnaround from the end of the NCAA tournament to the draft to training camp, from Texas to New York, is impossible for me to comprehend. What was the hardest lifestyle change or transition for you?

DiDi Richards: It’s just having a support system really, but I think New York did a great job at making me feel wanted. I think I remember that my first game: when I checked in, the fans went crazy and that’s when I knew that I was proud to call this place my new home.

NR: What was the hardest lifestyle change or transition for you?

DiDi Richards: It’s just not having my mom at every single game, and my dad and my brother… It was cool things like that that I’m gonna miss, and that I did miss for a long time now I’m loving it here, honestly. We play [Dallas] on September 11** and I’m counting down the days, I’m checking them off. My mom came to my first game. She got to experience all that with me and she was really excited about it. She was like, “Did you hear me cheering?!”

** Note: This interview took place before that Dallas game, but I followed up and here’s how that went for DiDi:

DiDi Richards: It was so special. My paw-paw doesn’t travel ever. He was at the game to surprise me. I think that’s the one thing I’ll remember. I had about 40-50 people there: family and a couple of Baylor fans and a couple of friends, so it was exciting.

NR: You’re still so close with [Connecticut Sun guard] DiJonai Carrington, who you played with at Baylor. How is it to have that experience with someone that you knew you could lean on, even though she’s no longer on your team?

DiDi Richards: It was everything. We literally posted our declaring for the draft picture at the same time at the Mexican restaurant at Waco, and it was just a breath of fresh air to share that with someone that was going through the exact same thing with me: the quick change, the moving across the country, stuff like that.”

NR: And then you have some other former Baylor teammates that went pro before you—did you talk to any of them?

DiDi Richards: Definitely Lani [Kalani Brown] and Chloe Jackson. I called both of them as soon as I decided, because I felt like my situation and situation for this class was a lot tougher because we had the option to come back, and that made it really difficult. But I talked to them and they kept telling me, “Wherever your heart goes, go for it. It was a great speech for me like from Chloe because I definitely was torn between either going to make your money or stay back with something I loved. But for me, at the end of the day, I think I would have been staying more for comfort.

NR: And I got some numbers to throw at you. So, Michaela led all rookies with 721 minutes played. And only four from your class: Michaela, Aari MacDonald (493 minutes), Charli Collier (345 minutes), and you (346 minutes) have played more than 300 minutes per game, or total this season. So much of success is opportunity and New York was a great landing spot for both of you. But, what do you think the WNBA could do for future classes, so a lot of you aren’t sitting on the end of the bench without an opportunity to get onto the floor?

DiDi Richards: I really don’t want to blame the WNBA, other than the fact that we need more teams. That’s something that everybody can harp on, but with money involved in it makes it a little difficult.

Other than that, I think it’s just being in the right place at the right time, which is more of the luck of your draw at that point. I think me and Mic got lucky, but it’s more about being ready when your name is called, and then making your mark when you’re finally on the court. I think Michaela did a good job and once she started the first game. She made it known: “I should be starting and I should be here.” When I played my first game or games, I made a point that I’m an energy player: when you need something, just throw me out there. So, I think it’s really just waiting for your opportunity and, when it’s there, taking advantage of it.

NR: Do you think that something like expanded rosters or like an injury spot because you guys have been carrying Jocelyn Willoughby on the active roster all season, even though she can’t play. Do you think that might be a way like in the interim until we could financially get to the point for expansion?

DiDi Richards: I mean, that can help, yes. But I can speak for Joce because I’m sitting here firsthand. She makes her mark on a team without playing. She doesn’t have to touch the court to make an impact. We watched her in training camp how she led the team before she got hurt.

It is kind of, again, the luck of the draw. If you’re here, you’re here, and if you’re not, you’re not. Once you’re here, make your mark and make them know that they can’t get rid of you. Everybody knows, if you get rid of Joce, she’s gonna get picked up somewhere else.

NR: Talking about Walt and this coaching staff, we’ve seen a lot of evolution from your game, especially on the offensive end. You’re leading all rookies in three-point shooting percentage after taking just one attempt in college. Can you talk a little bit about what they’ve worked on most with you?

DiDi Richards: It definitely is Dustin [Gray]. He’s in the gym with me 24/7, I want to say. And it’s literally—he won’t admit it—but he definitely reconstructed my shot. Other than that, though, you can reconstruct your shot, but you still need to put in the work and gain confidence in it. The confidence comes from the people around you. I want to say that the coaching staff and my teammates, they do a good job at making me feel confident on the offensive end. So, I think it’s definitely just being around these people and having them believe in me the way they do. It makes it a lot easier to go down there and shoot a couple of threes—like you said, a lot more than I did in college.

The shooting was a great place to leave off, because after attempting (and missing) just one shot from long range in college, as a freshman, DiDi led all rookies in three-point percentage, hitting 10 of her 22 attempts for a 45.5-percent clip. While the volume isn’t there yet, her confidence is growing. Following the Olympics break, Richards made nine-of-16 from deep, including hitting four-of-five in a game against Phoenix on August 25.

Everyone knew about DiDi’s defensive aptitude coming into the season: her length and her versatility made her pro-ready on that end of the court. If she was a non-factor on the offensive end, though, any advantage she brought would be nullified. With her ability to cut and willingness to shoot—and knock down—threes, Richards’ growth has made her an instant favorite of both fans and teammates alike.

Richards hit both of her shots in her playoff debut on Thursday night, a one-point loss to the heavily favored Phoenix Mercury. Be assured that Coach Hopkins was not surprised, knowing that no moment will ever be too large for the protean guard-slash-forward. “With DiDi, there’s a determination and a self-belief that goes into her ability to rise,” Hopkins said. “If DiDi gets one minute, she’s gonna make something happen. Because of that, the stakes of the game don’t matter for her.”