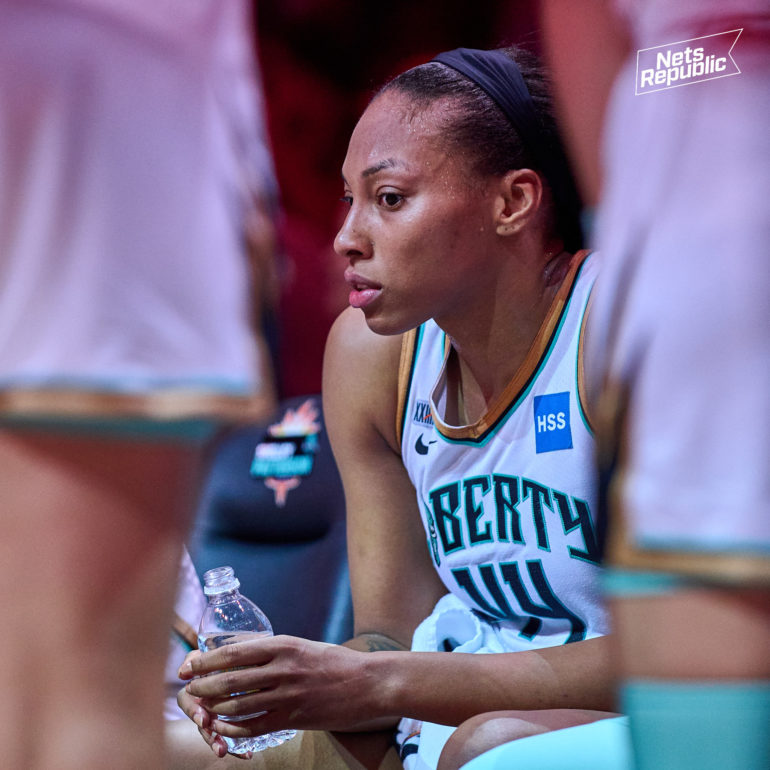 The New York Liberty know the ending of their playoff drought is step one of a grander plan, but look forward to the Western challenge ahead.

If one were scripting a metropolitan basketball story for the screen, the New York Liberty’s saga of the year 2021 would be like one of the many modern film franchises that are preparing for several explosive sequels.

It was difficult to define exactly what one could reasonably expect from the Liberty as they unveiled one of the most intriguing plots of the 2021 WNBA season: a hybrid rebuild, an intriguing new map graphed by the Liberty’s leadership triumvirate of head coach Walt Hopkins, general manager Jonathan Kolb, and CEO Keia Clarke.

Kolb himself tried to pen the definition of a hybrid rebuild for the WNBA glossary when the Liberty earned the top overall pick of the 2021 draft in December. That early Christmas gift was shipped off to Dallas in a multi-team team that landed defending champions Natasha Howard and Sami Whitcomb in seafoam.

“We have a really exciting opportunity to kind of have a hybrid rebuild… where we can be super competitive right now while bringing along the future of the Liberty down the road,” Kolb said after the ping pong balls bounced the Liberty’s way. “So that’s what we’re going to try to do. We have a plan, and we’ll see how it goes.”

No one was expecting New York to break into the WNBA’s penthouse—even after a scorching 5-1 start—but a reclamation project whose origins took on nomadic burdens through White Plains and Bradenton, one cursed by the roundball deities every step of the way finally found some stability and a home base on Brooklyn’s Atlantic Avenue to do so.

Part one has had its share of drama, heartbreak, and exhilaration. It’s a story that has somehow hit upon most cliches of athletic cinema: the team called in several talents in an effort to compete (Howard, Whitcomb, and Betnijah Laney). A secret weapon has been hiding in plain sight (Bec Allen). Lively young characters (Michaela Onyenwere, Jazmine Jones, and DiDi Richards) provide feel-good moments through their charisma and comic relief, and there’s even a supposed “chosen one” hailing from Oregon (Sabrina Ionescu). To cap it all off, they won a climactic final game of the regular season against a former compatriot on Friday night, as they doomed Tina Charles and the Washington Mystics to a 91-80 defeat at the aforementioned haven of Barclays Center.

Now, they head into a postseason matchup with the rival Phoenix Mercury, as a duel in the desert has been staged for late Thursday night (10 p.m. ET, ESPN2). Little more needs to be written about the social media wars waged on social media after the first meeting in June, an 85-83 Liberty triumph. Historic bragging rights between two of the remaining three original WNBA franchises that have remained in their original margers are also on the line: the teams have split of a pair of prior postseason meetings, with the Liberty advancing to the original WNBA Finals with a one-game win over Phoenix in 1997. The Mercury returned the favor in 2016 in the same slot the Liberty occupy now: the eight seed. A 30-point effort from Diana Taurasi allowed Phoenix to swipe a 101-94 victory over the third-ranked Liberty.

“(The rivalry) just makes the game more exciting, It gets the fans involved, because the media involved a lot more,” Jones, at the center of June’s virtual battlefields, said leading into the game this week. “Our game is going to be heavily, heavily watched because of all the extra stuff, the extracurricular stuff. It’s making it that more exciting for the fans.”

The win over Washington was everything the Liberty hoped to be and then some: Howard and Laney had double-doubles and the team set a new WNBA record for most three-point makes in a single season. A crowd honored via Fan Appreciation Night festivities roared, a volume aided by the return of pre-pandemic revelries, such as the senior dance team, the Timeless Torches, performing on the court and t-shirts hurled from the hardwood.

Yet, Hopkins brought a slightly bittersweet aura to the proceedings. The Liberty’s reward for their inspiring victory was a weekend of tension: an eight-game losing streak, half of those losses coming by 10 points or fewer, forced New York to rely on the kindness of strangers to clinch its first playoff berth since 2017. Hopkins hoped that the euphoric feelings of Friday would become the first of many sweet September victories. But he hoped the sequels would be penned with the team in control of its own destiny.

The head coach’s postgame comments referenced opportunities to expand their lead above the lottery abyss gone by the wayside: a lost season series to Atlanta, a stumble to lowly Indiana, a blown opportunity against Los Angeles in a brief return to bubble-like settings previously seen in the Sunshine State.

“We had a lot of games where we could have, and likely should have, won,” Hopkins recalled. “It’s really important, going into next year, that they remember the frustration of being in this position now, where we don’t control our destiny, because we didn’t take care of business in the times we should have.”

Armed with the divine intervention of the “basketball gods,” as Jones put it, the Liberty became etched in the 2021 playoff bracket thanks to the fall of the Mystics and Sparks. Step one of a convoluted, complicated, but confident process is complete. New York is back in the playoffs with a sense of healthy reckless abandon, one that unofficially restores their place in the national basketball conversation after wander in the Westchester County wilderness, dealt what’s usually a systemic death sentence amongst their WNBA sisters (forced emancipation from an NBA brother).

“We need to go to into (Thursday) with the same mindset that we have had, that we have nothing to lose at this point,” Laney, the Liberty’s leading scorer, told reporters this week. “We just need to go out and leave it all on the floor and just play hard for 40 minutes stay locked in prayer together, pray for one another.”

Liberty reps could’ve talked until they were blue in the face about the progress made during a post-Olympic slate that failed to raise their number in the left-hand side of the win column. It would’ve been foolhardy for even the most stubborn Liberty detractor to deny them such victories.

Richards, drafted for her defensive prowess, became one of the league’s most torrid freshman sharp-shooters. It would’ve been easy for her and Onyenwere to fade into the background with so many new veteran faces in tow. Instead, they’re the newest members of the Associated Press’ All-Rookie team and Onyenwere is destined for Rookie of the Year honors from the league. Whitcomb flourished in her first leadership role and appeared alongside at the mid-summer All-Star Game festivities alongside Laney, a metropolitan basketball legend in Piscataway who also stepped on the leadership soapbox.

That progress, however, meant little to the casual observer, especially in New York. Back in the playoffs, the Liberty and the gameplan set to take them into the future now has an indelible piece of history that cannot be taken away: a letter next to its name in the standings, a nationally televised brouhaha in pursuit of an elusive championship banner.

The team is fully aware that a mere appearance amongst the crazy eight of the WNBA postseason was never meant to be the endgame, the magnum opus of the supposedly roaring 20s. But after years as nomads, a period of chilling instability that often came through no fault of the team, it’d be foolish not to revel in what’s ahead.

As blow after blow rained down from the basketball gods (and goddesses), the bearers of seafoam often simply cracked their knuckles, sipped their Gatorade, and smiled. If team chemistry, building through adversity, and getting up after supposed knockout blows served as the championship criteria, the Liberty might be mainstays on the Canyon of Heroes.

Having bent reality for the first time since the eviction from Madison Square Garden, the New Yorkers are ready to take full advantage.

“It means a lot for us, just as a group, to see where we started and where we’ve come to… we haven’t had a lot of the results that we want it but we have shown a lot of growth in (coming) together playing together, playing for one another,” Laney said. “Right now, we have this extended season and we can just go into it feeling good with everything that’s been going on so far. (Management) has put out a lot, they back us… For us to be able to be here in this moment, playing for the playoffs is really good.”