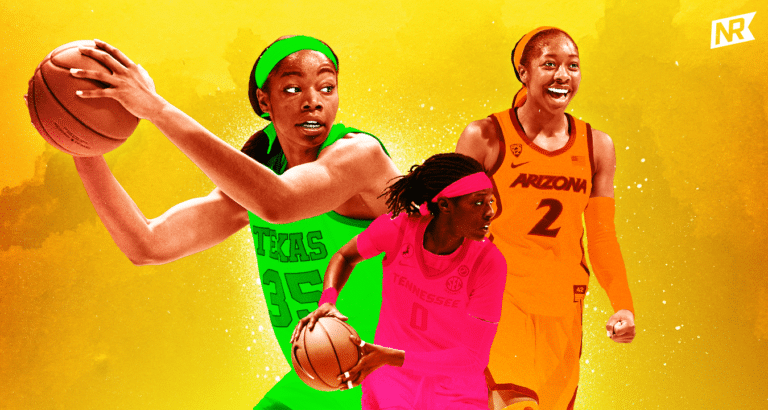 In most WNBA mock drafts, Texas Longhorns center Charli Collier is projected to go No. 1 overall to the New York Liberty.

The Liberty won the top pick through the league’s draft lottery back on December 4. In the 2020 draft, New York selected Oregon’s Sabrina Ionescu with the #1 overall pick which now gives the Liberty back-to-back #1 overall picks. Before 2020, the Liberty have never had a #1 pick, now the team will have it’s second in franchise history.

The NCAA women’s basketball season has been underway for over a month now. In this timeframe, there’s been a slew of cancellations and postponements, with several teams opting out of the season completely (including Duke and the entire Ivy League). The NCAA has also permitted any seniors to opt back in for another season due to the ongoing COVID-19 pandemic.

Will certain top names remain in school for another season? How many draft-eligible juniors will enter early?

Following the New York Liberty’s win of the #1 pick in the draft lottery, the Dallas Wings won the #2 pick despite Atlanta having better odds. The Atlanta Dream will select third and the Indiana Fever will pick fourth. A slew of trades in the draft also gives the Dallas Wings the #5 and #7 picks, while the Chicago Sky will pick at #8. The Indiana Fever have the most amount of total draft picks with six overall, followed by the Wings with 5 total draft picks. Meanwhile, the Washington Mystics have zero picks in the 2021 draft.

Below is my 2021 WNBA mock draft as of early January.

As noted in my list of top prospects for the New York Liberty to select, Collier is the clear choice for the #1 overall pick in this year’s draft. Collier would need to enter early, but in a draft weak on post players and the Liberty with a large vacancy inside, Collier can lock herself into the #1 pick for this year’s draft. In returning to Texas for her senior season, a deeper draft would await Collier in 2022, and the likelihood of not being a lottery pick then could be enough to push her into entering early for 2021.

A young international prospect that could solve the Wings’ issues inside that they’ve faced since Liz Cambage left via a trade to go to Las Vegas in 2019. Kuier would turn 20 years old in 2021 and has an incredibly high ceiling, both offensively and defensively. Kuier, even at 6’5″, can slide out to the power forward position and play alongside Isabelle Harrison or Astou Ndour. Her high-arcing jump shot, similar to Kevin Durant’s, as well as solid footwork inside, makes her a worthwhile project for new Wings’ head coach Vickie Johnson. Having a big line-up for Dallas could be scary if Satou Sabally or Bella Alarie get moved over to the small forward position. The Wings have several holes to fill in this draft, but in a draft short on solid post players, Kuier is too tempting to pass on.

Though the Dream have a lack of an inside post threat, if Collier & Kuier are the top two picks, Atlanta should look at the best available player here. The Dream will likely be forced to let go of Renee Montgomery during free agency and 2020 Most Improved Player of the Year Betnijah Laney could command top dollar as an unrestricted free agent. Adding Guirantes would greatly deepen their bench. A versatile player capable of playing multiple positions, her outside shot paired with her post abilities would make her a solid addition to the Dream’s roster in 2021. Guirantes also recorded a triple-double recently for Rutgers, bringing in 17 points, 11 assists & 10 rebounds on December 23.

Davis’ senior season hasn’t stood-out like her previous season. Heading into this season, Davis was targeted as a potential #1 overall pick. But Davis’ numbers have been down from her previous season. This includes just 21.9% from three-point range and a career-low of just 11.2 points per game. However, Davis’ upside has been on display during her time with the Lady Vols and there’s no denying her potential. Fever GM Tamika Catchings, a former Lady Vol herself, might just sway towards drafting a fellow Tennessee alum. With the Fever’s frontcourt of McCowan and Lauren Cox solidified for years to come, adding Davis to their rotation will give the Fever some depth in the backcourt, which has been lacking the past few seasons.

Dallas’ goal for their 2021 season should enable Arike Ogunbowale to strickly play the two-guard position. Having Moriah Jefferson injured for much of the past two seasons has forced Ogunbowale to run the point. The Wings already have Tyasha Harris from last year’s draft but adding a sharpshooter such as Evans will provide the Wings with two solid ball handlers. Evans is currently shooting at 46.5% from the field and 32.3% from deep and a backcourt tandem of Evans and Ogunbowale will be a force to handle defensively. Even if Dallas sees Jefferson as having a future with the franchise, Evans could be the best available player here, and provide the Wings with a very deep backcourt.

The Mercury have a few uncertainties this off-season: the playing status of Brittney Griner, the health of Diana Taurasi, and their bench stability. Taking McDonald here, a local standout at Arizona, could give them a legit point guard for years to come. McDonald wouldn’t be required to start either. Odds are if Taurasi returns, the Mercury go with Diggins-Smith, Hartley, and Taurasi as their starters. But bringing in McDonald would enable Diggins-Smith to play at the 2 guard position and allow McDonald to handle the point guard responsibilities. A strong defensive guard with a legit outside shot, McDonald would need to improve on her turnovers at the next level. A Taurasi-led Mercury should help her achieve that in the WNBA.

A potential early entry for the 2021 draft. Though not eligible to enter based on age, reports are that Sabally is on pace to graduate by the end of 2021, a qualification to enter the draft early. The Wings already have a crowded roster plus two earlier picks and another legit post player from Germany that they’re waiting to come over (Luisa Geiselsoder). It’s questionable whether the Wings retain all of their first-round picks, but if Nyara opts to enter, she’s likely a hard pass for the Wings. Similar to what her sister and current Wings’ member Satou Sabally provides, Nyara could play either forward position. The main difference between the two is Nyara lacks an outside shot. However, she can provide the Wings with much-needed help inside on the rebounding effort as well as defensively.

The third early entry for this draft, Westbrook has slowly been becoming a standout at UCONN. Westbrook has emerged as a leader with the Huskies through just six games currently as a legit defender and a solid three-point threat. All this despite not having played for nearly two seasons after transferring from Tennessee which was followed by two knee surgeries. With Westbrook’s ability to play multiple positions, similar to UCONN alumni and current Sky player Gabby Williams, she should be able to work into the Sky’s rotation easily. Though the Sky could also use a post player here, I see them taking the better overall player instead.

The Lynx biggest weakness coming into the 2021 draft is their need inside. The Lynx re-signed Brazilian forward Damiris Dantas to a multi-year contract recently and Sylvia Fowles is still under contract. But depth in their post rotation was something that was lacking for the Lynx in 2020 with Jessica Shepard still dealing with an ongoing injury. Mack can be a force inside even though her numbers are down from the previous season. Though lacking an outside shot, Mack’s strength is in rebounding and controlling the game from inside the paint, a much-needed addition for Minnesota for 2021.

An incredibly athletic player with tremendous upside. With the Sparks under a salary cap crunch this offseason, especially in the backcourt, selecting the best available player here is clear. Onyenwere provides a strong defensive ability along with the capability to score from multiple areas on the court. Though not much of an outside shooter, Onyenwere may be more suited as a guard in the WNBA after having been an undersized forward while at UCLA. With the likelihood of several veterans on the Sparks’ roster not being able to get re-signed (Sykes, Williams, Ruffin-Pratt, Augustus), Onyenwere could be given significant minutes immediately off the bench.

Heal is coming off a stand-out season in Australia’s WNBL. At just 19 years old, Heal played in her fourth season in the league and her first with the Townsville Fire. Leading her team into the WNBL finals, Heal averaged 16.7 points per game while dishing out 3.4 assists and adding in 1.4 steals a game. With the Storm under a salary cap crunch there, one of their key players might have to be forced to sign elsewhere (Sami Whitcomb most likely). This should free up a spot in their backcourt as well as add depth at point guard for the Storm. Drafting Heal will be a valuable asset to the Storm to repeat as champions and give the Storm a long-term point guard combination with Jordin Canada for whenever Sue Bird eventually retires.

Another early entry for the 2021 draft. Austin was granted immediate eligibility after transferring from Maryland and has seen her numbers continue to climb this season. Though Bill Laimbeer may look at taking a shooter here, the Aces had a shortage of posts last season (for various reasons), and taking Austin will greatly up their depth chart inside. There’s always the uncertainty if Liz Cambage will show up (who’s also an unrestricted free agent), as well as Korea’s Ji-Su Park, plus whether Dearica Hamby will be ready come the start of the season after injuring her knee last September. Austin fits well in Laimbeer’s system by having the ability to create her own shot inside, can post up with ease, and be a defensive stopper as well.