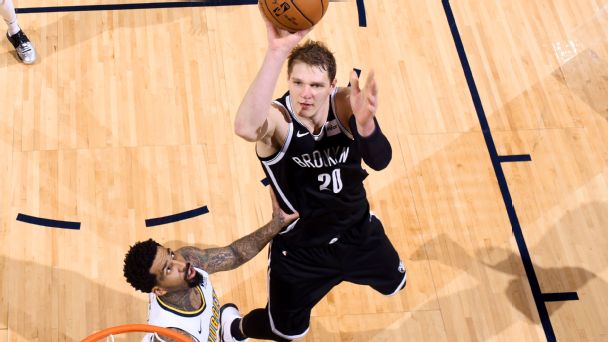 Timofey Mozgov’s Role With Brooklyn Nets Will Only Keep Shrinking

When the Brooklyn Nets traded for D’Angelo Russell back in June, they agreed to take on Timofey Mozgov and his egregious four-year, $64 million deal. It was not the worst deal in the world (that honor resides in New York, just a different borough), but Mozgov is not worth close to what the Lakers gave him. Kudos to him, however, for finagling it.

Over his eight-year career, Mozgov has shown time and time again he does two things exceptionally well. He rebounds well and is an efficient scorer around the basket. In recent seasons, he has experimented with a mid-range jumper that he is confident in. Outside of that, though, he does not have much offensive upside.

What Mozgov Does Provide

At 7-foot-1, 275 pounds, Mozgov is a space eater on the defensive end and makes it hard for opponents to score over him because of his size. That is still true this year.

According to Synergy, shots inside of six feet that are defended by Mozgov fall just 46.5 percent of the time, 13.8 points below the league average. It is cumbersome for smaller guys to climb Mount Mozzy. He is not the most spectacular athlete but understands verticality. As he gets further from the basket, though, that lack of explosiveness comes back to bite him. He cannot stay in front of other players when they get the step. With how the NBA is constructed, allocating minutes to a big who is not versatile on the defense is not something a coach would consider.

The Rise of Tyler Zeller

In 16 games, Mozgov is averaging 15.1 minutes, his fewest since 2013. As of late, Kenny Atkinson has hit his Russian center with seven DNPs, and it is because Brooklyn just cannot afford to have him on the floor at this point. The Nets are not much better defensively when he is out there, and their offense comes to a screeching halt. Per NBA.com, Mozgov’s net rating is a team-low minus-15.7.

Tyler Zeller has received most of Mozgov’s minutes since his role has gotten reduced, and that has been better for the team. Mozgov just never developed chemistry with the main rotation guys. There is no point playing him if he is not making an impact. The Nets, who are still in experimentation mode, have tried different lineups. However, being better compared to last year means Atkinson can coach and be more focused on winning instead of which combination works best. That is still a concern, but the pool of players to pick from is small. In recent weeks, Zeller has stepped up and worked his way into the rotation.

He and Mozgov are not the same player, but they are close enough. Zeller is not as useful defensively, but he is not a liability. On the other end, the offense runs nicely when Zeller’s out there, and he boasts the fifth highest offensive rating on the team (105.6). Brooklyn does not need to run any plays for him, and he is more mobile than Mozgov is. Zeller also rebounds at a similar rate. One thing that is noticeable, however, is opponents do not pay any attention to Mozgov when he is near the perimeter.

Brooklyn got away with Brook Lopez because of all the attention he commanded. In him, the Nets had a talented scorer who knocked down threes at an astonishing rate while consistently demanding double teams on the block. That allowed other guys to get better looks. Mozgov does not space the floor, nor is he a threat in the post. The three ball is such a critical piece of Kenny Atkinson’s system that condensing the court only hurts everyone else. A team cannot cannot have its guards running into a wall of defenders every time.

The sample size is small, but Mozgov has made three of his 15 attempts from downtown; Zeller is 3-of-7. Although he does not attempt many, Zeller has shown more confidence in putting the ball on the deck and attacking the rim when the defender closes out on him too hard. He gets an easy bucket. Mozgov cannot do that.

An Even Greater Diminishing Role

As the year goes on, Mozgov is going to fall further down the depth chart. It is entirely possible he goes 10 or 11 games without seeing any action because he will only be useful in certain situations. If one of the Nets’ opponents has a lumbering big man who is similar to Andre Drummond’s size, Brooklyn can use Mozgov’s body for rebounding and defensive purposes. But, those guys are dying out. He is too slow to stay in front of the smaller, quicker bigs who populate the landscape.

Brooklyn could part ways with him in a year or two after his contract deflates, but the return would not be much. Regardless, as of now, Mozgov is a decent option to have when the situation calls for it. We just have to wait and see when those instances occur.