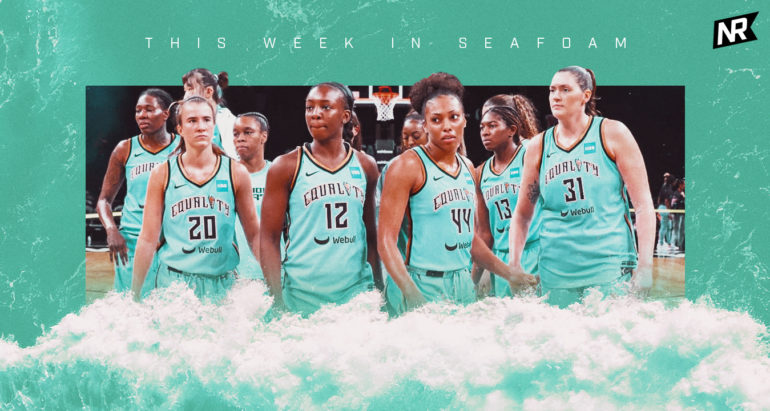 The New York Liberty went 0-1 this week and will be without Jocelyn Willoughby until late June.

The New York Liberty only played one game this week. And like most games that the Liberty have played this season, it ended in a loss. After opening the year with a win over the Sun, maybe a rematch could have gotten the team back on track? Nope. Connecticut beat up on New York to the tune of a 92-65 defeat that we’re not even going to talk about in this week’s column. It happened. It was bad. Let’s look at some bigger storylines with the team instead.

What the Jocelyn Willoughby Injury Means

Jocelyn Willoughby missed all of last season with a torn Achilles, but was healthy and started the first four games of this season for New York. She averaged 19.5 minutes per game, shooting 50 percent from the floor and averaging 6.8 points, 2.8 rebounds, and 1.0 steals per game.

I’ve always thought that Willoughby could be a solid three-and-D player for New York and hated that she missed last season, because she would have been a great piece on last year’s team.

Her first four games this year were encouraging, though. The three-point shooting was a little off as she shot just 33.3 percent in those games, but that’s such a small sample.

Unfortunately, Willoughby suffered another injury. This time it was a quad injury that’s expected to keep her out for six weeks.

The good news for New York is that Willoughby’s absence coincided with Rebecca Allen returning to the team from her overseas commitments. So in terms of the actual minutes distribution, Allen can slide into those. Just days after flying in from Spain, she played 22 minutes off the bench in her first game, shooting 1-for-8 from the floor. The team used a starting lineup of Stef Dolson, Natasha Howard, Sami Whitcomb, Betnijah Laney and Sabrina Ionescu with Willoughby out. We’ll have to see if Sandy Brondello opts to keep Whitcomb’s shooting in the lineup or goes with Allen there, whose game is a little more like Willoughby’s.

New York will also need to rely on Michaela Onyenwere and AD more with Willoughby out. Onyenwere was the Rookie of the Year last season, but her numbers are down this year, as she’s playing 17.8 minutes per game and is shooting 38.1 percent from the floor and has struggled from three, going 27.3 percent from deep. Onyenwere will need to play more like she did in 2021 to make up for Willougby’s absence.

As for AD, they missed 2020 and 2021 with long COVID. Since returning, they’re only playing 6.8 minutes per game and shooting 33.3 percent from the floor. I’m not sure if AD will get back to the encouraging form they had as a rookie in 2019 or if these past two years dealing with COVID have sapped them of their ability to make an impact on the floor. But with Willoughby out, we’ll likely continue to see a little of AD on the floor.

As I wrote this week in my weekly column for FanSided, the Liberty have a turnover problem:

Those turnovers help explain why the Liberty are averaging just 70.6 points per game, the worst mark in the league. The offense has shot the ball better than a few teams — four have a worse true shooting percentage — but that doesn’t really matter when it seems like every play ends with the Liberty giving the ball away.

There’s nothing this team needs more than another reliable ball-handler. Sabrina Ionescu is the only point guard on the roster, and even she had her most efficient season in college as a senior when she was paired with Minyon Moore, who is more of a true point guard.

DiDi Richards was supposed to be that backup PG this season, but she’s been hurt—and she’s also not a true point guard either. She did do an excellent job at Baylor as a senior when she was forced to play the position due to the construction of the team.

The Liberty signed Dangerfield to a hardship this past week.

At some point, either Richards or Willoughby will return and the Liberty will be forced to release Dangerfield. That’s still a few weeks away, as the kind of hardship that she was signed to requires two long-term injuries, which the CBA defines as “three additional weeks from the date of the requested Exception.”

So, Dangerfield gets a three-week audition with the team, at which point she’ll be released and then the team can figure out the next step beyond that.

Dangerfield, the 2020 Rookie of the Year, was a surprise cut before this season, as the Lynx—another team in the same “we need point guards” boat that New York is in—released her along with former Liberty guard Layshia Clarendon.

So, what does Dangerfield bring to New York?

During her rookie campaign, Dangerfield averaged 16.2 points per game on 47.1 percent shooting, with 3.6 assists per game. She turned the ball over more than you’d like, especially when you factor in that the Liberty need to cut down on turnovers, but she’s at least capable of running the second unit. And, well…that’s something this team needs.

Adding some scoring upside and ball-handling to the second unit is huge. New York just has to hope it gets a version of Dangerfield that looks more like 2020 than 2021.

After a slow week last week, the Liberty will have a lot of games on the horizon this week.

On Tuesday, the team faces the Lynx. That should be a fascinating matchup. Minnesota is right there with New York at the bottom of the league, but the Lynx have Sylvia Fowles, who New York will struggle to contain. Maybe this can be a bounceback game for the Liberty, but it’ll take a major effort from this team. Cutting down turnovers. Hitting shots. Finding a way to keep Fowles from just destroying things.

Friday and Sunday are a pair of road games against the Storm. Seattle hasn’t been as good as expected, but the team has won two in a row to get back to .500. They have Breanna Stewart back following a brief COVID absence. Seattle is the more talented team by a wide margin and is 3-1 at home.

This could be another rough week for the Liberty.