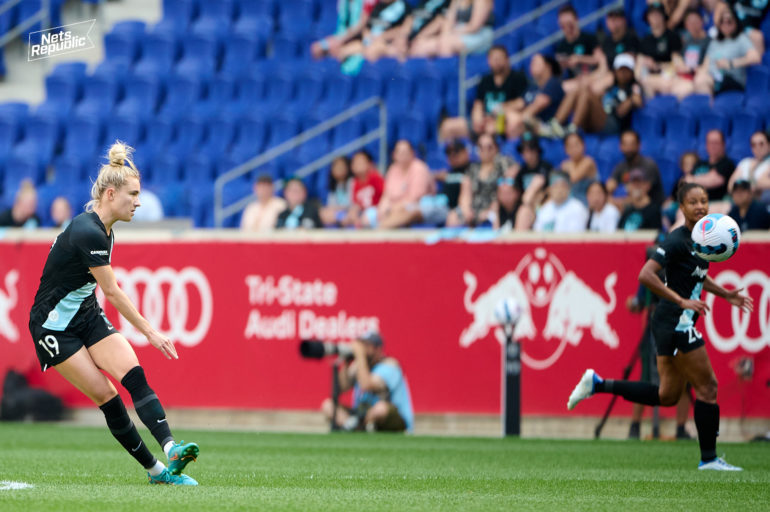 On Sunday, NJ/NY Gotham FC held their home re-opener following last week’s postponement due to a COVID-19 outbreak on the NC Courage. Gotham had a small number of players under COVID protocol last week, which may have led to star forward Margaret Purce starting the game on the bench. Similarly, goalkeeper Ashlyn Harris and defender Ali Krieger who are typical starters for the team were also out of the starting lineup.

Despite the blistering heat, Louisville began the match strong and energized, employing a high press that induced a number of turnovers in Gotham’s half. Louisville’s goal in the 13th minute came after some good team buildup from a goal kick when Jessica McDonald got in behind the Gotham defense and placed a perfect pass in the box to an unmarked Lauren Milliet who slotted a strong central shot just under the crossbar.

The woodwork would prove to be an added nemesis on the night as Gotham would tally an historic five hit posts, tied with Chicago Red Stars-North Carolina Courage match in 2019 for most in posts hit in a single game in NWSL history.

Gotham grew into the game, created a few good scoring opportunities, and could have equalized during first half stoppage time when Kristie Mewis sent a shot high from inside the box. Prior to that, Mewis had hit the post on two occasions, once on a free kick that Louisville goalkeeper Katie Lund pushed off the crossbar and on a shot just outside the box that once again left crossbar rattling.

At the half, coach Scott Parkinson brought on Cam Tucker for Nahomi Kawasumi and Margaret Purce for Paige Monaghan. The home side would control the match for much of the second half but could not find the back of the net hitting three more posts. The best chance came off a Purce incursion into the box that saw her shot smack the post (again).

Asked about the result and Gotham’s turnovers after the match, coach Scott Parkinson said that the team needed to stop overplaying the ball and be more direct.

“When we play forward and with pace and speed, we seem to cause teams more problem,” Parkinson said. “[Racing Louisville] is really good in transition and we were trying to overplay. Which means when we didn’t play it right, it led to chances for them. In the second half, we went a little bit longer. We turned them around a little bit more. We took a little more territory up the field and got further away from our goal. [Hitting the crossbar five times] is unfortunate, but what I told the team as corny as it sounds, is you make your own luck.”

Kristie Mewis attributed Gotham’s inconsistent play to a lack of quick problem solving and taking too long to get into the match. “I think that we’re not problem solving quick enough and that’s our biggest issue,” she said, adding that the loss wasn’t for lack of trying. “Effort isn’t going to win you every singly game and we just need to be able to problem solve and we have to be able to get wins under our belt.”

The team will return home to Red Bull Arena on June 4th to face off against reigning champs Washington Spirit as well as celebrate Pride Night. Tickets are available on Gotham FC’s website.