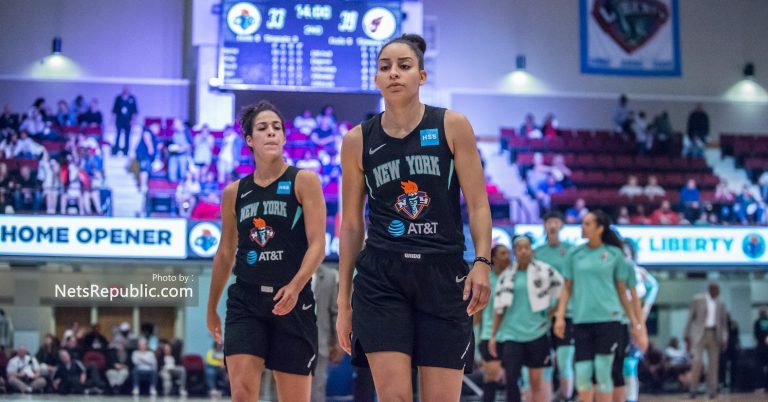 The Liberty Have The #1 Pick. Now What?

The WNBA Draft Lottery happened this past week and the New York Liberty ended up with the first overall pick in the 2020 WNBA Draft. New York entered the lottery with the best odds to get the top pick, but those odds were still under 50% and the team could have picked as low as third.

But general manager Jonathan Kolb — New York’s lottery representative — got lucky. When Indiana fell to third, there was concern that the Dallas Wings would jump the Liberty and get the top pick, but Dallas’ name came up second and New York was officially in the catbird seat.

So, the Liberty have the first pick. They also have a long time between now and April, when they’ll make that selection. One interesting feature of the WNBA’s structure is that the teams all know where they’re picking before the college season starts, which means they can scout players with that draft position in mind.

It also means that writers and analysts can spend all year speculating about things with a clear idea of what they’re speculating about. Here at Nets Republic, that means we have months now to think about what New York will do with the first pick and to watch certain prospects who seem to be trending toward being that first overall pick.

This is all a long way of saying this: Let’s talk about Oregon point guard Sabrina Ionescu, who appears to be the runaway favorite to be New York’s number-one selection.

What Does The Current Point Guard Situation Look Like?

If we’re basing things on some combination of past production and potential future production, the Liberty should enter the 2020 season with Tina Charles, Asia Durr, Kia Nurse, and Amanda Zahui B locked in as starters (barring trade or international commitments since 2020 is an Olympic year). The biggest question mark right now is at the point guard position.

Tanisha Wright was the team’s starting point guard down the stretch, but reports indicate that Wright is retiring from the WNBA. That leaves the options on the current roster who could play point guard as Brittany Boyd and Bria Hartley (assuming that Durr and Marine Johannès will be playing shooting guard, though there is a pretty big contingent of Liberty fans who’d like to see Johannès play point, something that sounds great in theory based on how exciting Johannès is a passer but also seems unlikely because of the aforementioned Olympics issue, which will likely keep Johannès away from the team for most of the year).

Boyd opened 2019 as the team’s starting point guard, but she was eventually benched for Wright and briefly fell out of the team’s rotation. Boyd’s a solid passer and plays hard on both ends, but she’s not much of a scoring threat, which limits her upside.

Boyd is reportedly signed for 2020, but we’ll see what that means this offseason. Maybe she’ll be back in a reserve role. Maybe the team trades her. Whatever the situation, it’s clear that Katie Smith doesn’t intend to go into another season with Boyd as the team’s starting point.

The other option is Hartley. Aside from her also having Olympics concerns, the Liberty played Hartley at the two a lot of the time in 2019. She can be a ball-handler, but per Synergy, Hartley scored in the 72nd percentile in spot up situations and the 33rd percentile as a pick-and-roll ball handler. Using her in an off-ball role — maybe as the team’s primary sixth woman — is a more effective way of using Hartley.

This all leaves the Liberty with, uhh…a pretty sizeable hole at the point.

Now, look: there is no guarantee that Ionescu is going to be wearing a New York uniform next year, but at this moment it’s the most likely scenario. Maybe Ionescu underperforms and the team chooses Baylor big Lauren Cox. Maybe Chennedy Carter has a huge year and comes out early and winds up surpassing Ionescu.

For now, though, let’s assume it’s Ionescu as the pick.

The Oregon start would instantly be the best ball-handler on this roster, and she’s also a very good scorer as well.

Ionescu was in the 94th percentile in scoring in the half-court. Her possessions when you factor in assists saw that half-court number jump to the 98th percentile. She’s effective as a pick-and-roll player and also a lethal spot up shooter, which would allow the Liberty to give her plays off the ball with someone like Hartley or Nurse operating as the main ball-handler. That versatility would give this team a significant number of options offensively when it comes to how they approach things.

Ionescu also just, like…doesn’t turn the ball over very much. For a high volume player who seems to always have the ball in her hands, she does an excellent job not handing that ball over to the other team.

She’s also got a chance to become the second women’s player to with 2000 points and 1000 assists this year, and the first to also have 1000 rebounds. Her production over the last few games puts her on track to do that. She’s got a unique mix of those three skills that no one in the WNBA has. She won’t be a nightly triple-double threat like she is in college just because compiling stats is so hard to do, but she will help this New York team in so many ways. I’m already imagining how great watching Ionescu/Tina Charles pick-and-rolls will be.

Obviously, things could change. But for now, the thought of Sabrina Ionescu opening next season as the starting point guard for the New York Liberty makes a lot of sense and should be an exciting idea for every Liberty fan.