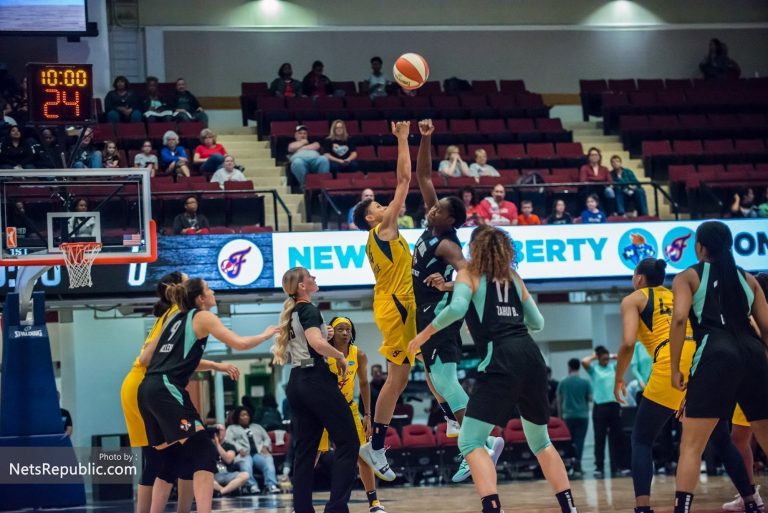 We’re a little more than halfway done with this WNBA season and the New York Liberty sit at 8-11 with 15 games left to play. They’ve already won one more game than they did in all of 2018, and there’s plenty of reason for Liberty fans to have hope that things are trending in a positive direction.

But that doesn’t mean things are suddenly fixed overnight or that New York won’t benefit greatly from likely having one of the two best chances to win the draft lottery. While Kia Nurse has made a leap this year, other players haven’t, and star forward Tina Charles has struggled to score efficiently.

With the All-Star break and a chance to slow down and breathe here, let’s take a look at how every member of this Liberty team has performed this year.

Allen lost a month of this season to a hand injury. She started the year as the team’s starting small forward, but her play and injury led to her losing that role.

Now, Allen’s basically been pigeonholed into the role of a spot-up shooter off the bench. 44.2% of her field goal attempts this year have come from three-point range.

Boyd just recently lost her starting point guard role to veteran Tanisha Wright, which seems to be a sign that Boyd’s unlikely to be a key part of the future of this team. While New York is still technically alive in the playoff picture and I’m sure head coach Katie Smith believes Wright gives them the best chance to win games, you’d think she wouldn’t have made that move if she thought Boyd could still be the long term point guard for this team.

Boyd is seventh in the league in assists per game, but she just hasn’t done enough else to demand the starting role. She’s shooting under 40% from the field and under 30 percent from three. She’s the only player in the top-11 in assists per game with a negative plus/minus, and she’s got a -1.29 PIPM. Boyd hasn’t been terrible or anything and she still deserves to get minutes on a WNBA team, but 2019 appears to have proven that when the WNBA Draft gets here, New York should be looking for someone who can be a primary ball-handler.

Charles made the All-Star team this season because she’s fourth in the league in scoring and eighth in rebounding, but…it has not been a vintage Tina Charles season.

Charles currently has the ninth-lowest PIPM in the WNBA. PIPM is a metric that looks at player production and quantifies a player’s impact offensively and defensively. The goal of PIPM is to not just quantify performance, but to also serve as a predictive stat that can tell us something about a player. What it’s telling us about Tina Charles is…not good.

If you don’t believe in advanced metrics, we can measure Charles’ year in a relatively easy way, which is to point out that her field goal percentage this year is 11.4% lower than it was last year. She’s never shot below 40% for a season, but right now she sits at 35.9%. She has a 42.4 true shooting percentage and a 31.1 usage rate.

Something’s wrong with Charles this year. Maybe it’s exhaustion from the year-round schedule that women’s basketball players are subjected to. Maybe she’s reached the end of her prime. Maybe she’s just in some prolonged shooting slump. Whatever the reason, it’s reached “yeah, I’m worried” levels.

I’ve admittedly been high on Asia Durr being a part of New York’s future since before she was drafted by the Liberty, so the first half of her rookie season has definitely not been my favorite thing to watch.

Durr’s shown some definite promise at times this season, but a groin injury kept her out lately and appears to have been a major factor in her barely playing in the last game before the All-Star break.

Durr is struggling from deep, hitting just 31.1% of her threes. She’s done a good job with her shot selection, with only 14.1% of her points coming from the midrange, and I’m still encouraged by Durr’s play. She hasn’t lit the world on fire, but she’s played solid basketball.

Plays like this showcase her ability to drive the floor and suggest that she should take on more of the team’s ball-handling duties when she’s on the floor:

The biggest question I have in the second half is if Durr earns her way back into the starting five and whose spot she’ll take. I’d guess Bria Hartley‘s spot, allowing Wright to keep running point.

I initially assumed Gray would be a preseason roster cut, but she impressed the coaching staff enough to make the final roster, and then she continued to impress enough to stick in the rotation.

Gray’s big thing this year has been rebounding. Among players averaging at least 10 minutes per game, Gray is second to Indiana Fever center Teaira McCowan in offensive rebounding rate. Her ability to generate offense from putbacks has been a big help.

Hartley spent most of the season in Europe so far, but she has appeared in nine games. Like in 2018, Hartley’s shooting poorly on a decent number of three-point attempts per game, converting just over 30% of her 2.6 attempts per game. Other than that, Hartley missed too much of the year for me to have too many thoughts on her year, though I wonder if she’ll remain in the starting five going forward.

I wrote a piece a couple of weeks ago about Johannès. Since then, she’s had a game where she was 6-for-6 from the field and scored 17 points, and then another where she scored just two points. Johannès isn’t going to be consistent on a nightly basis yet as she’s still getting used to playing at the WNBA level, but she’s a key part of New York’s future and needs to play 20+ minutes per night.

Nurse has been the biggest surprise of the season.

After a rookie campaign in which she often flashed promise but also went through some cold spells, Nurse earned her first All-Star berth and competed in the Three-Point Contest. She didn’t make the final round of the contest, but Nurse was a starter in the All-Star Game. She scored 15 points on 6-for-12 shooting.

Nurse earned that All-Star starting spot by improving across the board this year. She’s averaging 15.4 points per game on 40.7% shooting and is shooting 35.5% from deep. Nurse is also adding 2.5 rebounds and 2.1 assists per game.

Despite Tina Charles’ numbers, Nurse has been New York’s best player this season. She’s 14th in the WNBA in O-PIPM, though her defense has been a problem at times as evidenced by her -1.98 D-PIPM, which ranks as the second-worst in the league. There’s a big disparity there, but Nurse has turned a corner offensively.

Raincock-Ekunwe has appeared in 13 games, playing 11.6 minutes per contest and averaging 3.2 points and 2.7 rebounds. She’s been a very good depth piece and has given the Liberty solid minutes. It’s also worth noting she’s been the last big in the rotation while rookie Han Xu has mostly stayed on the bench, and she’s still been in the rotation even with New York getting their EuroBasket players back. It’s been good to see her get chances.

New York traded a second rounder for Wright before the season. I think the expectation was that Wright would provide a veteran presence off the bench who could step in and run bench units and provide some solid shooting and…well, that’s what she did for awhile, until she was doing that a little too well to stay on the bench. Wright’s the starting point guard now and I’d be surprised if Brittany Boyd is able to earn that role back. Wright’s brought some needed stability to the floor.

A second round pick in this year’s WNBA Draft, Han has been the last player off the bench for the Liberty most of the time this season and while she’s had some exciting moments, she’s unlikely to play a role in the second half of the year. Because this article is focused on this season, I don’t have a ton to say right now about Han Xu, but expect some long form thoughts on her after the season ends.

Thanks to the alphabet for saving the player I’ve been most excited for since the beginning of the season for last.

Zahui B — or, as I like to call her, Zahui 3 — has developed two key things this season. She’s continued to expand her game outward offensively. After taking 2.1 threes per game last year, Zahui B has upped that to 3.4 attempts this year. She’s hitting 36.4% of those attempts, up from 34.4.% last year.

Zahui B has also become a bit of a shot blocker. Her career-high in terms of blocks per game was 0.7, but she’s blocking two shots per game this year.

She’s also got the highest true shooting percentage of the team’s regular, non-Johannès players. Her individual success hasn’t translated to team success when she’s on the floor, as she has the team’s worst net rating, but there’s been definitive improvement from Zahui B this year.

What To Expect In The Second Half

What will we see from New York in the second half of the season?

Probably a lot of the same inconsistency that plagued them in the first half. With Charles struggling and a lot of the key pieces on this team being young, this team isn’t built to go out and contend for a win every night. The roster just isn’t in a spot for that to be a reality.

Hopefully, we see some closer games and Katie Smith will continue to work different lineups out and try to figure out which ones work best. More Johannès. More of a consistent role for Durr. Maybe some Han Xu once the Liberty are officially eliminated from the playoffs.

Playing hard, basically. That’s what I want to see. And more minutes for the players who are part of the team’s future.