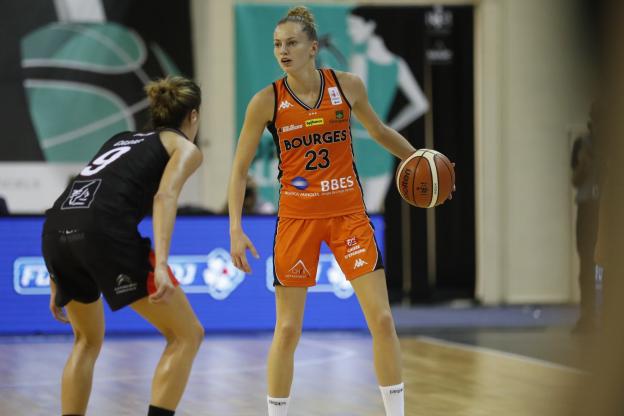 On Friday night, the New York Liberty fell to the the Chicago Sky 99-83. With the Liberty’s EuroBasket players back, the team started a lineup of Amanda Zahui B, Tina Charles, Kia Nurse, Bria Hartley, and Brittany Boyd. Asia Durr, who’d been in the starting five, didn’t play in the game because of a groin injury. The Liberty just never really looked like a team that was fully together in this one.

In lieu of recapping the game, I want to focus on the one big positive for New York, which was the play of the heralded French guard Marine Johannès in her WNBA debut. Johannès finished with 10 points and three assists, going 2-for-4 from three and 4-for-7 from the floor. She was a plus-12 in the game.

I’ve been waiting to see Johannès in a WNBA uniform for awhile now. Let’s talk about her game and about what to expect from her this season.

If you Google Marine Johannès, the first thing you’ll see is a video from FIBA called “Marine Johannès | Ridiculous Plays | Full Season Mixtape.” Any time the world’s largest basketball organization posts a video about you that includes the phrase “ridiculous plays,” something good is going on.

Johannès is 24 years old and has been playing internationally and for the French national team, where she’s developed into a favorite among people who watch international highlights. Johannès is a gifted scorer and passer, and that’s helped create all kinds of exciting plays.

Johannès is capable of getting her shot up in an instant, of just going from moving to stepping back and firing up a three just like that. Her footwork is a big part of this, as she’s able to stop on a dime and smoothly step back.

Like, look at how she uses her long stride here to create space to get this three off!

On the play above, you’re likely to get lost in amazement at the circus layup that seems to shoot up like a rocket and then fall right into the basket, but Johannès’ ability to get to the basket is what impresses me. There’s this slight moment of hesitation as she gets to the three-point line, which causes the defender to get off-balance here. That allows Johannès to dribble right and get into the paint, where she then showcases her touch with this wild little reverse layup.

But passing is where Johannès is basically a wizard. Look at the clip above. I’ve replayed it an untold amount of times and I still can’t figure out how this pass happens. Johannès commits completely to the drive and the defenders collapse on her, at which point a basketball suddenly comes careening out to an open shooter behind the arc. I…don’t know how that ball got there.

Anyway, here’s the full highlight video for you to peruse, because I’m spending way too much time on these highlights and not enough on Friday’s game.

Let’s talk about Marine Johannès and her 16 minutes on Friday night.

Johannès’ game on Friday was basically a scaled-down version of what she’s shown on the international stage.

First, there’s her passing. No, we didn’t see any magical, wtf-style passes go down, but she did make some good plays to set up her teammates — her teammates who she’s barely played with, it should be noted, as Johannès wasn’t with the team in training camp. Some good passes into the paint, including a skip pass.

Johannès also showed off that same high-arching three-point shot. There’s one play that looks almost just like the first clip from the previous section of this, with Johannès launching one of those “whoa, that ball left her hands fast” threes. Her release is so quick on those, and that ability to get a shot up like that can help negate a lot of advantages that perimeter defenses would have against players who take longer to get the ball up.

And Johannès showed that she could run the floor and get to the basket. New York got a steal from Tanisha Wright, who started the break with Johannès on the other side. Johannès did a great job adjusting on the run to a high pass from Wright and then ends the play with a layup.

Johannès is such a quick player offensively, and on Friday she showed how that quickness does translate to the WNBA level.

So, what’s next for Johannès and the Liberty?

The guard/ small forward rotation is really tough to figure out. If we assume a healthy Asia Durr is in it, the team will have 120 minutes to divide between Johannès, Durr, Brittany Boyd, Kia Nurse, Tanisha Wright, and Bria Hartley. Nurse is a lock for 30+ minutes per night, which leaves the situation for the other five players murky.

Johannès is almost definitely last among those players in priority right now, though her showing on Friday suggests she shouldn’t be last. Brittany Boyd is the starting point guard because she’s been the team’s best passer, but Johannès is arguably a better passer, so we could see her get minutes at the point? Or if the Liberty keep struggling to win games, we could see the veteran Wright lose minutes?

I don’t know. It’s a tough situation. Sunday’s game against Seattle will tell us more if Durr (who is listed as questionable) plays. Johannès should see at least 15 minutes per game, though, because she’s one of the highest upside players on this team. I think she has the talent to crack the starting unit, but I’m probably getting ahead of myself.

For now, Marine Johannès will see some minutes each game, and it’ll be fun to see how she continues to impress in those minutes and adapt to the competition level in the WNBA. Chicago’s far from the league’s best defensive team; will Johannès be able to look this strong against Seattle? We’ll see.