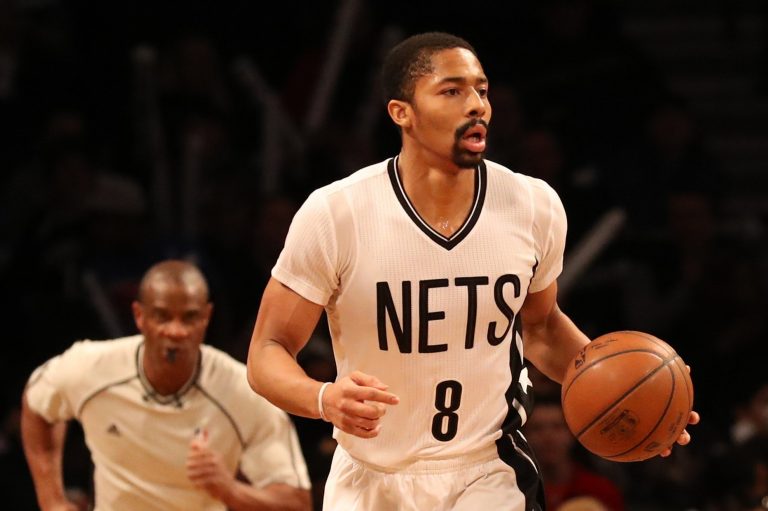 Three years ago, Spencer Dinwiddie was struggling for a spot in the Detroit Pistons rotation. Now, he is one of the Brooklyn Nets’ most integral players. In 12 games, the 24-year-old is averaging 9.9 points and 5.4 assists, both of which are career-highs. Also, he is shooting 41.3 percent from three and is making the case as the NBA’s best backup point guard.

The Nets are 5-9 overall; 2-4 in November. Dinwiddie missed Brooklyn’s most recent game against the Utah Jazz because of a hamstring injury, but fortunately, he returned the very next game. The Nets have profoundly missed Dinwiddie when he is not on the floor. Their first game of the month was against the Los Angeles Lakers, who handed Brooklyn a 124-112 loss. It was not a pretty game; D’Angelo Russell struggled from the field, as did everyone else not named Allen Crabbe or Rondae Hollis-Jefferson. The crushing blow, however, was Dinwiddie playing just 15 minutes because of foul trouble.

Two things make Dinwiddie a crucial piece of Brooklyn’s success: his decision-making and the ability to stretch the floor. If a team is in the market for a backup point guard, those are the qualities it would want. Dinwiddie instills confidence in Kenny Atkinson because he can go out there and is not worried about making the home run play. He just does his job.

With a usage rate of 19.6 percent, Dinwiddie does not disrupt the rhythm of any of his teammates. He assists on 33 percent of their field goals, and Basketball Reference estimates his turnover rate is 10.5 percent, meaning Dinwiddie averages roughly 11 giveaways per 100 plays. Nine other guys in the NBA have lower usage rates with an assist rate of 30 percent or higher. Only Chris Paul and Deyonta Davis have a turnover percentage under 11. Here are the caveats — Paul’s played just 33 minutes this season, and Davis is at eight.

Brooklyn’s current roster situation lacks a traditional point guard, someone who is actively seeking out their teammates. Jeremy Lin was going to serve that role before the injury hit, and D’Angelo Russell got brought in to act as a dynamic scorer, something Brooklyn needed desperately. Dinwiddie has stepped up big time, and the Nets’ offense is much more lethal when he is on the floor. According to Basketball Reference, Brooklyn’s offensive rating with Dinwiddie on the court is 110.7, and their effective field goal clip sits at 52.7 percent. When he sits, those metrics fall to 100.4 and 47.1, respectively.

He, of course, contributes to this by being a deadeye shooter, but also by manipulating the defense on pick-and-rolls. Dinwiddie produces 1.02 points per possession as the pick-and-roll ball handler, a mark that is third on the team behind DeMarre Carroll and Lin. His size and ball skills allow him to see over the defense and deliver pinpoint passes, whether they are to the big man or across the court to the open shooter. On top of that, defenses have to respect his shooting, and that forces them to go over the screen. Dinwiddie’s touch has been non-existent from inside the arc, which favors the defense. He is shooting just 34.3 percent on twos this season. That changes as the PnR ball handler. Synergy has him shooting 44.2 percent on that playtype.

Dinwiddie’s impact also goes beyond the statistics. He is a bit older (but not too old), so he has a firm grasp on how the game is supposed to be played. Spending three years at Colorado helped tremendously, and, since the Nets’ core is young, they need someone who can direct traffic and put them where they need to be.

What gets lost often is how disruptive Dinwiddie can be on defense. With his size and length, he can harass opposing ball-handlers and close off passing lanes with quickness. I do, however, see why no one notices. Brooklyn has an atrocious team defense. It is hard to pinpoint who is playing well when the rest of the team is a dumpster fire.

Among the Nets who are averaging at least 10 minutes a night, Dinwiddie has the fourth-lowest defensive rating at 105.1, according to NBA.com. Brooklyn’s defensive rating is also 105.1 when Dinwiddie’s on the court, 2.8 points better than when he sits.

Spencer Dinwiddie’s play on both sides of the ball has been valuable as much as it has been entertaining. After a few years, he has carved out the perfect role for himself, evolving into a fearless floor general whose unselfish play extracts the most out of those closest to him. Kenny Atkinson can start him or bring him off the bench without a dropoff in production, and Dinwiddie is young enough to be a piece of the Brooklyn Nets’ plans going forward.