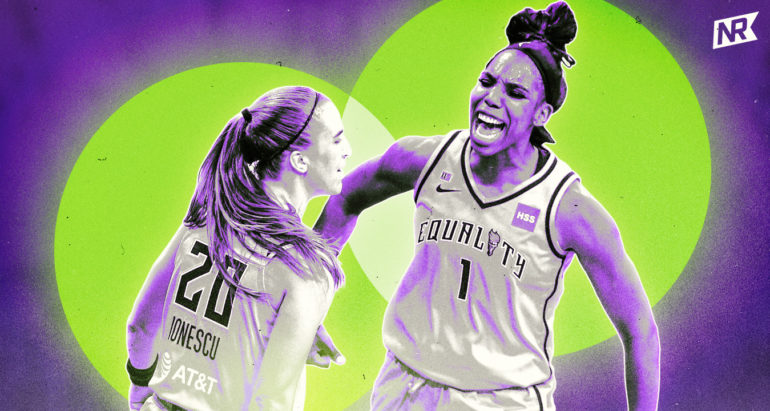 The unlikely pairing of Reshanda Gray and Sabrina Ionescu has opened new avenues of offense for the New York Liberty.

The WNBA journeys of New York Liberty teammates Sabrina Ionescu and Reshanda Gray couldn’t be more different. One has had every waking move of her professional career relentlessly scrutinized in anticipation of a women’s basketball reckoning. The other has battled for every minute of her career, rarely blessed with workplace stability, and serves as a living, breathing argument in favor of league expansion through either additional franchises or increased roster spots.

The powers that be in modern New York basketball have made one thing clear: if one establishes herself as an essential member of the team’s rise from the hardwood underworld, it doesn’t matter where she came from. That philosophy is clear in their roster makeup, which features high-profile, accoladed additions from elsewhere (Betnijah Laney, Sami Whitcomb, Natasha Howard), late draft diamonds in the rough (Jazmine Jones, Kylee Shook, Leaonna Odom), and, of course, the touted hype and promise of Ionescu, who was joined by another first-round choice well on her way to freshman hardware (Michaela Onyenwere).

With several possible pieces of the completed metropolitan puzzle still missing (Asia Durr, Marine Johannès, Jocelyn Willoughby, and Han Xu), Gray’s game of personal musical chairs may resume again once the final second ticks away from the Liberty’s season. For the time being, however, Gray has gained well-deserved stability through a contract—her third dipped in seafoam in this season—that will keep her in Brooklyn for as long as the Liberty’s season lasts.

“Gray Gray’s awesome. She’s such a great person, great spirit to have around,” Jones said of Gray’s re-return. “On the court, she brings that toughness, grit, will to win… she’ll dive for a loose ball, get her hands on a rebound… Gray Gray definitely belongs in this league.”

After Gray’s second term ended when the Vegas-bound Kiah Stokes returned from an international tour, Ionescu left her a message: stay ready.

“Before she left, I told her to stay ready so you don’t have to get ready and that’s exactly what she did,” Ionescu said. “She has come in here ready to play, ready to contribute to us as a team and she’s putting up great numbers and great minutes and really helping us.”

Gray has mostly made her presence felt as a gritty, physical defensive force who is unafraid to draw contact. In addition to the surprisingly prevalent interior efforts of Sami Whitcomb (more than doubling her career-best at 5.8 rebounds per game), Gray has helped the Liberty keep pace in the top-heavy, crowded standings of the WNBA while multi-threats Natasha Howard and Rebecca Allen heal from injuries.

In this latest term—her fifth in New York and third alone this season—Gray is a bit of an outlier. She’s a relic amongst relative rookies, armed with several years of experience. To put it in numerical context: with the Olympic break underway, Gray has played in 112 WNBA contests (including three playoff appearances): eight more than Ionescu, Onyenwere, Shook, and DiDi Richards combined. Her experience and expertise have been well-cherished by her teammates. The sophomore Shook, for example, claimed that Gray was “definitely making me better” when the veteran was on her second hardship deal back in June.

Gray’s leap to the NBA began with a four-year stay on the California Golden Bears’ basketball program. During her tenures in New York, she has been able to work with fellow former Berkeley residents Brittany Boyd, Layshia Clarendon, and Charmin Smith. That Cal contingent has fully moved on, but Gray still has a Golden State connection: Ionescu.

Though she’ll forever be connected to their neighbor in the north, Ionescu’s California roots can’t be denied. She remains a close friend of one of the state’s de facto First Families: the Bryants. When Richards’ documented the Liberty’s odyssey to Indianapolis and back on Instagram, a roast session that playfully skewered Ionescu for her series of State Farm commercials saw teammates refer to her as “Wally”—a possible reference to her hometown of Walnut Creek.

Conventional hoops wisdom wouldn’t necessarily pair Gray and Ionescu together. But their unlikely union has opened new avenues of offense for a Liberty team that has become somewhat too reliant on the triple. A faster, more agile Gray has been one of Ionescu’s favorite targets on the pick-and-roll, helping her average a career-best 7.9 points per game.

Pac-12 sisterhood and lessons learned in Berkeley have, perhaps, played a role in the instant chemistry, according to Gray. She compared the relationship she’s built with Ionescu to the one she had with Boyd. Gray struggled with Boyd in the pick-and-roll but Smith helped her master the art by working on her catching. Fortunately, it’s gotten to the point where Hopkins claimed that Gray was blessed not with hands but “a couple of baseball gloves.”

“Playing with Sabrina definitely brings me back to my Cal days, my Pac-12 days where I was playing with Brittany Boyd and I just basically had to catch any and everything that was in my way,” a nostalgic Gray said. “I see a lot of similarities in Sabrina today as well so I think that’s why the transition was so easy. I mean, who doesn’t love a guard that can pass?”

“Sabrina’s got eyes in the back of her head so she sees everything. Even when you think she doesn’t see you, she sees you, so you always just have to be ready.”

Gray has helped bring a sense of stability to not just the Liberty’s team endeavors, but to individual cases like Ionescu as well. The touted Oregon alum has endured a roller-coaster season, one that began on the highest of highs (a game-winning triple, with Gray on court, on opening night, and a triple-double in New York’s second Brooklyn contest) before descending to tough lows (an “overuse” injury and a month-long streak of single-digit scoring posts).

Yet, Ionescu has still found valuable ways to contribute to the box score, especially with her assist tallies, including a dozen in a double-double effort over Dallas on July 5. Gray tallied 11 points off the bench in the Liberty’s 99-96 win, a triumph that came two days after Ionescu found her for the de facto game-winning scores in a star-spangled comeback win over Washington on Independence Day weekend.

“It’s been an honor to just watch her be a pro and not worry about whether she’s here or whether she’s not,” Ionescu said of Gray, newly inked to a full-season deal. “When she’s here, she’s present in the moment, wanting to learn, wanting to get better in ultimately being a great lift for us off the bench. She’s helped us win a lot of these games.”

The pair’s newfound chemistry could wind up becoming a focal point of the Liberty’s playoff push. At 10-11, they own a minuscule one-game cushion over ninth-place Dallas, but will likely need a relatively quick start against some of the WNBA’s penthouse occupants to open the post-Olympic slate, going up against the red-hot Minnesota Lynx and defending champion Seattle Storm (twice) over their first three games back. With Minnesota and Seattle set to clamp down on the Liberty’s outside forces, the newly formed pick-and-roll duo could prove to be the key toward topping these dangerous squads.

East coast basketball salvation emerging from California, uniting the victorious stories of a touted franchise savior and a career journeywoman who deserves far more? Only in New York…