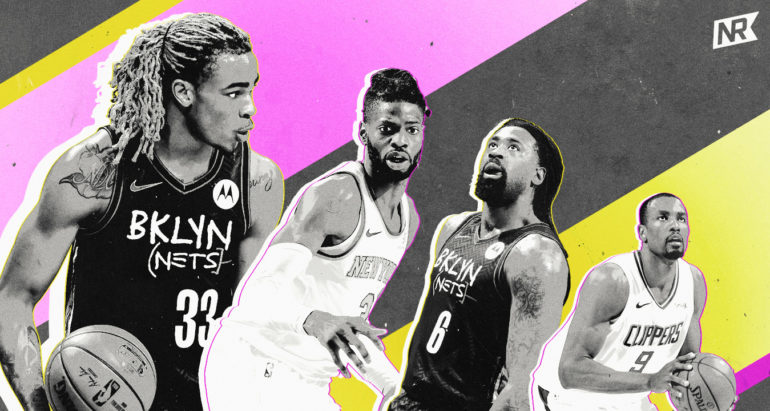 Writing an article about how the Brooklyn Nets need to get better during the offseason is tricky because they’re already arguably the best team in the league. Had one of James Harden or Kyrie Irving not gone down with injuries in Brooklyn’s second round series against the Milwaukee Bucks, the Nets are very likely in the finals as we speak. But injuries do happen, and the Nets did lose, which forces an examination of some of the potential holes on their roster.

The biggest question mark heading into next season for the Nets is their center rotation. The Nets played primarily small at the five, with 6’10” Blake Griffin being their main center during the postseason. While Griffin did an admirable job for the Nets, the team should look at their big man rotation, and ideally target a player with strong defense and rebounding.

Before we break down all the fun, new scenarios for how the Nets can build up their team, we first have to look at what the Nets are starting out with. The Nets have two young centers on the roster currently: Nicolas Claxton and Reggie Perry. Claxton was a defensive wonder last season, with a 107.5 defensive rating. However, his offensive game is a liability at the moment, shooting 48.3 percent from the field (on the lower side for a center) and only 66.7 percent on his free throws. It’s certainly possible that his offensive game improves. But relying on player development when a team wants to win now is a risky proposition.

Perry, despite what Barclays Center may have said just after Game 2 against the Bucks, isn’t ready to be a starting NBA center just yet. The former no. 57 pick will presumably be back on a two way deal again next year, but he’ll need to expand his minutes outside garbage time to make a real impact.

DeAndre Jordan remains under contract with Brooklyn next season. However, after a lackluster season in which he was a DNP for 11 of the last 23 regular season games and the entire postseason, the team will be looking for a new home for Jordan and his bloated contract.

To Re-Sign or Not to Re-Sign?

That leaves us with the small ball trio of Griffin, Bruce Brown, and Jeff Green. All of them are free agents this offseason. Ideally, the Nets would bring all three flexible roleplayers back. Griffin, who will still receive $29.7 million from his Detroit buyout next season, could conceivable come back to Brooklyn on a minimum contract. Be it drawing charges or diving for loose balls, Griffin was willing to be a versatile role player during his stint with the Nets, and the team would sorely miss his presence if he left.

Restricted free agent Brown played nearly every position known to the NBA and then some last season. His ability shined, which could fetch him more than the Nets are willing to pay. But he’s an integral part of the team and should be brought back if possible. Green settled into being more of a wing player than a small ball five during the post-season, but he was always there to step up when others went down, as seen in his 27 -point performance against the Bucks in Game Five. Green has said that he feels he deserves more than the veteran minimum, and ironically his strong season in Brooklyn may be what takes him away from the team. However, the team should at least make a push at re-signing Uncle Jeff.

Who should the Nets target?

The first option for the Nets would be to target a big man that can play a majority of minutes for the team. A name that’s been often linked to the Nets this postseason is Myles Turner. The Indiana Pacers already have a viable big man option in Domantas Sabonis, which has led to Turner received plenty of trade buzz. Unless Spencer Dinwiddie gains a sudden fondness for Indianapolis, a trade for Turner would likely revolve around Nets sharpshooter Joe Harris, another name in trade talks after his postseason struggles.

Harris lead the league in 3pt% last year at 47.5 percent, but posted a much weaker 24.04 percent in the postseason. Turner would give the Nets size and strong defense, but injuries — he’s played 65 games or less in four of his six season — and poor shooting percentages — 47.7% from the field last season — could make the Nets hold off. Plus, Harris was a vital part of the team’s core, so giving him up may do more harm than good.

If the Nets would rather not trade Harris, one option would be a sign and trade using Dinwiddie to land Los Angeles Clippers veteran big Serge Ibaka. Dinwiddie has expressed interest in playing in LA. Another Clipper, Marcus Morris, would be a solid option in a sign-and-trade for Dinwiddie if the Nets continue to run their small ball scheme.

The Nets also have the option to play small at their center spot for the most part, but to have a bigger center that can play limited minutes every night to counter the size of players such as Embiid and Jokic (a role that some proposed Jordan play this postseason). One name that comes to mind in this category is Boban Marjanović of the Dallas Mavericks. Standing at a towering 7’4”, Marjanović could only play an average of 8.2 minutes per game in the regular season and 20.2 in the postseason due to how he was built. Those minutes were useful to the Mavs, as Marjanović was a +0.7 in the regular season. A Marjanović signing would only make sense under the assumption that Griffin returns to the team, so the two of them and Claxton would split most of the center minutes.

Nerlens Noel of the New York Knicks would be another candidate due to his strong defensive play. He could take a crosstown trip to join the Nets on an MLE. Since the Knicks already have Mitchell Robinson, they could be willing to part with Noel. He’s a solid rebounder and defender, even if he doesn’t offer a ton of size to the team. Per Ian Begley, the Nets are interested in Noel.

Veteran centers Enes Kanter and Dwight Howard could be options for the Nets on minimum contracts. But with neither offering more size than Griffin, and Howard in particular having a rocky relationship with James Harden, these signings wouldn’t add a ton to the team.

Hassan Whiteside is an interesting option for Sean Marks and the Brooklyn Nets. Whiteside recently played for the Sacramento Kings on a veteran minimum, so he could conceivably do the same in Brooklyn. Standing at 7’0” he would give the Nets the size they lack, and he has been an above average defender for most of his career. One major concern with Whiteside would be that he just wasn’t that good last year, scoring an overall +/- of -2.9. Thought to be washed up players have shined in Brooklyn before (just look at Blake Griffin, he went from being a -5.5 in 2018-2019 to being +2.8 this past season), but it’s still something to consider.

Lastly for this article, two current Cleveland Cavaliers could be options for the Nets as well. Larry Nance, Jr. could fit into the Nets small ball five rotation, though he could also be an option at the power forward. His athleticism and defense make him an appealing option for many teams — including the Cavs who may choose not to trade him. On the other hand, Tribeca resident Kevin Love could (and probably would) land in Brooklyn if bought off. His defense won’t help the Nets much, but he’s a strong rebounder and would be a solid option off the bench.

Those are some of the most interesting, talked about, and likely scenarios for the Nets center rotation next year. Of course, there’s other players they could land, and even some that while unlikely to come to Brooklyn would be great fits and fun to speculate about! We’d love to hear any big men you’d like to see Brooklyn go after this offseason, or what you want them to do with the centers they currently have.