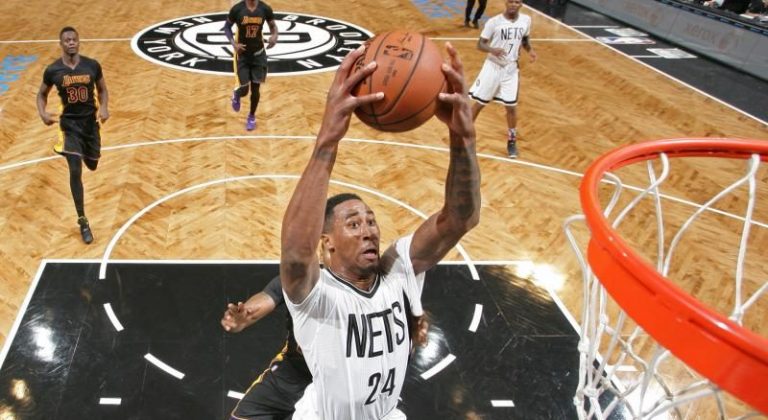 Rondae Hollis-Jefferson’s encouraging early season form has not gone unnoticed, and he and the Nets coaching staff deserve a lot of praise. He is playing consistent basketball and very well offensively. The 22-year-old, third-year forward, is the longest-serving Net on the roster, and he is now showing glimpses of his potential more regularly.

In his first two seasons, Hollis-Jefferson averaged 7.3 points per game. After nine games of the season, he is averaging 15.7 points, 5.2 rebounds, 1.4 assists, 1.1 steals and 1.1 blocks in 27.3 minutes per game. His field goal percentage has also risen to 52.2 percent, compared to last years of 43.4 percent.

These stats show Hollis-Jefferson has taken a significant jump and has been extremely effective and efficient on offense. Racking up 15 points in 10 field goal attempts a game is pretty impressive. He has become a reliable option in the motion offense, and his consistency has been key in gaining Kenny Atkinson’s trust, as well as playing a career-high in minutes per game this season.

This season, Hollis-Jefferson has turned the corner and has become an influential part of the Brooklyn Nets’ offense. This is a big difference compared to last season when he was unreliable, wildly out of control and struggled with his jumper, often leading to frustration. He has stepped up and is now poised to have a bigger role within the team.

Rondae Hollis-Jefferson’s newfound confidence with his jumper has transformed his game to a certain extent. It has opened his game up, and his improved shot gives him a little more room to drive to the rim, making his life just a little easier. He has obviously worked tirelessly in the offseason to dial in his smoother shooting form, which has looked good in the early stages of this season. It is a huge difference to last season, when he lost belief in his shot, and it was a matter of hope that his shot would fall. This year, the difference is he believes in his shot. This is the kind of attitude he has to take with him at all times; he cannot allow a poor shooting night affect him going into the following game.

Rondae Hollis-Jefferson has been more precise with his shot selection. He has been shooting from areas where he is most comfortable, and that has been pivotal to his success. The University of Arizona product is very athletic and is utilizing this asset by getting to places on the floor where he wants to be. He knows his three-point shot is a work in progress, so he has been doing a good job at getting to the rim and flourishing in his midrange game.

Even when he has been tightly guarded, he somehow manages to rise over defenders and make the shot, due to his athleticism and reach. His two-point percentage is at an impressive 52.7 percent, and now, defenders have to keep an eye out for him. He is also using his athleticism to get great effect by going to the rim and finishing off his moves. At the rim, he has shot 17-of-31 (54.8 percent).

It seems as if he has gained some strength in the offseason. This has improved his ability to finish when he gets to the hoop, which will be a big weapon in his arsenal. Furthermore, this results in a fair amount of free throws. He is able to get cheap points and leads the team in free throw attempts for players who have played more than one game, with 5.9 free throw attempts per game. Not only is he getting to the line; he is hitting them at a career-high percentage of 84.9 percent, compared to 75.1 percent last season.

This season, Rondae Hollis-Jefferson has matured as a player. With a year of experience under his belt playing in Kenny Atkinson’s motion offense, he now has a better understanding of his role in the system. He has demonstrated he is a player with a much more controlled aggression when he chooses to attack the basket. Last season, he would drive to the rim just because that was his best chance at getting a basket, due to his lack of a solidified jump shot. This year, he is thinking more and picking the right moments. Also, he is not trying to do too much and is playing within Atkinson’s system and the flow of the game.

He has proven he can pull up for a midrange jumper off the dribble and play a little post-up game with his back to the hoop, adding more versatility to his game. Hollis-Jefferson is now shrewd enough to change his speed when dribbling to deceive opposing defenders, making him harder to guard. However, one issue is when Hollis-Jefferson handles the ball, he still has some tendencies to be reckless. Currently, his turnovers are at 1.8 per game, and this is something he can improve on.

With Jeremy Lin out for the rest of the season due to a knee injury, the Brooklyn Nets need players to step up and fill the void Lin has left in the offense. Someone has to take the mantle and take on some of the responsibility. Rondae Hollis-Jefferson has taken on the challenge with both hands, along with backup point guard Spencer Dinwiddie, who deserves a mention. Hollis-Jefferson is proving himself as more of a leader for the Nets. He has even been vocal when the team plays poorly.

While it is only a small sample size of games so far, you cannot help but be impressed by Hollis-Jefferson. At 22 years old, Hollis-Jefferson will have many ups and downs, but the Nets cannot put too much pressure on his shoulders. There are still many positive signs he is heading in the right direction, however, and he is taking that leap into being a more well-rounded player who can play defense, as well as contribute to the Nets’ offense.

Finally, if Rondae Hollis-Jefferson can maintain this consistency, he will undoubtedly be a key player for the Nets. He has the right attitude and enthusiasm to succeed. The rising star will have to continue on working on his weaknesses and develop his skills to become a more refined player.