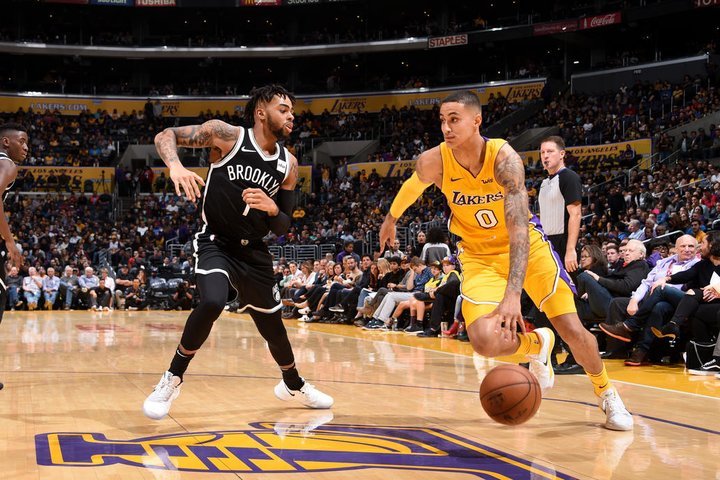 It is a new month of the 2017-18 NBA season, but unfortunately for the Brooklyn Nets, they have not begun a new win streak. In the month of November, Brooklyn hits the road for all but four games. The trip began in Los Angeles on Friday night, and the Nets simply could not get enough stops against the Lakers. Their losing streak extends to four, heading into an even more brutal week.

Brooklyn has two days off before it faces the Phoenix Suns and Denver Nuggets in the first back-to-back of the week on Monday and Tuesday, then another two days off, with the Portland Trail Blazers and Utah Jazz following in a second back-to-back.

It was not too long ago the Nets could depend on Brook Lopez to put up 20+ points on any given night. Though the trade over the summer — D’Angelo Russell and Timofey Mozgov in exchange for Lopez and the Nets’ pick (who turned out to be Kyle Kuzma — benefited both parties for different reasons, Lopez’s absence in Brooklyn has unquestionably been felt. The 7-footer is one of those rare “old school” bigs who continues to be efficient and effective, night in and night out. As The Ringer’s Kevin O’Connor tweeted after the game, Lopez is “a model for all young bigs.” Talk about high praise.

In terms of “revenge” games, Lopez definitely came out on top in this one. He led the Lakers with 34 points on 13-of-23 shooting from the field and 6-of-9 shooting from behind the arc! Los Angeles can thank Kenny Atkinson and the Nets for the big guy’s three-point shot, and he absolutely torched Brooklyn. Pair all of that with 10 rebounds, and Lopez notched his second double-double of the season.

Brooklyn may have gotten Russell and Mozgov out of the deal, but as expected, Lopez’s production is difficult to replace. We miss ya sometimes, big fella.

The “bigs problem” in Brooklyn

Speaking of big men, it is clear the Nets have a deficiency in that category. Atkinson is infatuated with small ball, perhaps as a result of this lack of depth. On some nights (especially nights when the Nets shoot higher than 23.7 percent from long distance), it works out. On other nights, particularly when Brooklyn matches up against the familiar gentle giant that is Brook Lopez, it only results in disaster.

Rookie Jarrett Allen missed his second consecutive game with a left foot strain, only adding to the burden already present for the Nets. Ironically, Tyler Zeller — who has garnered more than 16 minutes of action for two straight games — looked a lot better than starting center Timofey Mozgov. Zeller played three more minutes than Mozgov and was inserted into the game midway into the first quarter. In those five and a half minutes (of the first) alone, Zeller blocked two shots and scored six of his nine points.

More questions than answers remain after Friday night, but it is evident the Nets will not be solving this problem without another potential signing. Who, is the question.

I would not be the first to admit some of the fouls called on Spencer Dinwiddie looked highly questionable. The Nets certainly missed his usual presence (he only played 15 minutes), with the game spiraling out of control in the second quarter.

His foul trouble began as early as 4:13 in the first quarter, only 20 seconds after he checked in for Russell. Two and a half minutes later, Dinwiddie picked up his second personal foul. Then, two minutes and 15 seconds into the second quarter, he picked up his third.

Dinwiddie did not hit the court again until midway into the third quarter. After entering the game again, The Mayor grabbed a board, as well as assisted a Rondae Hollis-Jefferson layup and Allen Crabbe three-pointer, before picking up his fourth and fifth fouls within eight seconds. During that period, the Nets had trimmed the Lakers’ lead down to single digits, but could not get stops.

With four seconds remaining in the third, Dinwiddie checked back in and drilled a 31-foot jumper at the buzzer. Five fouls do not stop this guy from doing things like that, but they unfortunately prevent him from being on the court for long.

On another note, Nets fans finally got a glimpse of what it would be like to have Dinwiddie and Russell on the court at the same time. Though brief (only about the first five minutes of the fourth), it was something. It will be intriguing to see how often Atkinson uses both of them simultaneously, moving forward in the road trip.

Say it with me: Free throws are not a sustainable method of scoring points, especially if the team is not going to knock them down. The Nets attempted 38 free throws on the night, compared to the Lakers’ 27. Many of these (11) came from Allen Crabbe, who drew fouls on three shot attempts from behind the arc. Pretty canny of the marksman, who was also half money (literally) from downtown, as he finished on 4-of-8 three-point shooting.

Drawing fouls and gaining foul shots as a result are not bad techniques for a team to use; the Nets just need to spice up how many of those free throws they actually make.