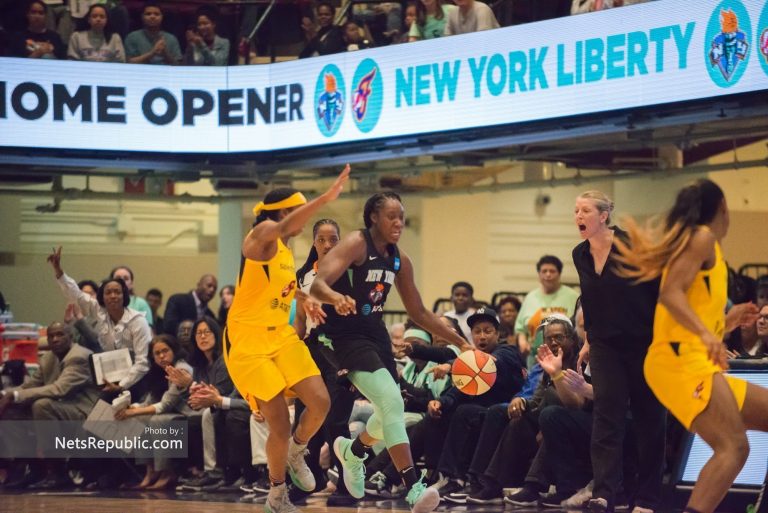 Friday night’s New York Liberty season opener didn’t go the way the Liberty were hoping, as Indiana Fever rookie Teaira McCowan hit a shot at the buzzer to give the Fever an 81-80 win:

The Liberty got off to a fast start, going up 12-2 before the Fever subbed McCowan in for starting center Natalie Achonwa. From there, Indiana crept back into the game — they ultimately led by as many as 12 before Liberty rookie Asia Durr sparked the team early in the fourth quarter and got the game back in New York’s hands. It slipped away, though, in the end, with the Fever going on a 7-0 run in the middle of the final quarter. Both teams struggled to score down the stretch.

So, what did we learn from the team’s season-opening loss?

While this Liberty team can feel like a lot of disparate parts that have been thrown together at times, Friday’s game gave us signs that the team has found its three player core to build around moving forward.

First, and most obvious, is Tina Charles. Charles is one of the league’s best players and, with injuries striking around the league, could be a sleeper pick for MVP if the Liberty end up being a playoff team.

Charles had 32 points on 11-for-23 shooting and grabbed 12 rebounds. She opened the scoring with a cutting layup off an Amanda Zahui B assist:

Charles continued to score with her arsenal of post moves and midrange touch. She ran the floor well and, in a bit of an unexpected twist after last year, took just one three-pointer, a wide-open look from the left wing in the second quarter.

But we all knew Charles was good. The bigger question was if other players could step up for this team. Friday suggests that at least a couple can.

Second-year guard/forward Kia Nurse had an up-and-down season last year, but some big numbers in the preseason had hopes high that she’d take a step forward. On Friday, Nurse started out well, making three shots in the first quarter, but she didn’t make another field goal in the game, finishing with 12 points on 3-for-10 shooting. She was 2-for-4 from three, an encouraging sign after she struggled from deep last year.

And then there was rookie Asia Durr. After coming off the bench and getting off to a bit of a slow, Durr turned it on in the second half, helping fuel an 18-2 Liberty run at one point. Here was Durr’s first WNBA bucket:

She also did a great job getting back defensively after a second quarter turnover to get this block:

Durr finished with just eight points in her debut and picked up four fouls, but there were a lot of good signs that she was the right pick by this team and a huge part of the future core.

The Lack of Han Xu Minutes

The team’s other rookie, Chinese center Han Xu, didn’t play in the first half. She checked in with 4:45 to go in the third and checked out with 3:40 to go.

The Fever basically saw Han check in and immediately countered by putting McCowan back into the game. McCowan negates the height advantage that the Liberty got from Han, and McCowan’s physicality meant the best option the team had was to get Reshanda Gray into the game instead.

During that minute that Han was on the court, she did the following things:

Obviously, not the start to the career than Han Xu and the Liberty were looking for, but the Fever were also a really tough matchup for her due to McCowan’s size. Fever head coach Pokey Chatman wasn’t going to let Liberty head coach Katie Smith get the matchups she wanted for Han, so the best option was just to send her back to the bench.

Zahui B has been a pretty low-usage player for her entire WNBA career, but even in just 15.9 minutes per game last year, the center really embraced the idea of being a stretch five, taking 2.1 threes per game. With the starting center role now hers, Zahui came out on Friday and committed more fouls (five) than she had shot attempts (four).

It’ll be interesting to see how the center rotation works this year for New York. Kiah Stokes is still in Europe, but her return will be very welcomed by a team that needs reinforcement up front. Zahui’s an exciting player, but she doesn’t really do some of the traditional center things — the post play and the rebounding — that you need. That can be fine, especially on a team where Tina Charles is around to do those things, but she has to have her outside shot going to make up for that.

A Look At The Numbers

Thanks to a newly revamped WNBA stats site, we’ll have access to a lot of great advanced stats and numbers this season. Here are some that stuck out to me on Friday:

Message to the team after the lost….

“Just stay positive, lots of positive things. But again turnovers, we can’t turn it over 16 times. We’ve been talking about this. It’s one of our emphasizes…taking care of the ball. Our field goal percentage got better but putting the ball in the hole…Lots of little stuff, but overall letting them know how tough this league is and that most of these games will come down to the wire. It’s those things that build up and put you in the dog fight.”

“I thought she was aggressive, yet the boards are probably most impressive for me with her getting in there especially that last o-board she got…Lots of good things, but to fight that hard to come up short is tough, but we’ll lace up again against them down at their place next week. Just wish we were a little more consistent throughout the game.”

Tina Charles on the disappointing finish…

“We came out and played hard. We jumped on them but then we died down a bit. The turnovers hurt us; I think they had 16 points off turnovers. Then us just boxing out, (Teaira) McCowan did a really good job of getting offensive rebounds. Bria Hartley gave us a great spark and Reshanda Gray played great and it’s good to see her back in the WNBA.”

Kia Nurse on her second season in the league…

“You just have a better idea of what to expect every single game. People can tell you how hard it is to play in this league and how hard it is to make this league but once you are truly in it – you see every single night is a grind and you’re playing the best players in the world at your position it’s something that’s tough to explain. Now coming in as a second year, you feel more comfortable.”

Nurse on mentoring the rookies…

“It’s a tough transition to come from college where everything is taken care of. Now it’s your obligation to manage. I try to keep it light-hearted with them and they get an open space where they know if they need anything, they have me.”

Asia Durr on her first game in the league…

“It’s a process. It’s my first year and everyone goes through that process. This is a change now. It was just two months ago I was playing against college players. It’s a long road you have to take it step by step and stay present.”

Bria Hartley on the relationship with new teammates…

“I feel like when you have players like (Asia) Durr coming in, it’s easy. She’s a really good play maker, she makes my job easier. She is really good in a lot of situations. I watched her play in college and that helped. I’ve just been learning what she likes. I just try to talk to her, what plays to you feel most comfortable in, so I know what to call. I just want to put her in the best position to do well.”