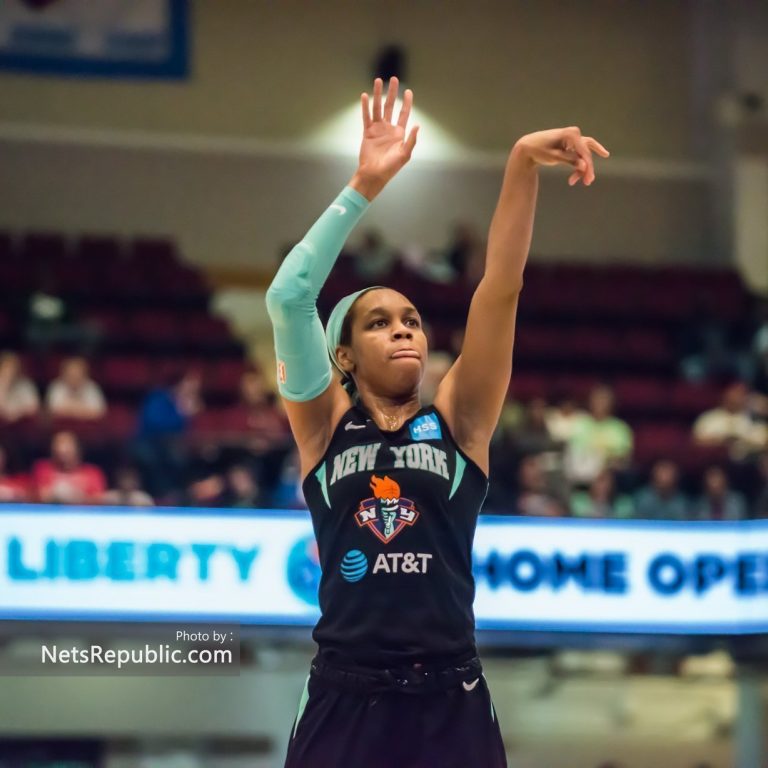 After their heartbreaking season-opening loss against the Indiana Fever via a Teaira McGowan buzzer beater, the New York Liberty was looking to even both the season series and their overall record. Things did not go according to plan from the opening tip on Saturday night, though, and the Liberty ended up losing 92-77.

The game started about as badly as one could imagine, as the Fever scored 11 straight points in the first 2:30 of the game. An early time out by coach Katie Smith seemed to calm the Liberty down a little, as Tina Charles stopped the bleeding with a putback off of her own miss.

While the Liberty seemed to keep the score relatively even from that point onwards, it was clear that Indiana was firmly in control. The Fever seemed to be able to hit any shot they wanted, as evidenced by Tiffany Mitchell’s fadeaway bank shot to beat the shot clock.

New York was able to keep pace in the second quarter, and at the half were fortunate to be only behind by 16 points. Although it would have been difficult, the Liberty had a chance to make the game interesting with a strong third quarter. Fever guard Kelsey Mitchell made sure that did not happen, scoring 14 of her 23 points in the period and helping the Fever’s lead to reach a whopping 28 points.

This surge essentially ended any hopes of the Liberty making a comeback, and due to a mini-run in the fourth quarter by the Liberty reserves, the final score did not truly indicate how much the Fever dominated this game.

So what are three important storylines that could be taken away from the second game of the young 2019 WNBA season.

It looks like the second overall pick’s time on the bench came to a quick end. After starting her first WNBA game on the bench, Durr took the place of Rebecca Allen in the starting lineup last night. While she (like most of her teammates) struggled mightily, only making four of her 12 shot attempts and finishing with 12 points, she stayed aggressive, yet smart, the entire night.

This obviously was not the first start that the rookie out of Louisville wanted, but she showed a lot of promise. Being that it was a tough night for the Liberty as a whole, her struggles were not too much of a surprise. Expect Durr to figure things out relatively quickly.

When entering the game, most people would expect Tina Charles to be Liberty’s most effective big. However, the Fever’s game plan slowed down the All-Star significantly due to heavy attention and a swarming defense, rendering her to an ineffective 6-17 from the field and seven turnovers. This led to an opening for Reshanda Gray. The forward, who turned 26 on Saturday, had an individual performance that could qualify as a birthday present. Gray had 11 points and nine rebounds, along with two steals in an impactful performance that had her as the only rotation member with a positive plus/minus.

The WNBA has updated its stats page to provide us with even more numbers. For those of you who pay special attention to the numbers, below are some key figures that impacted this Saturday night matchup.

“Energy wasn’t good enough and we didn’t hit shots. [Indiana] hit shots and shot 60-something percent, so the first quarter literally was the ballgame.”

On comparing the two meetings with the Fever

“For [Indiana], they were able to play another game and gain the experience from that. Other than that, the play calls change. That’s about it.”

“We started off slow. Our defense wasn’t great tonight. We missed some shots. As the game went on, we had some people come in and make some runs, get some stops. We had our spurts but we started off slow tonight.”

On playing a team twice in eight days

“It gets harder each time. The game gets faster, so we’ve got to become a better team. That’s pretty much it.”