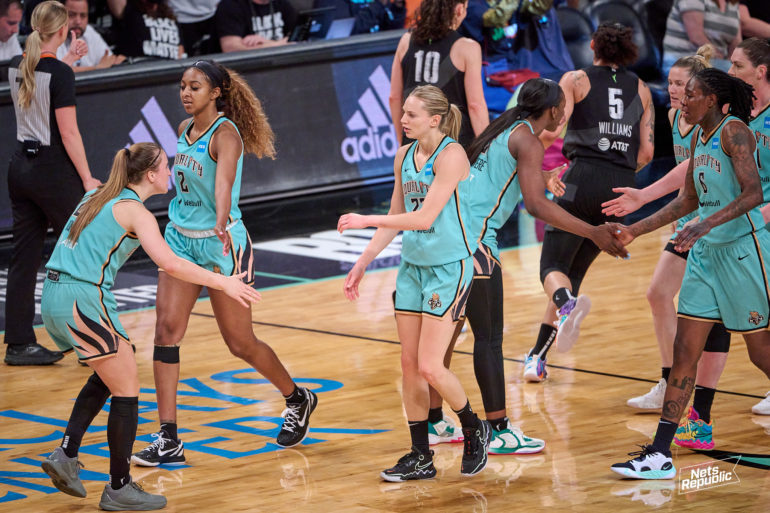 The scorching hot New Liberty look to end their stellar month of June on a high note as they host the Atlanta Dream in what will be their final home game before the All-Star Break. It’s a familiar opponent, as the Liberty defeated the Dream in Atlanta in their last game on Friday, June 24.

The Atlanta Dream got off to a stellar start this year, but have cooled off a bit in the month of June. This is due to the fact that their schedule has become increasingly difficult and have been dealing with multiple injuries as of late.

Coming off three straight losses, two at home, to the Liberty 89-77, the Sun 72-61, and on the road to the Mystics 92-74, the Dream will be looking to end their three-game skid in Brooklyn and avenge last week’s 12-point loss to New York. It surely won’t be the same team New York faced in Atlanta, as guards Kristy Wallace and Erica Wheeler are healthy again. The two combine for 17.6 points per game (PPG) and both average over 24 minutes per game.

We might also see a face that hasn’t appeared all season for Atlanta due to overseas commitments and a lagging knee injury: Tiffany Hayes. The 10-year veteran forward averaged 14.7 PPG and her 40.5 three-point percentage ranked 10th in the WNBA last year.

The Dream are 3-6 on the road this season, with their only wins being at Dallas and Indiana.

It’s hard to find a team playing better than the New York Liberty in the month of June. The Liberty have won seven of their ten games during this stretch, with two of those losses coming at home to Chicago and Seattle. New York has also been a profitable from a betting standpoint to those who bet the Liberty against the spread, as they’ve covered the spread in eight of 10 games this month.

The Liberty have dealt with their own injury woes this season, as they are still without the services of 2021 All-Star Betnijah Laney due to a knee injury. Even with losing Laney, the Liberty offense has found a rhythm this month and doesn’t appear to be slowing down anytime soon.

This will be the first game in the month of June without guard Crystal Dangerfield in the starting lineup, as she’s currently not on the roster due to CBA restrictions and should be back to action July 3. Dangerfield has proven to be an effective part of the Liberty’s success in relieving some of the ball-handling duties of Sabrina Ionescu.

Starting in Dangerfield’s place will be Sami Whitcomb, who has found her stroke from the three-point line as of late. In her first nine games, Sami shot 11-47 (23 percent). Over the last nine, Sami has made 22 of 53 (41.5 percent).

You still might be able to find Liberty -5.0 at other books, but it’s hard to not to trust a team that’s been as hot as New York against a team that struggles on the road against tough competition. For all of my WNBA picks all season, be sure to follow @spread_thefloor on Twitter.

*Betting Definitions
Spread: The spread is a number or the “betting line” set by bookmakers at the sportsbook which is intended to even the playing field between two teams and give a reason for bettors to bet on either side of the game. The betting Favorite is considered the better team and listed with a Minus (-) sign while the Underdog is listed with a Plus (+) sign.

Total: The amount of points scored by both teams combined in the duration of the game. As a bettor you can bet over or under the set total.

Moneyline: A wager on which team will win the game.

If you choose to make use of any information on this article including online sports betting services from any websites that may be featured on this article, we strongly recommend that you carefully check your local laws before doing so. It is your sole responsibility to understand your local laws and observe them strictly. Nets Republic does not provide any advice or guidance as to the legality of online sports betting or other online gambling activities within your jurisdiction and you are responsible for complying with laws that are applicable to you in your relevant locality. Nets Republic disclaims all liability associated with your use of this website and use of any information contained on it. As a condition of using this website, you agree to hold the owner of this website harmless from any claims arising from your use of any services on any third party website that may be featured by NetsRepublic.

If you think you have a gambling problem or know someone who does, please contact The National Council on Problem Gambling at ncpgambling.org or 1-800-522-4700 call or text.