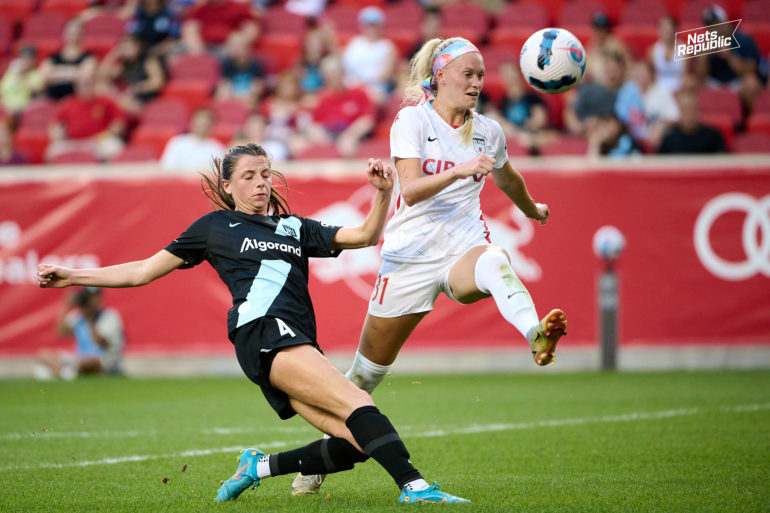 Gotham FC fell to 10th place in the NWSL table Saturday evening after a 0-3 drubbing by the Chicago Red Stars, the NJ/NY club’s third loss in as many games.

By the way Gotham started the match—pressing high and winning the ball around Chicago’s 18—viewers might have expected a different result, or at least a more competitive game. And with center back Gina Lewandowski making her final professional appearance, a victory at Red Bull Arena to cap off her 15-year career certainly would have been the storybook ending. But, although Gotham’s pressure and initial intensity yielded a couple quick chances to go ahead, the Red Stars swiftly wrested control of the match.

In the 15th minute, Sarah Luebbert found the opener from a ball cut across the box via Tatumn Milazzo. Nine minutes later, Vannessa DiBernardo doubled Chicago’s lead, perfectly placing her shot past Ashlyn Harris and into the bottom right corner of the net. Zapped of that early energy, Gotham were left chasing a game that already felt far from their grasp.

And such has been the story of their season: failing to take their chances as they come and being unable to change a game’s dynamic once they’ve fallen behind. The statistics so far are troubling: five goals scored and 12 conceded in eight games played.

Speaking after the match, head coach Scott Parkinson too was perplexed by those numbers.

“I’m looking at [the numbers] and [I’m thinking] is this right? Can this be right? That the expected goals for us was 1.92 and the expected goals for them was 1.79? So statistically, we should have scored more goals than Chicago. And so it’s just one of them times I think where they’re low in confidence and the players see the goal and it probably looks this big,” Parkinson said, depicting a narrow goal with his hands. “Whereas Chicago right now look up and the goal probably looks twice as big as it actually is. So we just have to keep getting them in front of the goal, keep letting them feel themselves hit the net in training every week. And just keep pushing them to believe that they can be deadly and finish.”

As for what went wrong in this specific match, Parkinson took the blame.

“I think I got that wrong for the first half. Tactically, I think it was okay. I think [what I got wrong] was maybe preparing the players to be able to execute it,” he said. “So I don’t think I did my team a good service today, which is not okay. So I will make sure that I am better and better for them.”

Parkinson tried to change the game at the start of the second half by bringing on Taylor Smith and Jenna Bike to make their Gotham debuts after signing with the club last week. And though they conceded the dagger from Ella Stevens in the 84th minute, it was a better second half from Gotham.

So, if Parkinson is taking anything positive away from this match, it’s that both players showed they could play a role for his team in the remainder of the season: Smith with her work rate on the forward line and experience as a 7-year league veteran and Bike, a rookie, could provide a new option at wingback when the team needs to change their shape.

And yet, these aren’t really the areas on the pitch where Gotham need the boost. Saturday’s match proved again that Parkinson may need to rethink his midfield personnel. They struggled to play through Chicago, forcing Gotham to bypass the midfield and play direct. Defensively, Gotham gave Chicago too much time and space. Chicago was able to deftly pass around Gotham to get into dangerous areas.

The addition of Taryn Torres as a partner to McCall Zerboni seemed like a possible solution for a sturdier midfield, but neither are the type of player who will break the lines with their passing. And Gotham need help going forward, especially without Kristie Mewis—who, along with Margaret Purce, Ifeoma Onumonu, and Estelle Johnson, is off on international duty for all of July—available to connect the midfield and forward line.

It’s a question that needs to be sorted before a playoff spot becomes well and truly beyond reach. Gotham holds the advantage of having two games in hand on the top half of the table, meaning a couple positive results will totally change the complexion of their season, but that’s much easier said than done.

In her final post game remarks, the retiring Lewandowski offered her teammates a few words on how they might pull themselves out of this spell of poor form.

“On the field I just told the team: soccer is soccer, right? It’s a game. There’s ups and downs, but it’s about how we get through those,” said Lewandowski. “We’re only halfway through the season. It’s all about how you go into that next game and turn things around.”