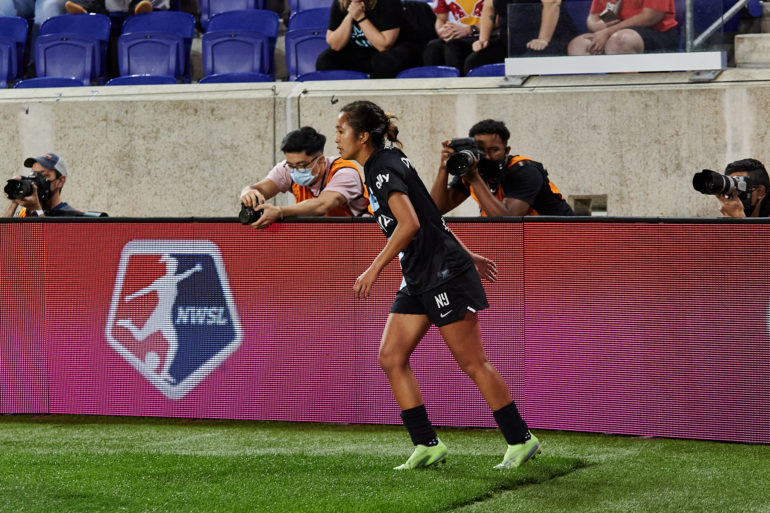 Gotham FC suffered a 1-0 loss on the road Saturday night, conceding a late goal to Kansas City Current in the 84th minute at Children’s Mercy Park.

In what was a pretty even match, Gotham will be disappointed not to at least come away with a point for their efforts. The NJ/NY side created enough chances to find a result, but, as has been a theme this season, fumbled in the final third.

“We just didn’t finish our chances,” head coach Scott Parkinson said following the match. “We created some good chances and just didn’t finish them. [I’m] not overly disappointed with the performance, whatsoever. Just feel for the team a little bit — maybe coming up with a point would have been fair.”

Many of Gotham’s best chances came in the first half. Seemingly, the game plan for Gotham was to create opportunities by pressing KC in their defensive end, which sparked a number of counterattacks for the visitors. But Gotham could not find the final pass or final touch to beat the Current’s Cassie Miller in goal.

On various opportunities, Gotham’s attackers were either a half-step off in connecting in the box, or tried to play one more pass when the better option was likely to go straight for goal. One such occasion came in the 10th minute after McCall Zerboni intercepted a pass at the top of the Current’s box, playing in Margaret Purce, who then played a pass across the six-yard box for Ifeoma Onumonu to slot in the back of the net — but Onumonu never made the run. Later in the half, off a breakaway opportunity, Onumonu tried to lay a pass off for Purce inside the box, but she played it just a step behind Purce, who couldn’t then catch it cleanly.

The best chance for Gotham came in the 43rd minute after Paige Monaghan knocked the ball away from a Current player and found Onumonu. Onumonu carried the ball into the 18, where she gave it back to Monaghan for a strike near post. Monaghan very nearly beat Miller, but the keeper was able to get her fingertips to the ball and deflect it off the post.

As the second half continued without a goal, the game started to look more and more like a draw. But the Current’s substitutes brought an energy in the late stage of the game that Gotham could not replicate, and it cost them.

In the 83rd minute, substitute Izzy Rodriguez carried the ball down the left flank, drawing the Gotham defense before cutting the ball back to the top of the box for the late run of Kristen Hamilton, who beat Michelle Betos far post.

“[From] my perspective, I think that we just didn’t get our numbers where they normally are,” Betos said of the deciding goal following the match. “I think that we just kind of were a step behind at that point. We had our three back covering the six and [Rodriguez] is driving in, so Krieger had to leave to see if she can affect the shot because she was so close. And it was kind of a domino effect from there.”

Gotham now sit in 7th place in the NWSL standings, with 9 points and three league games still to play Sunday. The team will take some comfort in the fact that they still have three games in hand on the league leaders — but not much. Gotham’s troubles in front of goal — scoring just five in six games, with three coming in their Orlando opener — is not sustainable for a team with hopes of making a second consecutive playoff appearance.

Players on Saturday said it was a matter of turning in a full performance, which they feel they’ve yet to do this season.

“We haven’t walked away from a game this year yet, whether we’ve won or lost, and been like, wow, that was the perfect game,” said Betos. “We have to take it holistically. You can always look at the score line and be disappointed, which we are now and we will be for maybe the next 24 hours. We thought we could come away with more, especially with the chances we created, but at the same time, we take the good, we take the bad, we learn, we grow and we go from here.”