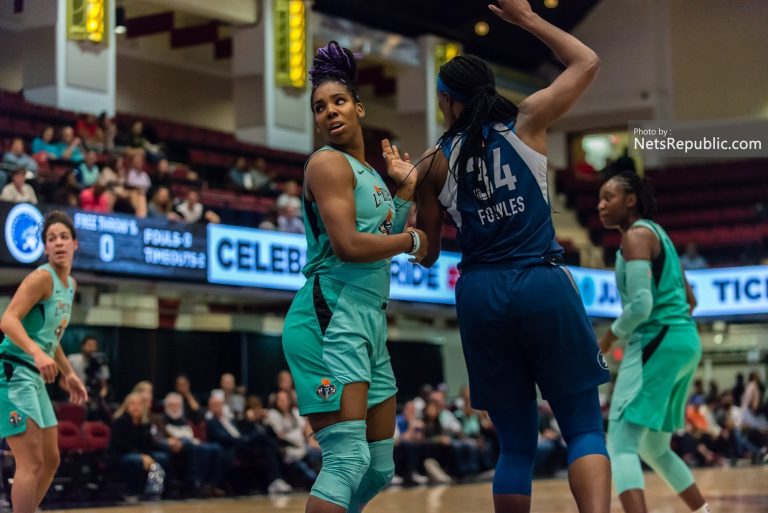 Gray, set to enter her second year with the New York Liberty, is one of several basketball stars partaking in the Jr. NBA at Home program.

Young fans of the New York Liberty may be missing their favorite seafoam-clad stars in action, but new on-court material is now only a click away for basketball-starved athletes who would like to emerge from lockdown with a new skill under their belts.

Liberty center/forward Reshanda Gray is one of several basketball stars who have filmed videos for the Jr. NBA at Home program. The video compilation is described in a league statement as “a free interactive content series providing basketball skills and drills featuring NBA and WNBA players that can be completed individually and in limited space to inspire youth around the world to stay active in a healthy and safe way, especially for those who aren’t able to play with friends and teammates but still want to work on their game and connect with the WNBA and NBA”. According to a statement provided to Nets Republic, the series has generated over 57 million views thus far.

Gray is on hand…literally…to teach the concept of ball slaps, a ball-handling drill that improves hand strength. She starts with a basic exchange of hands before making it “a bit challenging” by swinging it around her head.

If Liberty fans are indeed looking for sources of inspiration during these trying times, Gray would certainly be one of the best sources. The Cal-Berkeley alumna returned played her first WNBA regular season games in three years. She wound up partaking all 34 games and set new career-best averages with matching efforts of 5.2 in scoring and rebounding. Her best performance of the season was a double-double showing in a June win over Dallas, where she picked up 13 points and 11 rebounds.

Gray joins NBA and WNBA stars of the past and present to help kids learn some skills in confined spaces. Other volunteers include Jewell Loyd of the Seattle Storm and Chiney Ogwumike of the Los Angeles Sparks.