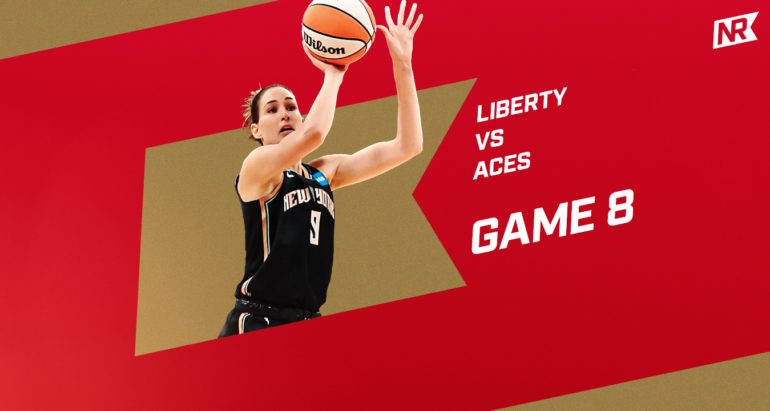 The Liberty took the court last night with a 5-2 record, fresh off a month of accolades in which Coach Hopkins (Coach of the Month), Michaela Onyenwere (Rookie of the Month), and Sabrina Ionescu and Betnijah Laney (Players of the Week) were recognized for their achievements. The visiting Las Vegas Aces posed an imposing matchup problem with their talented front line of Liz Cambage (who dropped a W record 53 points on the Liberty back in her Dallas days) and reigning MVP and all-around superstar A’ja Wilson. That pairing did not disappoint; Cambage set the tone early and Wilson stayed aflame all game long, enroute to 30 points and 12 rebounds.

By the final whistle, Vegas prevailed by a dozen, 94-82, but the game was simultaneously more and less competitive at stretches than that score would indicate. The rebounding battle was even, but the largest disparity came at the line, where the Aces had 29 attempts to the Liberty’s nine. Some of that could be attributed to a smaller team trying to contain a larger one, but it did feel like a lot of the 50/50 calls went in Vegas’ favor. Coach Walt Hopkins mentioned the free throw gap in his postgame availability, but (smartly) declined to discuss it in further detail.

In the loss, Betnijah Laney notched another 20+ scoring output, moving the consecutive game tally to eight to start the season. Sabrina Ionescu struggled mightily with her shot tonight, hitting just two of her 13 attempts, though she did fill out her line with nine rebounds and nine assists, nearly notching a double-double the hard way. Aside from Laney, three other Libs hit double figures scoring: Rebecca Allen (16), Sami Whitcomb (14), and Michaela Onyenwere (11). More on all of them shortly!

From Opening Tip, Aces Were Wild

For the second straight game, the Liberty got off to a slow start. They lost to the Atlanta Dream after falling behind by 11 after the first, and they lost last night to the Las Vegas Aces after trailing by 14 following the first quarter. The only other time they’ve fallen behind by double-digits in the first quarter this season? The blowout against the Washington Mystics. These early deficits have accounted for all three of the Liberty’s losses this year, and last night’s proved too much to overcome. The Aces scored on each of their first seven possessions, setting the tone early with Cambage and Wilson inside.

After the game, NR’s Geoff Magliocchetti asked Michaela Onyenwere about the team’s resiliency. I loved her answer. (Thanks to Crina Mustafa for cutting it up!)

About two-and-a-half minutes into the second quarter, a Wilson jumper pushed the score to 40-21, stretching the Las Vegas lead to a game-high 19 points. Then Bec Allen got hot, her shooting touch single-handedly willing New York back into the game. Over the next few minutes of gameplay, she would hit six of eight shots and score 14 straight for New York, while the defense strung together some stops.

After that 14-2 Allen run, the Liberty were back in it, down by just seven. They would trail by a manageable eight at half, reeling in a game that could’ve gotten ugly early. Bec would score just two points after the half, but her scoring barrage in the second quarter breathed life into a Liberty team that came out flat.

For a majority of the fourth quarter — from the 8:12 mark down to around the 2:30 mark — the Liberty were within five points. They expended so much energy in the comeback, getting as close as one midway at the four-minute mark, but couldn’t flip the lead. There were several instances where New York failed to convert on an attempt to tie or take the lead.  “No games are decided in one possession,” Bec Allen said in the postgame. She pointed out that the looks were good, and that while those clutch-time attempts didn’t fall tonight, it was not because New York forced bad looks. “it’s a good thing to know you’re getting in the right position and the shots you want to get.”

Shuffling Through the Action:

Next up: The New York Liberty (5-3) travel up to Mohegan Sun for a matchup with the league-leading Connecticut Sun (7-2) on Saturday, June 5. Tip-off is 7 pm ET on YES and NESN.