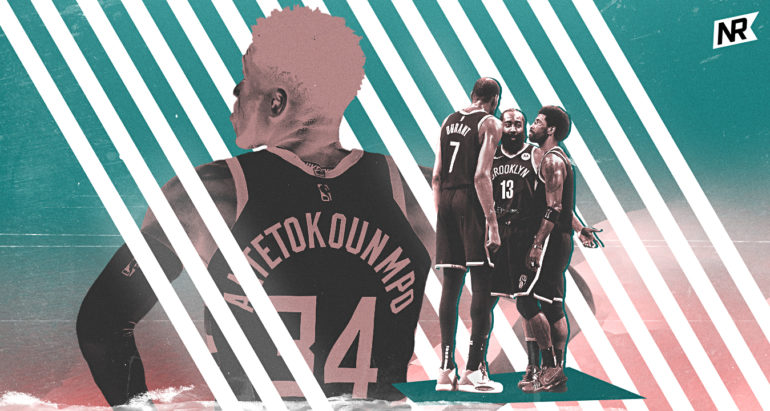 There is no shortage of content previewing the Eastern Conference Semifinals series between the Brooklyn Nets and the Milwaukee Bucks. Despite being the second and third seeds in the East, respectively, these two teams are the best in basketball. Of course, calling it an NBA Finals matchup in the second round may be a bit dismissive of the excellence that the Utah Jazz, Phoenix Suns, Philadelphia 76ers (barring Joel Embiid‘s health), and others have shown. But there’s no denying the winner of this series will be the heavy favorite to win the title.

And as these teams have been on a collision course since the Sixers took hold of the top seed in early May, storylines are set. Who the Nets will deploy on Giannis Antetokounmpo is the main one. Will DeAndre Jordan make an appearance? And on the other end, do the Bucks simply match up their Big 3 with Brooklyn’s three-headed monster?

But as the playoffs have progressed, new issues have come into the fold, namely injury concerns. Milwaukee will be without the defensive-minded, adequate-shooting Donte DiVincenzo for the remainder of their season. And Brooklyn will be without their dynamic small-ball center in Jeff Green for at least Game One, as he recovers from plantar fascia. Sure, none of the stars are absent, but these are two of the nine-ish most important characters of the series. It’d be foolish to discount the impact of their ailments. But there are other factors that have flown further under the radar in the lead-up to this series. Two of which fall on Brooklyn’s defensive end of the floor, which I want to highlight here.

Forcing James Harden to Guard on the Perimeter

Is certainly something Milwaukee should look into. Harden, to be sure, has displayed positive defensive qualities in Brooklyn. His stringent post-defense is well-documented at this point; it helps make up for the Nets’ size deficiencies. Outside of DeAndre Jordan, who, again, may not even touch the hardwood the rest of the year, Harden is Brooklyn’s most consistent boxer (box-outer? He boxes out, is what I’m trying to say). And, of course, his hands are unreal. He racked up steals and deflections in the first round.

But Harden often relies on those pesky hands far too much, instead of moving his feet and attempting to stay in front of drivers. His perimeter defense can look straight out of the YMCA, giving up open driving lanes to hunt for a steal, or failing to contest shots with a hand up. Here’s a less-than-flattering montage of some of his defensive efforts vs. the Boston Celtics:

Harden only appeared in one regular-season game vs. Milwaukee, and perhaps surprisingly, the Bucks didn’t target him on defense, despite matching up with Jrue Holiday. You figure in a best-of-seven series, with both teams having eons to prepare, Harden isn’t going to get off so easy this time, if he’s guarding Holiday. The answer, though, is probably not as simple as running Holiday-Antetokounmpo pick and rolls, which Brooklyn could simply switch. But if the Bucks see Harden’s perimeter defense as an exploitable area, the Nets could be in for a whole lot of Jrue Holiday. Who Harden is guarding will be the first thing my eyes dart to in the early stages of Saturday night’s Game One.

Is another potential swing factor in this series. And Nets fans could see the Brook Lopez of 2013, or at least something resembling it. In Milwaukee’s Game Four closeout victory over the Miami Heat, Lopez went 11-15 from the floor, with all of those shots coming inside the arc. It was a stark departure from the 3-and-post-D identity he’s leaned into as a Buck. But Lopez has proven his low-post offensive skills are still buried somewhere in his seven-foot frame, and they might make another appearance vs. Brooklyn.

It should seem obvious why. With the exception of DeAndre Jordan, there is no Net with the size to fully matchup with Lopez on the block. And certainly none with experience defending the tote bag of spins, half-spins, and baby hooks Lopez can reach into. His scoring ability may be a vital counter to Brooklyn’s switch-heavy scheme. The idea of Lopez getting to take, say, Joe Harris down the block and have his way is certainly an uncomfortable thought for Brooklyn.

In that Game Four in Miami, we saw the benefits and drawbacks of turning Lopez into his old self, if just for possessions at a time. He drew, by my count, a whopping five fouls, just by attempting to post-up and receive entry passes over mismatches he drew down low:

A play like that, with Duncan Robinson draped over Lopez’ shoulder, isn’t hard to imagine unfolding vs. Brooklyn. Forget defending him 1-on-1, just moving him out of the lane is a superhuman task to ask of Brooklyn’s smaller guards. There’s also the matter of the glass, and the Nets’ struggles in that area don’t need any more discussing. Even if Milwaukee doesn’t get Lopez the ball with a size advantage down low, he’ll still have that size advantage tracking shots off the rim. The Bucks are just a bigger, stronger team than the Nets. And sending Lopez down to the block ensures Brooklyn will feel their size disadvantage, whether he gets the initial touch or not.

However, deploying Lopez as a traditional post weapon isn’t a flawless proposition for the Bucks. By taking up space down low, he eliminates, or at least clogs some driving lanes that would otherwise be harder for the defense to send help to:

Now, this might be an issue for Milwaukee even if he’s standing behind the arc. Despite his three-point stroke, he’s still a pressure point that defenses can help off of. At least, they can help off him more liberally than a Pat Connaughton, or even a PJ Tucker. And when Giannis is barreling towards the rim, the Nets will need to siphon as many helpers as they can. Death by Brook Lopez post-ups is certainly not what many expect this Nets superteam to succumb to. And it’d be excruciating to watch Lopez bully his way into 25 and 12, full of free throws and baby hooks. But boy would it be poetic.