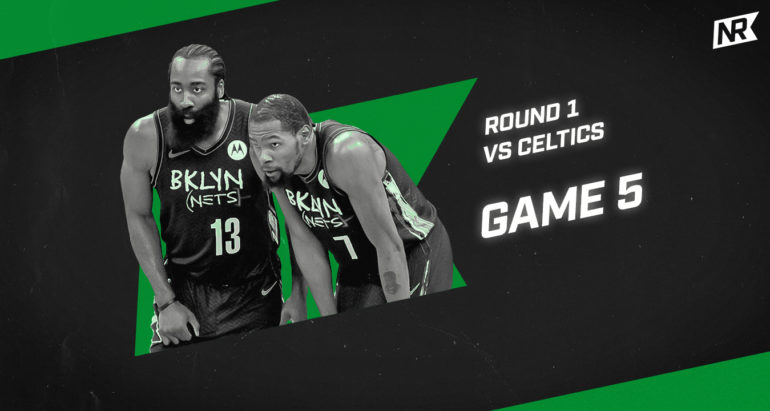 With a 123-109 final score, the Brooklyn Nets put the final nail in the coffin of the Boston Celtics on Tuesday night and advanced to play the third-seeded Milwaukee Bucks in the second round of the NBA Playoffs. With one series down, the road to a first Larry O’Brien Trophy only gets tougher from here on out.

Of course, this series-clinching win and the four games that preceded it have told us a great deal about this squad. As such, here are three takeaways from yesterday’s win over the Celtics.

Related: Takeaways from the Game 4 win.

The Brooklyn Nets move past the lesser Celtics

Despite some bumps in the road including a frustrating game three loss, the Brooklyn Nets have checked the first postseason box in their attempt at a championship run.

While a win is a win and a 4-1 series victory is plenty convincing, it must be said that the Boston squad that Brooklyn beat was severely undermanned. The absences of Jaylen Brown, Kemba Walker, and Robert Williams afforded the Nets some significant breathing room in this series as they were able to start slow or go cold for long stretches of time while knowing they could make up for it in one big burst.

Brooklyn won’t have that same luxury moving forward. Nevertheless, the Nets did what needed to be done in the first round.

Since Sean Marks pulled the trigger on the blockbuster James Harden trade all of Brooklyn has had its eyes on one thing: the NBA Playoffs. With this trio of superstars, a playoff series alone was a tantalizing prospect for even the most casual of fans.

Now, with one successful series in the books, the Nets are living up to the hype surrounding a postseason squad led by the three-headed isolation monster that is Kyrie Irving, James Harden, and Kevin Durant. As a trio, the three averaged a combined 85.2 points per game in this series as they carried their supporting cast that — frankly — underperformed a bit.

All in all, though, seeing these three guys on the floor together has been a welcome relief compared to the regular season when one or more of the three of them always seemed to be out with an injury.

At this point, we’ve seen what the big three can do at the peak of their powers. They’re capable of producing the offensive explosions that characterized this series and seem to have found their groove playing alongside one another.

With Jeff Green’s extended absence due to plantar fasciitis, the frontcourt rotation this series was a bit out of whack. The heavy reliance on Blake Griffin with the starters wasn’t always pretty, and while Nic Claxton has been solid off the bench, there are no doubt concerns heading into a series with Milwaukee.

Of note, the defensive rebounding problems from games three and four persisted to a certain extent in game five as Tristan Thompson continued to bully Brooklyn’s big men on the offensive boards.

With Green’s return to play still up in the air, it’s worth wondering whether Deandre Jordan — who is still yet to make his debut in the playoffs this season — should’ve seen some opportunities in this series. He was the primary matchup for Giannis Antetokounmpo in the teams’ contests this season as his size and strength allowed Brooklyn to match the two-time MVP’s physicality on the interior.

Of course, making up for Green’s offensive contributions along with his defensive versatility is nearly impossible with this roster makeup. As Lucas Kaplan detailed in his piece analyzing how the Nets move forward without Green, there’s no replacing Green’s offensive efficiency as a scorer.

Yet, Steve Nash and his staff can’t afford to settle for what they get from the frontcourt in this series. Further experimentation with lineups is necessary as, while the big three and Joe Harris are likely set in their roles, it’s still yet to be determined which guy best fills that fifth spot. Matchups will no doubt dictate some of that, but accepting the type of performances Brooklyn’s frontcourt put out this series against far lesser competition than what is coming the Nets’ way would be ill-advised.