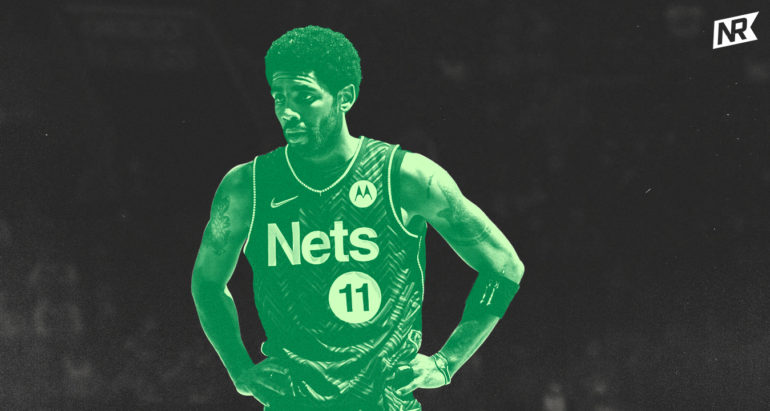 With the NBA playoffs in full swing, players and fans have activated their “playoff modes” and are locked into the first postseason since the NBA Bubble. That bubble was filled with support for Black lives and the denouncing of police brutality after the disheartening deaths of Breonna Taylor and George Floyd. The same bubble in which Nets guard Kyrie Irving was called a “disruptor” for just wanting to make sure the resumption of basketball didn’t take away from the attention of what was happening in the country. Well, Irving seems to have caused some more strife amongst people but this time it’s a group that’s all too familiar with him.

Following Brooklyn’s dominating Game 2 win over the Celtics this past Tuesday, Irving was fulfilling his postgame obligations by speaking with the media. When asked about his return to Boston, Irving mentioned how it wasn’t his first time being an opponent in Boston but added “hopefully we can keep it strictly basketball…there’s no belligerence or racism going on”.

This quote, which seems simple enough to digest, was taken and twisted to make it seem as if Irving was afraid of being booed in his first return to TD Garden with fans in attendance. It then branched into a larger discussion about racism. Since joining the Nets during free agency in 2019, Irving has only been back to Boston once which was for Brooklyn’s Christmas Day victory over the Celtics. Obviously, Irving expects to be booed. He went back on his word to fans about staying a Celtic and quote unquote “quit” on the team during the playoffs against Milwaukee. But taking the standpoint that Kyrie Irving just didn’t want to get booed seems like quite the hoop to jump through and a clear disregard of his main point.

His comments weren’t from a place of just being worried opposing fans would heckle him but from a place that far too many black athletes have either faced or seen others facing when in the crosshairs of “passionate” fans.

Boston has had a rather rocky relationship when the matters of race and sports are the topic. There’s something to be said that Irving didn’t feel the need to make this request, if you will, for fans to not shout racial obscenities when he returned to Cleveland for his first game with the Celtics after asking to be traded. Yes, this country has an awful history of racism and if you dig deep enough you can find some truly awful things that have happened and continue to happen in just about every city or town. Let me be perfectly clear, Boston is not the only guilty party. The most progressive cities have their share of bad laundry. However, there tend to be quite a few documented accounts from athletes experiencing racist incidents in Boston.

“I think that we take those kind of things seriously. I never heard any of that, from any player that I’ve ever played with in my 26 years in Boston. I never heard that before from Kyrie, and I talked to him quite a bit. So, I don’t know. As far as I’m concerned, it doesn’t matter. We’re just playing basketball. Players can say what they want”

This quote shows a clear dismissal of not only Kyrie Irving’s point but a clear dismissal of black player’s experiences whether on the Celtics or playing against them. It’s also interesting how Ainge can take this stance when members of his own organization were subject to racism during their Celtics tenure. When asked if he had any experiences with racial slurs, current Celtics guard Marcus Smart said “Yeah, I’ve heard it. I’ve heard a couple of things. It’s hard to hear that and then have them support us as players. It’s kind of sad and sickening.” Smart also has a piece in The Players’ Tribune detailing experiences he has had with racism not only at the hands of police but from a Celtics fan. Celtics center Tristan Thompson also confirmed he has been on the receiving end of racist comments by Celtics fans but not since he joined the team. Nets guard Bruce Brown, a native of the Boston area shared his accounts of racism suffered while he was a young man prior to Game 3 as well. And of course, we can’t forget how Celtics legend Bill Russell was infamously treated.

This isn’t solely a basketball issue either. MLB players such as Torii Hunter and Adam Jones have been on record talking about racist slurs and other profane statements hurled at them from the stands of Fenway Park. Hunter himself even said he never wanted to play for the Red Sox due to the racial epithets that were showered upon him when he played as an opponent.

The true problem Kyrie Irving’s comments revealed was the lack of accountability from a group of people who have not been the most accountable over the course of history. It’s very telling that many fans and media members were quick to jump on the defensive instead of addressing that there is a problem. Then came the surfacing of quotes Irving made back in 2019 in which he said he hadn’t experienced racism while in Boston. This in the aftermath of then Golden State Warriors center Demarcus Cousins having an incident with a Boston fan regarding a racial comment.

As if things can’t change within the course of two years. Heck, the entire world changed in just a year. Not to mention at the time of the quote Irving was a member of the Celtics before the rather nasty divorce. And as the past two years have shown, Celtics fans did not take the separation well. It seems ignorant to think that Irving wouldn’t be a little concerned about things getting racial given the recent history. As much as athletes say they don’t pay attention to what people are saying, the word always gets around.

Rounding out the lack of accountability was the bouts of “whataboutism” by bringing up how other cities and team fans are racist. The problem with that is that we already know these things and have called them out for it. Most notably the area that gets targeted for this is Utah who has had a slew of incidents involving black athletes. Even just recently fans were kicked out of Game 2 of the Jazz-Grizzlies series due to hurling racial and inappropriate comments toward family members of Grizzlies guard Ja Morant.

Every fanbase has its share of bad seeds. Some more than others. But how many seeds have to be planted before they overwhelm the garden? If a black athlete is bringing up racial concerns they aren’t blowing smoke. Instead of dismissing it or trying to shift blame, just listen, and understand why they’re bringing it to attention.

And you know, things almost went relatively smoothly for Kyrie Irving and the Nets over the course of both games in Boston. Or at least “strictly basketball”. Game Three saw Irving showered with boos and chants as was to be expected. There was also the instance in which fans at a Boston Red Sox game were chanting “F*** Kyrie” over the course of the baseball game. Chants like this are something we’ve seen before from the so-called die-heart fans before but it doesn’t necessarily make it right. The most recent example was Yankees fans performing that same chant to Houston Astros player Jose Altuve. The same thing happened prior to Game 4 when a chorus of “F*** Kyrie” chants again rang through the hallowed rafters of TD Garden.

Following Brooklyn’s win in Game Four, two things happened, the result of which proved Irving right in his concerns. One was a fan throwing a water bottle towards Irving as the players were leaving the court. The other was a viral video of Kyrie Irving stepping on the Celtics logo at mid-court.

The truly disturbing part of both instances is that many among Boston fans and media have sort of grouped those two things in the same category of “classless”. The fan that threw the water bottle, a 21-year old white kid in a Kevin Garnett jersey, was quickly identified by police, arrested, and later charged. But to even associate or justify that fan’s actions with Irving “disrespecting” the logo is dumbfounding.

Subtle racism is a very hard thing to recognize for people who don’t come face to face with it every day. In sports, it’s as simple as how certain players are considered passionate leaders while others are considered divas for acting the exact same way. The “subtle racism” that Kyrie spoke about in his presser last week was exactly what was on display by the reaction people had with him stepping on the logo. Do you think if Gordon Hayward, a player whose tenure also didn’t go over well in Boston, did what Irving did he’d be attacked or scrutinized in a similar fashion? Yes, team logos are sacred to players and fans. We saw what happened years ago when Terrell Owens “disrespected” the Cowboys Star at midfield. But at the end of the day, it’s a logo. A logo on hardwood that Kyrie Irving and about 20 other players had just finished running up and down on for the 48 minutes of gameplay.

Having more to say about Kyrie Irving’s actions than the fan who threw the water bottle at him, or the countless other incidents that have happened since fans have been allowed back in arenas is very telling. You have no problem with thousands of people chanting obscenities toward an athlete, but that same athlete stepping on the logo (an inanimate object btw) is where you draw the line? By even doing this you are dehumanizing Irving and putting him on the same level as a fictional character. It doesn’t matter how hurt you were or still are by his departure from Boston. At the end of the day, it’s just sports, not life or death. If you feel more anger toward Irving than the person who literally threw an object at him then you need to take a look in the mirror and re-evaluate.

In Irving’s Game Four press conference, he likened the ongoing situations happening around the league to being in a “human zoo”. He also added the presence of “underlying racism” which he is 100 percent correct about but that’s a whole topic for a different day. Teammate Kevin Durant said fans need to “grow up” when asked about the incident as well.

No matter how you try and rationalize it tossing popcorn or spitting at athletes is not “just a part of the game”. They are more than just entities designed to entertain you. They are human beings with human emotions and deserve to be treated as such. Going to sporting events is a privilege, not a right. Purchasing a ticket to a game, no matter the sport doesn’t give one the right to do or say whatever they please to the athletes giving their all. But all the bad behavior is hidden under the veil of fandom. The false claim that people aren’t bad, just passionate about their team. But in reality, this is who they are. Like Twitter trolls perusing comments sections with no profile picture, they’re secure in saying whatever they please because they feel safe from actual consequences. About 99% percent of people that scream obscenities and slurs at players wouldn’t do it if that player was standing right in front of them.

And it’s no coincidence that all the incidents that have happened so far these playoffs have involved black players and white fans. After a summer of protesting and black athletes speaking out on issues, it is saddening but not surprising that a simple request for no racism at a sporting event could be met with such pushback. Especially when the concerns expressed were justified by the actions that followed.

Brooklyn Nets: Takeaways From a Crushing Game 7 Loss to Bucks