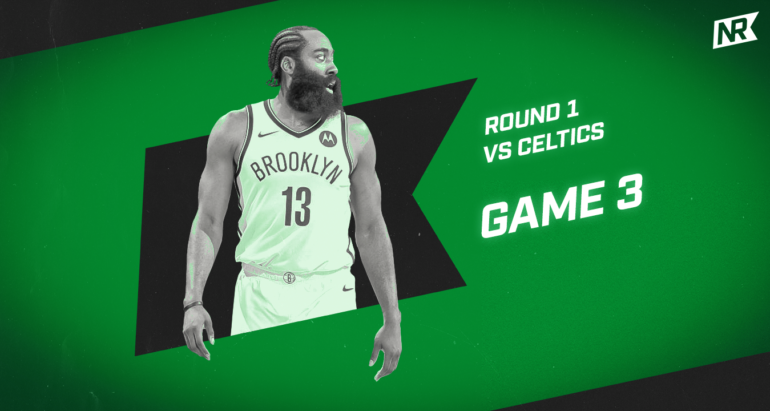 Well, it looks as though the collision course between the Brooklyn Nets and Milwaukee Bucks will have to wait a bit.

After steamrolling the Celtics in Game Two, Brooklyn entered Saturday’s contest looking to put a stranglehold on the series. For the first four minutes of the game, that looked possible. The Nets began Game Three on a 19-4 run, quieting a small but boisterous Boston crowd.

The Nets may have thought they delivered an early knockout blow, but the resilient Celtics squad would not be put away so easily. After ending the first quarter on a 10-0 run, the Celtics took the lead and only briefly relinquished it in the second half. Boston held Brooklyn at bay all game, spearheaded by budding superstar Jayson Tatum. The former Duke Blue Devil put on a show for the ages in the third quarter en route to a 50-point performance. Boston also received key contributions from Marcus Smart and Evan Fournier.

Here are three takeaways from a rather frustrating 125-119 Game Three loss:

Since making his postgame comments about racism in Boston after Game Two, Kyrie Irving had an even bigger spotlight on him entering Game Three. And as expected, when he walked onto the court during player introductions, a chorus of boos greeted him. Obviously, Irving is no stranger to being in hostile environments, so it would not be fair to him to say he was affected by the booing. However, objectively speaking, he was flat-out porous this game.

Irving started the game missing his first few shots, but seemingly appeared disengaged from the offense in the first half. At stretches you forgot he was even on the floor, ending the first half with only two points on 1-of-5 shooting. He picked it up in the second half, connecting on a few threes and mid-range jumpers. However, he did not seem like his usual dominant self. Boston’s trapping had Irving uncomfortable all night. At times, he was too unselfish; at others, he completely halted the flow of the offense to go iso ball. In 41 minutes of gameplay, Irving finished with just 16 points on 6-17 shooting.

For someone who has produced some epic playoff performances, this game was an anomaly, so Nets fans shouldn’t worry too much. With 17,000 fans expected to be in attendance for Game Four, expect Irving to have a classic bounce-back game.

Tatum and the Curious Case of Switching

It’s no secret the Nets, much like many other teams in the league, employ a “switch everything” defensive scheme. This can be a successful strategy at times, but sometimes, it can be used against you. That’s exactly what Jayson Tatum did against Brooklyn, dropping a smooth 50 points on 16-of-30 shooting. It didn’t even matter who stepped up to take on the Tatum challenge, either, as he was locked in. His dominance really showed itself in the second half, specifically in the third quarter where he dropped 19 of his 50 points.

All game, Boston’s thinking was simple: whenever Kevin Durant matched up with Tatum, get him to switch off. For the majority of the series, Durant has been the person who’s given Tatum the most fits. Knowing this, Boston wanted any chance to get Durant off him. Boston sent Tatum as the screener, thus getting the advantage he wanted. Tatum especially abused Irving and Nicolas Claxton when they matched up against him. It got to the point where it was predictable what Boston would do when they came down on offense, yet it didn’t matter. The Nets offered the switch and Tatum and the Celtics gladly accepted it.

It’s clear the Nets cannot afford to have Tatum going off like this again, so expect a little less switching come Game Four. This is also where the loss of Jeff Green rears its ugly head, as his size and versatility on defense would’ve certainly helped in quelling Tatum’s offensive explosion.

Rotations Continue to Befuddle and Confuse

Something that has nipped Brooklyn in the bud many times this season has been the head-scratching rotation moves by head coach Steve Nash. Green’s absence for the series throws a pretty significant monkey wrench into what lineups Nash will run out there; his size and shooting ability have made him a valuable asset.

The absence of Green saw more minutes for Claxton in Game Three. However, it did not go as many had hoped. Claxton looked uncomfortable from the minute he checked in. He was clearly outmuscled on the interior by Tristan Thompson and found himself in post-up situations which resulted in either a contested shot or a turnover. Even on defense, Claxton struggled—one might have thought peak Hakeem was out there the way Claxton he was jumping and biting on head fakes. Over the course of his eight minutes of game time in the first half, Claxton had a plus-minus of -15.

Claxton wasn’t the only rotational piece that performed poorly. Blake Griffin, who hasn’t had the greatest series, was not particularly good this game either. He was essentially a ghost on the offensive end. On the defensive end, he made Tristan Thompson look like prime Shaq with the number of offensive boards Thompson gobbled up.

With how much the Nets frontcourt struggled in Game Three, it was a little puzzling as to why Nash didn’t try other looks to try and slow down Thompson on the boards. Although there are the warranted concerns with DeAndre Jordan, there’s no denying he has the physicality to bang with Thompson. Or perhaps Alize Johnson deserves more attention. As we’ve seen, Johnson is not afraid to get physical and throw his body around. The Nets also could’ve gone for more minutes with Durant at the 5 to help spread the floor on offense. Whatever the adjustment for Game Four will be, priority number one has to be figuring out who will give the best minutes at the center position.

The Nets reverted back into isolation ball in this game, which got them in trouble for a good deal of Game One. Brooklyn went into multiple stretches throughout the game where it just cleared one side of the floor and had someone operate, or dumped it down low for an ill-advised post-up. This was especially noticeable in the first quarter when the Celtics clawed back from their early 15-point deficit. The Nets went away from the thing that got them lead, which was ball movement and dribble-drive penetration. Although Brooklyn got 39- and 41-point performances from Durant and Harden respectively, they have to get back to what made them so successful in Game Two.

Next up: Game Four is in Boston once again, as Brooklyn looks to bounce back and regain control of the series (Sunday at 7 p.m. ET, TNT).