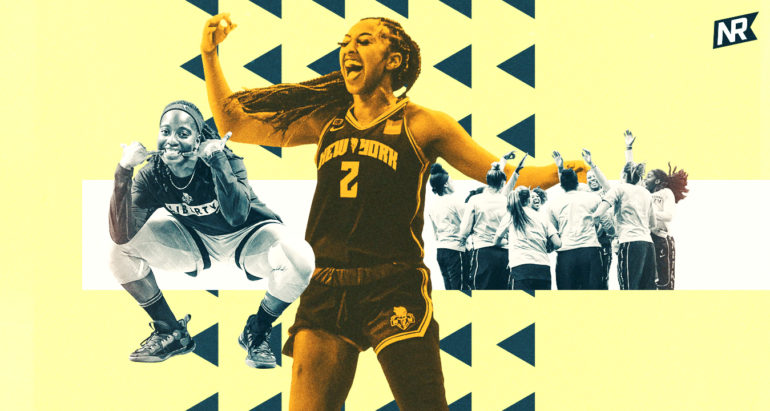 Time on the bench has not been a break for Jazmine Jones and DiDi Richards, the New York Liberty’s primary power generators.

Jazmine Jones has developed quite a skillset over her first two years of WNBA experience. She flourished in a point guard role she hadn’t held since her high school days at Florida A&M’s Developmental Research School, ranking at or near the top of several major categories amongst freshmen in the Bradenton bubble.

While creating a more permanent home in Brooklyn, Jones has added a new skill to her hardwood arsenal: improv.

Meeting with reporters as the Liberty ahead of the team’s game in Phoenix this past Sunday, Jones detailed the origin of the pregame handshakes that send those clad in seafoam into action on game day. Now an established leader on the Liberty’s second unit, Jones will often give the opening five one last boost of adrenaline before tip-off. As the starting five is introduced, Jones engages in a brief flash of energy as each representative is introduced, a coordinated handshake at the ready for each player.

Considering the flawlessness of each send-off, one would believe that each stunt was carefully planned and choreographed, planned during the doldrums of training camp. But, according to Jones, there was no preseason practice when it came to the pregame antics. Jones had no idea she’d be the final source of confidence before tip-off until mere minutes stood between the Liberty and their opening day matchup with the Indiana Fever on May 14.

“I legit came up with the handshakes, right on the spot with everybody,” Jones told the Liberty beat on Friday, regarding the origin of her pregame joy. Even though only six players have appeared in the opening five through nine games, Jones claims she now has displays ready for every player on the team. Even when Natasha Howard joined the team late and appeared in two games prior to suffering an injury, she and Jones worked up a celebration shortly before a victorious tilt against Chicago.

“When Tash played her first game, when she started, we came up with a handshake, just like that,” Jones said. “It’s cool to get my teammates pumped up before they go out there and start the game off for us. I’m just trying to be a great teammate.”

Jones’ duties obviously aren’t aren’t over once the clock starts its countdown. Ionescu has resumed the point guard duties, but Jones continues to make an impact off the bench…even when she’s not on the court.

Teaming up with rookie DiDi Richards, Jones has created an aura of energy on the New York bench that hasn’t been seen since the final days of the Liberty’s Madison Square Garden era. Even when they’re not on the floor, the pair has made their presence felt through comical, yet inspiring, celebrations. Major New York baskets are commemorated by Jones and Richards’ antics, whether it’s a trust fall, a wheels on the bus endeavor reminiscent of a false start at MetLife Stadium, or simply genuine jubilation.

If Jones and Richards can’t be on the floor to contribute to the Liberty’s ongoing success, they’re doing all they can to keep the good vibes going on the side.

“It’s about me being on the sidelines, trying to keep everybody pumped up, keep the crowd into it, just having some fun, really, on the sideline,” Jones said of the sideline showcase, mentioning that the return to home arenas has only boosted her already-perpetual energy that usually manifests in the form of dance. “My energy has always been the same. I’ve had this energy since I was a little kid…you want to be that teammate that everybody knows that they lean on and know that, ‘Jaz is going to have good energy every single day so if I’m down today, I know Jazmine can bring me up…I’m just trying to be that be that light.

Pairing the endless energy of Jones with the second-round pick of Richards was almost a no-brainer. Already renowned for her comeback story last season at Baylor, Richards is a perfect mix of inspiration and comedy. Combining it with Jones has created an energy source that could cover both Brooklyn and Tribeca.

“I think if you ask anybody on the team, I wake up with this much energy. If we have a flight at 6 a.m., I’m going to be yelling on the airplane,” Richards said. “I was a little nervous, I don’t want to come off as too goofy. But it’s really not me being goofy, it’s me having fun and being excited for the teammate in front of me.”

“I think that’s what this team has that a lot of teams kind of miss: we’re excited to see each other succeed regardless if it’s us or them, so it’s just being able to put the team first and (ourselves) second.”

Jones and Richards may be the star attractions but their teammates don’t hesitate to get in the action as well. Even injured players like Howard and Jocelyn Willoughby have participated, at least as far as their ailments will allow them.

The sparks that light Jones and Richards’ respective fires—a.k.a. the staples of the New York starting five—have expressed their appreciation for what the pair and their comrades are trying to do. Another rookie, Michaela Onyenwere, is the star of one of Jones’ most elaborate introductions. As Onyenwere’s name is read aloud, Jones snaps photos with an imaginary camera as the UCLA alumna strikes model-esque poses before heading into battle.

“I love the energy off the bench,” Onyenwere said. “One thing about our team is that we have such great team chemistry in such a short time and we built that on the court and off the court. Every single day, people show up just consistent with a lot of energy and that’s never something we have to worry about and so it’s easy to go out and compete with people who are like that.”

As the New York redemption tour continues, it’s quite possible that Jones and Richards’ celebrations could become more elaborate, more joyful as the games’ stakes rise. A four-game west coast swing, which began on Sunday with a win in Phoenix, might require a few extra jolts.

According to Jones, however, the sideline joy isn’t meant to be a momentum-changer (though the Liberty would obviously love to reap such a benefit). Viral views and clicks mean nothing in the grand scheme of things. Instead, Jones is proud and pleased to grow the sense of strong camaraderie and unity that has been built with an almost entirely new lineup in such a short amount of time.

“We love each other,” Jones said. “Like we genuinely, genuinely like each other on and off the court and we have a good time with each other.”