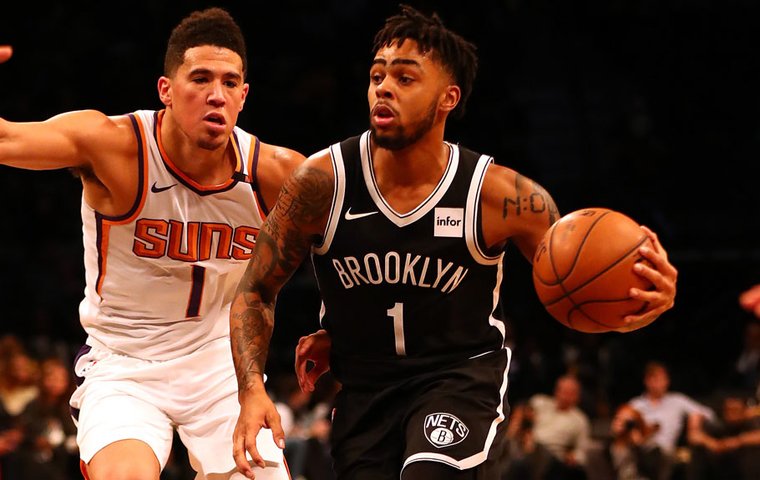 Well, a nightmare on Flatbush Avenue actually happened on Tuesday night — the Brooklyn Nets fell to the Phoenix Suns, 122-114. The game was not pretty for the Nets for much of the first half, though a second half spurt ended up being overshadowed by a Suns spark of their own. It was the “game of runs,” so to speak. Yep, to cap October off, with this loss, Brooklyn unfortunately brings its losing streak to three and drops to 3-5.

It does not get any easier from here; in fact, the real Halloween spook is just how frightening the Nets’ November schedule looks. There were a fair share of spooky things that occurred on Tuesday, though.

The two teams’ young stars lit up the court and were the leading scorers for their respective teams. Devin Booker, who just turned 21 the prior day (and perhaps celebrated with D’Angelo Russell), finished with 32 points, seven rebounds and four assists. Russell had just one more point and high totals of his own — 33 points, six rebounds and four assists. Remember: both players were in the same draft class, which would explain their close bond, and only adds to the exciting storyline of how they perform when playing against each other. Booker’s team came out on top in this one, though.

As a team, the Nets have clearly been subpar at containing their opponents. Through only eight games, Brooklyn has allowed opposing teams to score 120+ five times, and four of them have resulted in losses. At some point, it would be fair to say enough is enough, and the earlier, the better. Imagine watching the Nets do this on a regular basis for an entire 82-game season? That would be absolutely dreadful.

The pace was absolutely unbelievable in the first quarter, with neither team really giving one another a hard time. Things only got worse for Brooklyn when the Suns were able to can their shots (really, for much of three quarters, they were outstanding), while the Nets missed on shots like easy layups and short pull-ups.

“The Mayor” shows up once again

Spencer Dinwiddie saved the Nets against the Cleveland Cavaliers in crunch time. Though not in crunch time this time around on Halloween, he could have been marked as the hero for sure, if Brooklyn came out on top.

The impact Dinwiddie made after checking into the game in the third was felt almost immediately. With 5:04 remaining in the period, the Nets trailed 83-68, and the night was looking pretty grim for them. Dinwiddie propelled the team on a major comeback, that if not for the Nets’ fourth quarter meltdown, would have definitely been recognized as the game-changing event that led to a win. Of course, with how it transpired, it was unequivocally a game-changing event for Brooklyn; it just did not last, due to new struggles that emerged in the final 12 minutes.

Whether it was making plays or knocking down shots of his own, the last five minutes of the third were truly magical (for holiday-themed purposes, we could also say spooky) for “The Mayor.” Dinwiddie notched two assists in these five minutes, including one that led to an open Allen Crabbe, who drained a triple. (Crabbe also appeared to be heating up in the third, with his only two field goals of the game coming in that quarter.) “The Mayor” also scored eight points in the third, the most notorious of them being two back-to-back three balls that first tied the game at 85, then gave Brooklyn an 88-85 lead.

Questions about lineups on the court

A popular narrative coming into this game already was whether D’Angelo Russell should continue to handle point guard duties. Of course, this was only considered even more after the Nets’ loss, with Dinwiddie’s superb action, and head coach Kenny Atkinson’s apparent hesitance to have both players on the floor at the same time.

On Episode 15 of the Brooklyn Revolution Podcast, I had considered Brooklyn replacing Russell in the starting lineup with Dinwiddie. The idea I did not explore (though I find intriguing and only realized during the fourth quarter on Tuesday) is both players sharing the backcourt together. My immediate assumption was that if Dinwiddie’s starting role was to come to fruition, Russell would be reduced to a reserve role. That may not necessarily be the case though, since it is unclear whether Caris LeVert‘s starting gig is 100 percent secured.

Given the fact that the Nets’ plan entering the season was to start Russell at shooting guard with Jeremy Lin at the point, it would only make sense for Brooklyn to try out something similar to that effect. Except this time, it would be with Dinwiddie and Russell playing together. That is a lot easier said than done though, with the team not possessing much depth at the 1. It is an overstated fact that Dinwiddie is the only “pure” point guard on the roster aside from Lin. Brooklyn would probably have to explore a lot of “combo” rotations to make this work.

Do not forget that we are only eight games into the season. The team, overall, still has to learn from its mistakes (a lot on the defensive end), and the Nets were recently battered with more injuries to Quincy Acy and Jarrett Allen. It is clear the Nets’ rotations are still a work in progress. After all, Tyler Zeller received 19 minutes of action on Tuesday as well.