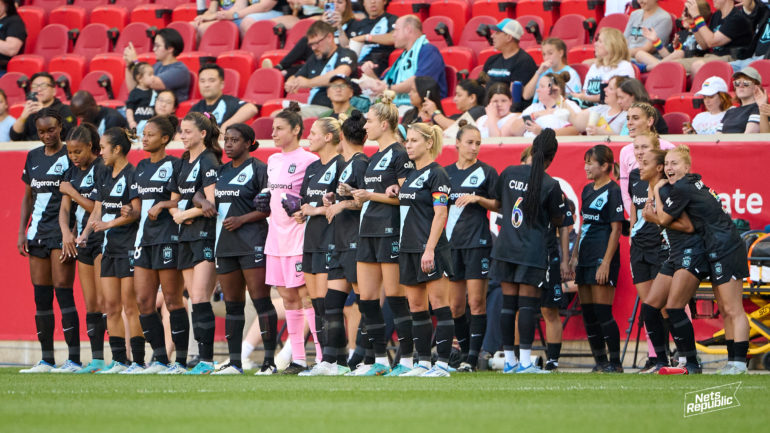 It was a night to celebrate Pride – but NJ/NY Gotham FC would give fans something else to be proud of. On Saturday night, during the club’s annual Pride Night celebration, Gotham secured a 1-0 win against defending NWSL champions the Washington Spirit – and they did it with style.

The score might have only been 1 – 0, but Gotham showed more prowess in the attack this game than in any game so far this year. With 14 total shots and 5 on target, the team exceed 1 xG for the first time all season.

The game’s only goal came from Margaret Purce in the 21st minute. Paige Monaghan threaded an expertly timed pass down the left side to Ifeoma Onumonu, who shook two defenders and dribbled her way into the box. Onumonu crossed the ball on the ground just past Spirit goalkeeper Aubrey Kingsbury’s outstretched hand, and Purce slotted the ball home.

The first half of the game was filled with renewed energy from Gotham and a relentless attack. The Spirit did everything they could to keep the scoreline 1-0 and almost capitalized off a rare mistake from the home side just before the end of the half, which allowed Ashley Hatch to make a solo run on goal. Gotham goalkeeper Michelle Betos made an incredible save to keep the ball out of the net and secure the lead going into halftime.

In the second half, Gotham maintained a steady rhythm, and although they were less dangerous on the attack, they managed the game with expertise, seeing out the 1-0 scoreline and taking all three points. Gotham now sits in 5th place in the NWSL standings with two games in hand.

After the game, coach Scott Parkinson acknowledged that the team’s win last week on the road against Angel City FC provided a spark for the club who had come off of two prior losses.

“I think we all know we’ve probably not looked ourselves, but we know that we will look ourselves. Sometimes it just takes time and pain and losses and poor performances,” Parkinson said. “Sometimes the pieces have just got to fall into place. We’ve got to get comfortable. We’ve got to keep working out what we’re good at, but I do think you can see a little bit of momentum in the team. I saw a stat yesterday that we’ve actually given up the least goals in the league, not from penalties. We’re not a million miles away, and we’ve got work to do, but I do think that the momentum is rolling.”

Saturday’s game at Red Bull Arena also hit their highest attendance so far for a home match with 6,443. For Purce, seeing the fans filling the stadium is just as important to their success on the field.

“It’s just a great vision. Everyone was so happy to be there and it helps. It’s definitely the 12th man on the field,” Purce said. “I’m just grateful that the younger players on my team get a chance to play in front of [a crowd like] that. It’s something I wish every player got to feel all the time. So we hope everyone comes back!”

Even with the excitement of the win and the energy of the crowd, the players did not forget that Saturday night’s Pride Night match was about so much more than just soccer. Defender Imani Dorsey, an ambassador for Athlete Ally, spoke about the importance of the team hosting their annual Pride Night.

“I’m so grateful to be a part of this club because I feel like something that we really work to embrace is diversity. We were talking today about how special pride is but also how pride began as a protest. I think it’s something important to recognize that it’s sad that we have to create space to celebrate marginalized communities, but the fact that we do it consistently now is so important, so special, and I’m grateful to be a part of it and try to use my voice with my teammates,” Dorsey said. “Especially when it comes to the climate of our world right now in terms of a lot of the terrible legislation that’s been attacking trans youth and LGBTQ youth, it’s really important that we speak up and show our fans in this community that you’re welcome here as you are no matter what.

Gotham FC’s official supporters’ group Cloud 9 wowed the crowd with an incredible tifo depicting the images of Marsha B. Johnson and Sylvia Rivera – two pioneers of the early fight for LGBTQIA+ rights and prominent figures in the Stonewall Uprisings.

The quote on the tifo, “we have to be visible,” is part of a larger quote from Sylvia Rivera.

We have to be visible. We should not be ashamed of who we are. We have to show the world that we’re numerous. There are many of us out there.

The idea for their Pride Night tifo came about just weeks prior, during the construction of their home-opener tifo. The tifo committee, comprised of Jen Muller, Natalie Lazo, and Melissa Correa, decided that instead of just focusing on the celebratory aspect for pride, they wanted to highlight the local pioneers who were fighting for LGBTQIA+ rights in our very backyard.

“With everything that is going on, and the rise of legislation targeting trans people, we thought it was important to highlight Marsha and Sylvia,” Jen Muller, a co-leader of Cloud 9 told Nets Republic. “Not only because they are pioneers, but also because they are locals. They are New Yorkers, and Marsha actually grew up in New Jersey. We wanted to highlight them this year.”

Gotham FC will play their next match away at Kansas City on Saturday, June 11th at 8:30 PM ET. They will return to Red Bull Arena on Sunday, June 19th. For more information, visit GothamFC.com.