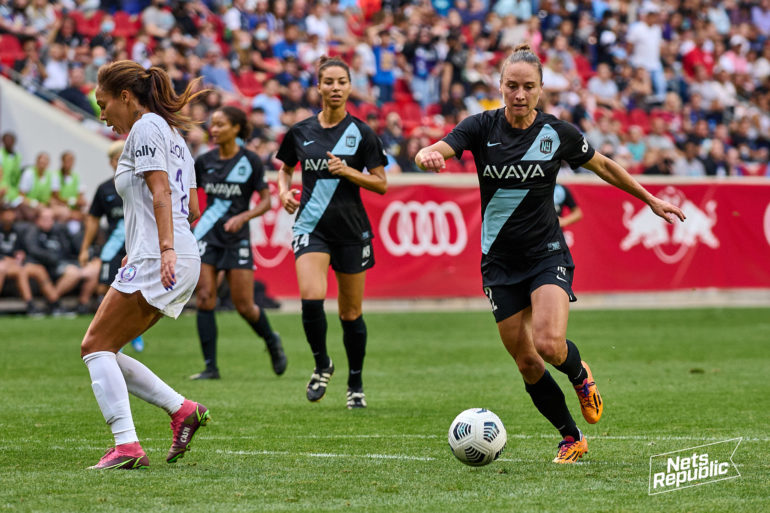 Gotham FC was content to play a minor role in Saturday’s 2022 NWSL college draft — trading out of the first round and picking up three prospects.

The club ended the evening with a goalkeeper, a center back, a midfielder, as well as $40,000 in allocation money and OL Reign’s natural first-round draft pick in 2023 in exchange for this year’s No. 8 overall pick. Head coach Scott Parkinson told reporters that trading out of this year’s first round was in anticipation of the depth that’s expected in the 2023 draft.

“We had positional needs at center back and goalkeeper,” said Parkinson. “We had to make an educated guess based on the talent in this draft — where we think they’d go and where we’d think they’d land.”

In defender Kelly Ann Livingstone (Georgetown) and keeper Hensley Hancuff (Clemson), the club will fill some of those positional needs. Midfielder Raleigh Loughman (Michigan) could offer another depth piece in the attacking midfield role behind Kristie Mewis, who Gotham traded for after last week’s expansion draft.

It’s unlikely any of these picks will play an immediate role in Gotham’s 2022 campaign, with the club’s off season business signaling it will field an experienced XI next season (particularly with the acquisition of defender Ali Krieger and Ashlyn Harris in goal). But nabbing some young players to develop in key positions was a must considering the long list of veterans on Gotham’s roster.

Here’s the break down on Gotham’s 2022 NWSL College Draft picks:

With the No. 24 pick of the draft, Gotham selected New Jersey native Kelly Ann Livingstone. From Glen Ridge, the center back already has strong ties to the club after playing with the Gotham Reserves under the senior team’s assistant coach Becki Tweed. The team came out on top of their conference in the WPSL during the 2021 season, winning all nine of their games.

At Georgetown University, Livingstone had an exemplary 2020 in which she was named to the All-Big East’s First Team, awarded Big East Defensive Player of the Year, and named a United Soccer Coaches All-American. As a bonus, she recorded three goals and one assist in her senior season.

During the draft broadcast, analyst and former USWNT midfielder Lori Lindsey compared Livingstone to the current USWNT captain, calling her “Becky Sauerbrunn-esque” — which might just be the highest praise an American defender can receive. Learning from the veteran center backs on Gotham’s roster could surely help Livingstone reach her potential, and groom her to be a potential starter in the future.

In the third round of the draft, Gotham picked up Hensley Hancuff out of Clemson University. Originally from Oklahoma, the 6’3” keeper spent the first two years of her collegiate career at Villanova University where she earned a spot on the 2018 All-Big East Freshman Team. At Clemson, she had a stellar junior year helping the Tigers in the run to the Elite Eight during the NCAA tournament.

Hancuff is now the second keeper the club has drafted from Clemson — following in the footsteps of Gotham’s former No.1 Kailen Sheridan, who was picked up by then-Sky Blue FC in 2017.

When Hancuff reports to Gotham, it will be a reunion of sorts as she previously trained with Ashlyn Harris at the Orlando Pride before starting her college career.

With their final pick of the draft, Gotham selected University of Michigan midfielder Raleigh Loughman. The San Diego native is coming off a hot 2021 season in which she netted nine goals (tied for a team-high) and led the Wolverines with nine assists. She was also named to the All-Big Ten First Team and was awarded the best offensive player of the Big Ten tournament (a notable accolade considering conference rivals Rutgers made it to the College Cup).

If Loughman retains her 2021 form in the pros, she could become a valuable asset for Gotham, which produced very few goals from the midfield this past season.

To see Gotham’s 2022 NWSL College Draft picks Loughman, Hancuff, and Livingstone along with the rest of Gotham FC in action next year, visit Gotham’s website for 2022 ticket information.