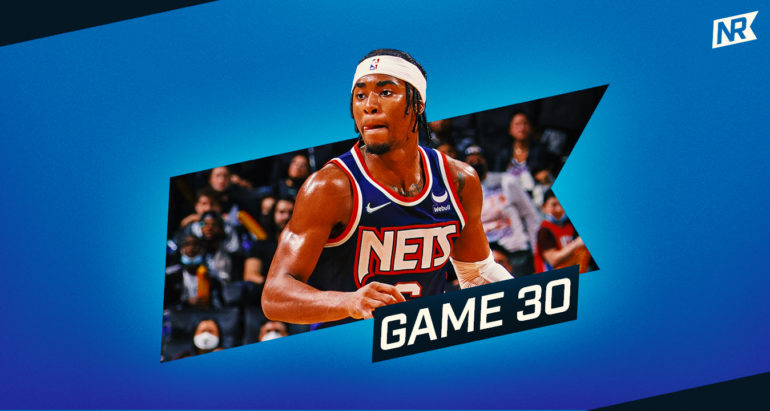 The Brooklyn Nets faced an uphill battle in Saturday night’s game. Although the opposing Orlando Magic were 5–25 heading into the matchup, the Nets had reason to assume that winning this game would be difficult. Brooklyn unfortunately had to sign hardship contract players to meet the eight-player minimum required to play this game. The Magic, sadly, had health and safety protocol issues of their own. In total, 24 players across both teams had to sit out for this game.

With Kevin Durant and James Harden on the long list of players in health and safety protocols, the Nets were bound to struggle to create offense. Kyrie Irving was also placed in health and safety protocols, after the team announced yesterday that he would play in eligible road games and ramp up his training. He would also start daily testing in the next few days. While the pending return of the Big Three is a great sign for Brooklyn’s offense in the games ahead and while Kyrie’s return for road games occupied the attention of Nets Twitter, the three superstars were far from the only Brooklyn players who could not play in this game.

Although the stars (and many of the role players) weren’t eligible for this one, there was plenty to be excited about despite being shorthanded and falling just short with the fourth quarter comeback attempt in a 100–93 loss. Some of the Nets rookies had impressive moments, and one rookie in particular starred in Brooklyn’s late push to tie the game. Here are some takeaways from this performance.

The recent absences across the roster have given rookie David Duke Jr. a chance to shine, and he certainly was a bright spot in this game. The former Providence player started, played over 35 minutes, scored 18 points, and grabbed 14 rebounds in an excellent performance. He turned it on down the stretch, putting up 16 points and 9 rebounds in the fourth quarter alone.

The Brooklyn Nets as a team, and Duke Jr. in particular, could have been forgiven for appearing overwhelmed late in this game. The double-digit third quarter deficit and depleted roster certainly made a comeback seem unlikely. However, Duke Jr. sparked a Nets run that saw them come back to tie the game. Brooklyn got as close as 93–93 before Orlando pulled away for the win. The tying basket, of course, came from David Duke Jr. on a three-pointer assisted by Cam Thomas. Brooklyn fell short of a win in this game, but other than that Duke Jr. had a fantastic night on the basketball court.

Cam Thomas Gets The Green Light

Given both Brooklyn’s injury woes and his shot creation skills, it made sense to assume that Cam Thomas would be asked to create a lot of shots in this game. The rookie did his best to keep the Nets offense going in this one, which was a rough offensive game all around for both teams. He scored 15 points on 20 shots, only canning one of his seven three-point attempts.

Despite having a poor night efficiency-wise, there were also encouraging signs from Thomas in this one. He had more opportunities to create for others than usual, and Thomas did admirably in terms of decision-making and trying to move the ball. He tied his career-high so far with four assists, including the assist to Duke Jr. for the tying triple late in the game. Thomas showed encouraging signs for his future development in this game, and his passing was especially good to see.

Kessler Edwards made his first career NBA start in this game. Unfortunately, he didn’t play as well as the other two Brooklyn Nets rookies in the starting lineup. He finished with nine points on 13 shots. Edwards also failed to knock down a three-pointer until late in the game, but that was unfortunately a theme—other than Blake Griffin, no Nets player hit a three-pointer for the first 33 minutes of this game.

Despite missing some shots in this game, there were plenty of encouraging signs for the rookie who has stood out for Long Island as well this season. His defense on the wing throughout his 39 minutes in the game was solid. This game was far from perfect for him or the team on the defensive end but Edwards generally did well; he is on his way to fulfilling his 3-and-D potential. In addition to his mostly good fundamentals, Edwards added a few highlight plays with three blocks. Much like the Brooklyn Nets team as a whole, Edwards braved the difficult circumstances of this game and put together an admirable effort that fell just short of a win.