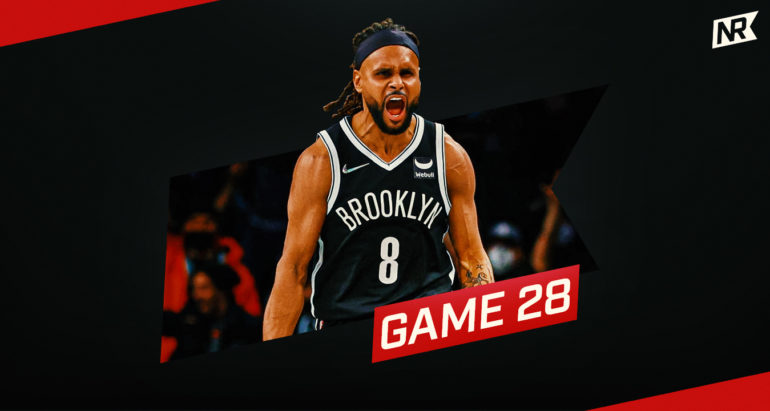 Nets vs. Raptors Recap: Brooklyn Grinds Out Overtime Win with Only Eight Players

There used to be a saying around the Brooklyn Nets. During the rebuild, the phrase “Brooklyn Grit” was coined in order to show that no matter the circumstances, the Nets would grind their way to a victory. That attitude was on full display at Tuesday night’s game against the Toronto Raptors. Heading into this game, the Nets were going to begin a five-game homestand. However, things turned for the worst when Paul Millsap, James Harden, Bruce Brown, Deandre Bembry, Lamarcus Aldridge, James Johnson, and Jevon Carter would be placed under COVID-19 health and safety protocols. To make the situation even more dire, Joe Harris was still out recovering from ankle surgery and Kyrie Irving remained unavailable. All that remained was Kevin Durant, Patty Mills, Nicolas Claxton, Blake Griffin, and the four rookies: Cam Thomas, Day’Ron Sharpe, Kessler Edwards, and David Duke Jr. The Nets could have easily punted the game and lived for another day. Instead, they took the “next man up” mentality and gutted out a competitive, fun 131–129 overtime victory. This win also cemented the best 28 game start in Nets franchise history.

The first quarter saw lots of action, with both teams scoring at will. Kevin Durant set the tone hitting his usual jumpers, but also ran facilitating duties early with four quick assists. Claxton made The Clays rock with three thunderous dunks. However, the Nets rookies, especially David Duke Jr, made their mark early. DDJ was active on the defensive end, getting steals and a block that would lead to easy transition points.

The rookies continued to make their presence known in the second quarter, leading off with Day’Ron Sharpe two quick blocks to begin with the quarter. Much of the theme of the period would be defense leading into offense, but the Raptors would stick around by hitting occasional three-pointers. The Nets held the halftime lead 66–56. The 66 points being the most points scored in a half this season for Brooklyn.

The third quarter is where things seemed to take a turn for the worst. The rookies started to show how young and raw they still were, committing several “rookie” mistakes. These mistakes would be more costly on the defensive end of the floor, as you would see blown coverages and rotations. It did not help that the Raptors got into a comfortable flow on offense and made it look like they could not miss. What was a 10 point lead for the Nets flipped into a nine point deficit, as the Raptors outscored the Nets 44–25 in the quarter

The term “Fourth Quarter Nets” should be the theme for this season. In typical fashion, the Nets kicked into a whole different gear in the fourth. Their defense put back the clamps on the Raptors for the first six minutes of the quarter. The defense, coupled with constant ball movement leading to clutch buckets from Kevin Durant, Patty Mills, and Kessler Edwards helped the team surge back into the lead with an 18–4 run. Late in the game, the stellar play of Raptors rookie Scottie barnes, as well as seasoned veterans Fred VanVleet and Gary Trent Jr., put the Raptors in front 120–117 with about 23 seconds to go. Not ever shying from the big moment, Patty Mills delivered with a clutch three to send the game into overtime.

In overtime, the Raptors raced out to an early 124–120 lead. Brooklyn responded with their own 8–0 run, spearheaded by Durant. The Nets would never relinquish that lead, holding onto the victory despite a late Fred VanVleet three, and Scottie Barnes almost banking in a shot at the buzzer.

Another ongoing theme so far this season is that whenever the Nets need a savior, Kevin Durant delivers. Tuesday night was no different with the new, out of the blue, circumstances. As the lone superstar out there, Durant continued to showcase his ability to do everything, especially with him putting up a triple double. Though the Raptors were able to play solid defense on him, Durant was still able to score when he wanted to the tune of 34 points. Durant even took on the primary facilitator role, usually done by James Harden, and dished out 11 assists. To complete the triple double, Durant grabbed 13 rebounds.

Like I said last post-game, us fans should never take any minute that Kevin Durant plays in a Nets uniform for granted. Durant is showcasing why he is the best player in the world, and it’s a special sight to see.

The scrappy win also felt like a rewind through time to the 2018–2019 season, where wins needed all hands on deck and was always a dog fight. On top of Durant’s otherworldly performance, the remaining veterans and the rookies (more on them later), chipped in tremendously in order to secure the overtime victory. The biggest contribution to note would be none other than Patty Mills. The spark plug veteran went full “Patty Melt” or “FIBA Patty” as he poured in 30 points on 50 percent shooting, including the shot to force overtime. However, what doesn’t show up on the stat sheet was his defensive play, hounding the likes of Gary Trent Jr. and Fred VanVleet. More importantly, his veteran leadership, especially during the “all rookie” lineups, would be key in making sure the team would execute on both ends of the floor.

Though still young, Nic Claxton showed veteran savviness. Finishing the night with 16 points and seven rebounds, Claxton did set the tone early with a dunk party in the first quarter. His defense was great as always this season, showing his switchability and being able to guard 1–5. Claxton’s play has steadily improved since his return from illness, and he’s continuing to prove that he can be a key piece to help Brooklyn win a championship.

With a majority of the front court rotation unavailable, the Nets turned to a former struggling rotation player. Blue Collar Boy Blake Griffin, who always said he would stay ready even if he was not in the rotation, answered the call. Though he has struggled mightily shooting from deep this season, Blake was able to hit two key three-pointers. Blake would also have vintage bully ball possessions, while at the same time being a small-ball facilitator dishing out six assists. Blake’s defense on Raptors star Pascal Siakam was terrific. Though Siakam would find ways to score, Griffin still made it hell for him.

With circumstances currently needing Griffin to play an increased amount of minutes, Nets fans can hope that this performance can be a springboard to more consistency down the line. More consistency and blue collar play from Griffin can mean more time in the rotation like the Nets saw late last season and early this season.

Even after tonight, the Nets rookies are raw and still have many areas to develop. However, Cam Thomas, Day’Ron Sharpe, Kessler Edwards, and David Duke Jr. went out and proved to many that they belong in the league and can compete with the best.  The future is bright for the Nets.

Kessler Edwards had been lighting up the G-League while on assignment with Long Island as part of his 2-way deal. The hope for tonight was that Edwards could translate even just a fraction of his performance. It is safe to say that Edwards blew expectations out of the water, as he had a phenomenal game. In his first game with actual minutes, 43 to be exact, Edwards put up his first career double double with 17 points and 10 rebounds.

His activity on the boards, especially on offense, would provide more opportunities for the Nets offense. Known for his potential as a 3-an-D wing, Edwards shot lights out, going 7/12 from the field, going 3/6 from three. His staunch defense on players ranging from Scottie barnes to Siakam to the Raptors guards was impressive and showed glimpses of what he could become as he continues his career. What impressed me the most from Edwards’ performance was his confidence and aggressiveness. When he had the wide open shot, he would take it no questions asked, and when he drove into the paint, he would absorb contact and put the shot up, following the play through to make sure the ball went into the bucket.

David Duke Jr. also had his first career double-double as well putting up 10 points and 13 rebounds. Though he may not have shot well after the first half, his biggest contributions were on the defensive end. DDJ was an absolute pest to the Raptors guards, and even came up with a couple blocks and turnovers. His aggressiveness and activity on the boards would also be key to the Nets victory.

Day’Ron Sharpe had a good bit of run in his 13 minutes, putting up seven points and seven rebounds. Sharpe showcased why he could be such a force in the paint both offensively and defensively. Though, there were moments where Sharpe showcased how raw he is and that there are parts of his game that still need to be developed as time goes on. However, Sharpe’s energy and the way he throws his body around are what fans should be looking forward to seeing as the year and his career goes on. On a fun note, it also looks like Sharpe is the Nets’ biggest cheerleader and hype man on the sidelines.

Nets fans know all too well about Cam Thomas and his abilities. However, Thomas did have a rough go, only putting up four points on 2/10 shooting. Though the shots did not fall, there is still something important to take away from this. Thomas is a great shot creator, and his confidence never wanes. Even with the poor shooting, Thomas still tried to get his shot going and brought attention to him in an attempt to alleviate pressure from Durant. With Thomas having the ultimate green light, and being a key member of the rotation, we can expect a bounce back game from him.

Looking forward, the Nets continue their homestead at The Clays versus the 76ers at 7:30 PM EST on Thursday. The Nets may be playing the same eight players from Tuesday night, depending on possible use of the three hardship exceptions provided, or any returning members from health and safety protocols. As a reminder, hardship exceptions will be an additional $500K to the luxury tax. When it comes to health and safety protocols, players will either have to quarantine 10–14 days minimum, or test negatively twice in 24 hours. The Brooklyn Nets are currently 20–8 and maintain a 2.5 game lead for the first seed in the Eastern Conference.