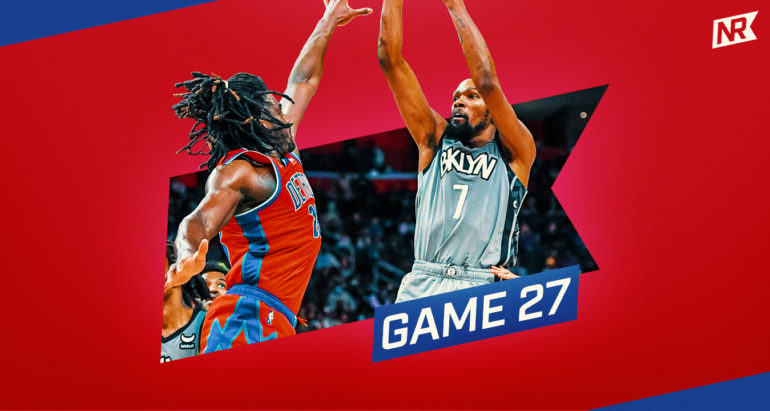 Forgive me if you have heard this before, but Kevin Durant saved the Brooklyn Nets yet again. Already shorthanded with Joe Harris recovering from ankle surgery and Kyrie Irving still out, it was announced that James Harden and Paul Millsap would also miss Sunday night’s game against the Detroit Pistons. Nonetheless, the Nets pulled out a gutsy victory, winning 116–104. Durant put the team on his back dropping a whopping 51 points, 7 rebounds, and 9 assists. Veterans Patty Mills and LaMarcus Aldridge played their part adding in 18 and 15 points, respectively. Up-and-coming rookie Cam Thomas scored in the double digits for the third straight game with 13.

The first quarter of this game saw Brooklyn race out to a quick 31–24 lead. However, the second quarter featured questionable lineups and play, but with the steady pace of Kevin Durant, the Nets maintained a 60–57 lead at the half.

The game seemingly turned for the worst in the third quarter. The Nets gave up 10 turnovers, and let the likes of Saben Lee and Frank Jackson cook them. Again, Durant buoyed the Nets with 16 points in the quarter. The Pistons held a 91–86 lead heading into the fourth. In typical Nets fashion, they sat up in their gaming chair and turned up. Coupled by blistering buckets from both Durant and rookie Cam Thomas and hounding defense, the Nets went on a 19–1 run to start the quarter. The Nets defense ultimately caused eight turnovers for the Pistons, and completely shut down their offense, as the Pistons did not score their first field goal until the 5:43 mark. To put the icing on the win, Durant’s 51 is now a Little Caesars Arena record.

Kevin Durant is the best player in the world. Already leading the league in scoring at 28.5 points per game on 53/37/87 splits, Durant put on an offensive masterclass. Without James Harden and Kyrie Irving, he put the Nets on his back. With the usual smoothness of his game, KD got to his usual spots and got his usual buckets. With his 51 point performance, Durant’s scoring average has been bumped up to a league leading 29.4 points per game. On top of his efficient scoring, let us not ignore his facilitating as well. Durant would also create opportunities for his teammates, especially in transition, for nine assists.

One of the more quieter aspects of Durant’s game this season has been his defense. Yet again, Durant was very active on that end of the floor, registering two blocks and a steal. Though the box score won’t show it, Durant was key in disrupting the driving lanes and altering shots.

With the masterclass today, it’s always important to remind ourselves not to take Kevin Durant for granted. Even though us Nets fans will continue to experience his stellar play this season, and the next five years, having a player of Durant’s caliber in a Nets uniform happens only once-in-a-lifetime.

With James Harden out, it would only make sense that we would see more time for Cam Thomas. In his 29 minutes, the rookie with the ultimate-green-light to shoot continued to prove that he deserves to be part of the rotation. Thomas finished with 13 points, 4 rebounds, 3 assists. Most importantly, his biggest contributions came in the fourth quarter. For a good 5–6 minute stretch, the fourth quarter was the Kevin Durant and Cam Thomas show. If Durant wasn’t shooting, it was probably Thomas scoring nine of his 13 points in the fourth. One of his buckets was a nice reverse layup off a Durant feed, continuing to show his ability to score in anyway possible.

The Nets defense deserves its credit and flowers. After being a problem all of last season, the team has drastically improved this end. The Nets currently have the fifth best defense in the league with a 106.0 DRTG. Sunday night, the Nets continued to show that the defense is legit. The stifling fourth quarter defense was on display again, as they only allowed the Pistons to score 13 points. This is the third game in the last four where the Nets have held opponents to less than 15 points in the fourth. In that fourth quarter, the Pistons shot 4/18, and forced eight of their 19 total turnovers. As the season continues, I would expect that the Nets continue to improve their staunch defense, and ruin narratives as they do it. If you don’t believe that, at least look at how impressive the Nets defense has been with numbers.

Looking ahead, the 19–8 Brooklyn Nets will come back home to The Clays. They’ll face the Toronto Raptors who will be coming off a back-to-back on Tuesday, December 14. Currently, James Harden and Paul Millsap should be in line to return as well. The Nets currently hold a 1.5 game lead as the best team in the Eastern Conference, and will look to build that lead.