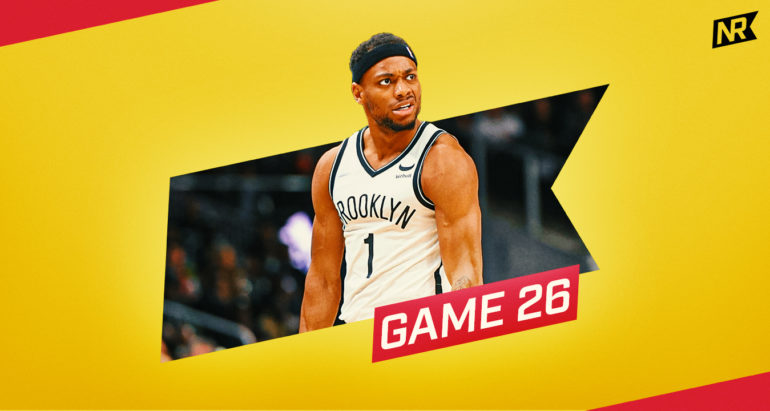 Following a loss in Houston, the Nets were back in action Friday night to take on Trae Young and the Atlanta Hawks. Unlike Wednesday night, the Nets would have the services of Kevin Durant and LaMarcus Aldridge in this one.

In a back-and-forth game, the Nets and Hawks exchanged momentum throughout the entirety of the night. Kevin Durant (31 points) would make his presence felt early for Brooklyn, dropping 12 first-quarter points including a thunderous slam in transition. The theme of the night for KD was “I’m going to shoot it and there’s nothing you can do about it.” Former Net Timothe Luwawu-Caborrat had his hands full all game trying to defend his former teammate but to no avail. TLC even fouled out in the waning minutes of the game.

Brooklyn as a team did struggle with turnovers early, however, they made up for it with some stellar play in the paint. Of the team’s 52 first-half points, the Nets would score 40 of them in the paint. Brooklyn would finish the game with a 66–50 advantage in points in the paint despite shooting eight fewer free throws. Bruce Brown was a major contributor to this, scoring all of his points off of putbacks and his patented floater.

Following a 10–2 Atlanta run in the third quarter, which would give them an 11-point lead, the Nets countered with a 12–4 run of their own. The Nets would get a great lift off the bench from rookie Cam Thomas as well. The youngster would sink a trio of long balls to help keep the Nets within striking distance. After a relatively unassuming first half, James Harden would flash his facilitating prowess in the third tallying six assists and was one of the catalysts behind Brooklyn’s 37-point explosion.

Brooklyn would start the fourth quarter on a 14–2 run, which was highlighted by two ferocious Nic Claxton dunks. Much like their game against the Mavericks, Brooklyn would tighten up on the defensive end holding Atlanta to just 14 points in the frame. Kevin Durant and James Harden (20 points, 5 rebounds, and 11 assists) would put the team on their backs with some big buckets, propelling the Nets to a 113–105 win.

Although he only scored four points in the win, they were two of the most important points for the Nets Friday night. After sitting the entire first half, Claxton entered the game midway through the third quarter and without hesitation showed why he should’ve seen the floor earlier. In his first defensive possession, he put the clamps on Trae albeit he’d pick up a technical foul arguing with the refs a few plays later.

As mentioned before, Claxton had two ferocious dunks which sparked Brooklyn’s big run in the fourth quarter. The first of which was a putback slam off a Patty Mills’ missed three-pointer. Claxton actually posterized James Johnson who just as easily could have made the putback. The second one was a true “Man’s Jam” as he collected a pass from James Harden in the paint and flushed it with one hand over two Hawks defenders. It was so nice the entire arena was buzzing.

The two highlight plays were nice, but it was really Claxton’s defense that stood out the most. Steve Nash stuck with the former Georgia Bulldog down the stretch just like he did against Dallas. Nic’s ability to switch onto elite offensive players and give them fits is exactly why Nets fans are so high on him. Even though Young was able to get a few layups on Claxton, he was contained for the most part.

The first half and beginning of the second saw LaMarcus Aldridge get taken advantage of on switches. As solid as he’s been on the offensive side, Aldridge can at times be a liability for Brooklyn on defense, especially when facing guards who are adept at using the pick and roll. This is where Claxton comes in. Even though Nic doesn’t space the floor the way LaMarcus can, his ability on defense could potentially make up for it tenfold.

Another postgame, another Cam Thomas section. It seems like this is becoming more and more frequent. Following a career night in Houston, Thomas played a vital role in Brooklyn’s comeback efforts in the second half. Primarily in the third quarter. Killa Cam would drop nine of his 11 points in the third quarter all coming off three-pointers. The rook also got active on the boards pulling down six rebounds and was a team-leading +16 in plus/minus.

The three-point shot has been something of a bugaboo for Cam early in his NBA career. Entering Friday’s contest Cam had been 2-for-26 (7.6%) on Above the Break 3s. But the old saying “shooters shoot” definitely applies to Cam as he looked as confident as ever splashing his three long-distance shots. Two of which came from above the break.

What was encouraging about his three-point shots was that they were all in rhythm and three out of four of them were catch and shoot threes. The only non-catch and shoot one was the smoothest of all of them though. He gets the ball on the wing and hits Cam Reddish with a nice jab-step dribble to create space. Then he launches before Lou Williams can recover.

Spacing has definitely been an issue this season but especially since Joe Harris got hurt. Before the injury, the Nets were league leaders in three-point percentage and have since bottomed out in Joe’s absence. We all know about the one-on-one ability Cam possesses but if he can become a solid spot-up shooter for Brooklyn off the bench as well it would go a long way in preventing those offensive droughts that plague Brooklyn whenever Kevin Durant leaves the floor.