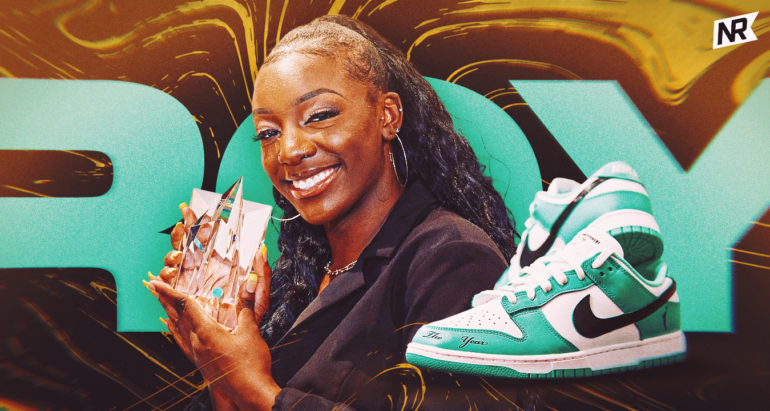 Earned Her Crown: Liberty Celebrate Michaela Onyenwere, the 2021 WNBA Rookie of the Year

On Wednesday, November 17—exactly six weeks after being named the WNBA’s 2021 Rookie of the Year—Michaela Onyenwere received her award in front of a crowd of Liberty season ticket holders. Commissioner Cathy Engelbert presented the trophy to the #6 pick, along with a custom pair of Nike Dunks, at Snipes, a sneaker store across the street from the Liberty’s home court at the Barclays Center. The recently crowned rookie of the year, after a Q&A with in-arena host Jess Sims, stuck around to sign autographs and take pictures with the gathered fans.

Onyenwere, led all rookies in scoring (8.6 points per game), as well as made field goals (91) and three-pointers (37), while playing in all 32 games and starting 29 of them. Onyenwere received 47 of the 49 media votes, becoming the first ever Liberty rookie to win the award. Teammate DiDi Richards, who showed up to support her teammate and friend, earned one of those two votes that didn’t land in Onyenwere’s ledger.

The Mic and DiDi Show

The pair, often alongside All-Star Betnijah Laney, have been seemingly everywhere so far this offseason, appearing at red carpets all over the city and beyond. Onyenwere laughed when I asked her about it on Wednesday. “Everybody is like, ‘It’s a world tour!”

As for her personal highlights of that tour so far?

“Probably going to Disney World,” Onyenwere said. ”It was my second time going. I went with DiDi and her family.”

“That was really fun and then going to the NBA Top Shot event. Obviously, to be able to learn more about NFTs, and what the game was becoming in that way. But also, we got to meet Quavo, and that was really fun.”

She’s been a regular at sporting events, too. After attending a Mets game over the summer, Onyenwere has now sat courtside at Nets games and even popped over to check out their co-tenant’s rival Knicks.

To this point, her offseason has deviated from its anticipated trajectory. Onyenwere had initially signed on to play overseas with Spain’s Spar Girona, but suffered an RCL tear in her right thumb at the end of the season that required surgery. (On Wednesday night, Onyenwere said she was feeling good and had shed the protective brace she’d worn during her recovery.) She’s made the most of her time away from the court, though, taking a breath to fully absorb the city that has adopted her as a pro.

“There’s just so many different opportunities that I’ve had, so many people I’ve met,” Onyenwere said. “Obviously, I don’t want to get hurt, but it’s almost been a blessing in disguise. I’ve just been able to do so much and have so much fun. And I love basketball. I miss it so much but like it’s been so cool to have this kind of outlet where it’s like basketball isn’t my first priority right now, but I’m still having so much fun. Like, the season was the best six months of my life, and then this has been the best two months of my life. I’m just having so much fun here and like I couldn’t be more grateful.”

This is the first break Michaela Onyenwere has had in a long while, especially when you take into account that there were just three weeks between UCLA’s second-round NCAA tournament upset loss to Texas last March and the WNBA Draft in mid-April. She had no idea, at the time, which of the dozen W cities she’d be calling home. This year, she’s excited to follow along with the offseason.

“It’s different,” Onyenwere said. “I’ve never been through free agency. I’ve seen it and I’ve watched it, though I’ve never really been a part of the madness of what it is. But it is cool to have that safe place here. I love Brooklyn, like I said, so I’m glad I’m here to stay for the time being.”

The New York Liberty have already received some encouraging news: the potential return of Asia Durr, the second overall pick in the 2019 draft. Durr has been sidelined for the past two WNBA seasons while suffering—and battling to recover from—COVID long-hauler symptoms.

Though Durr was not around the team for much of 2021, rehabbing at home in Georgia, she did stop by to see the Liberty when they came down to play the Atlanta Dream in June. B. Terrell captured this photo, one of my favorites of the season, of Laney embracing Durr after the final whistle.

Onyenwere, who said she’d actually first met Durr when she looked at Louisville as a potential college choice, said her Liberty teammate has still been a presence, even if not there in person. “I get DMs from her every now and then,” Onyenwere said. “Just emotionally, she’s supporting us, so she’s never really been away, even though she wasn’t here physically. I love Asia, she’s just such a great person.”

Durr will attempt to earn back a spot on a young, confident New York team. Throughout the evening, both Onyenwere and Richards confidently stated that last season’s eight-seed finish was just a taste of this team’s potential, and they were hungry to run it back. The pair, along with the headlining Laney/Sabrina Ionescu/Natasha Howard trio, comprise a core that Liberty fans should be excited about, on and off the court.

Onyenwere never takes her success or opportunities for granted. “I hope you guys understand how grateful I am to be in New York and a part of this organization.” It’s easy to say that the front office feels that same gratitude towards their reigning Rookie of the Year.