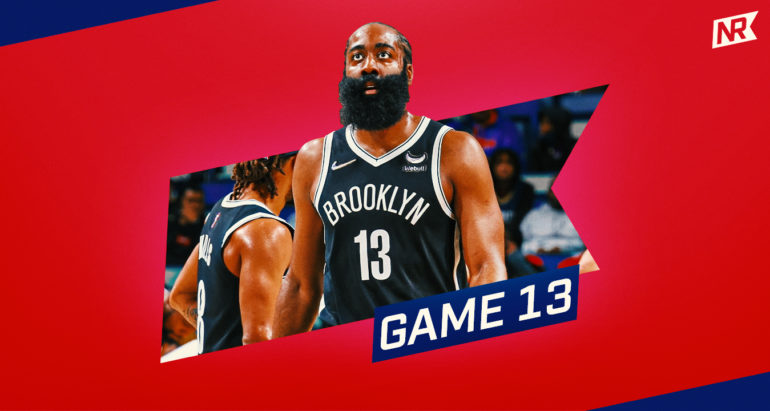 Fresh off a dominating outing against the Magic on Wednesday, the Nets found themselves in a less than easy night against the Pelicans. Although Brooklyn held as large as a 21-point lead in the second half, New Orleans made a furious comeback and actually took the lead late in the fourth quarter.

A Bruce Brown three with just over 4 minutes left tied the ball game and would be the catalyst for a 19-8 Brooklyn run to end the game. Kevin Durant and James Harden, both of whom had big nights, carried the Nets on their backs down the stretch to secure the victory.

Here are three of the main takeaways from Brooklyn’s 120-112 win:

Easily the one name that, if uttered across Nets Twitter, could set off a nuclear war, Joe Harris has been the subject of scrutiny since his failings in last season’s playoffs. Friday night against New Orleans however, Joe reminded Nets fans why his name is Joey Buckets. Harris started off the night hitting the first basket of the game for Brooklyn which was a three-pointer. Obviously, when a player, especially a sharpshooter hits their first shot of the night it’s a good sign. However, I don’t think anyone could have predicted the shooting onslaught that Harris would go on in the opening frame. Harris caught fire and scored 15 points on a perfect 5-5 shooting from deep.

The hot shooting would continue in the second quarter as he connected on another triple and added a layup to boot. Harris actually led all scorers at halftime with 20 points on a perfect 7-7 shooting. Although he’d only score 4 points in the second half, Harris had a huge floater late in the fourth on a helter-skelter play to give Brooklyn a 4-point lead.

Nights like these are a good reminder of just how lethal Harris can be from deep. But we know he can do it during the regular season. The real question is if this hot shooting will be there come playoff time.

Playing down to your opponent

Although not something to panic about right now, the Nets have had quite a few lapses as of late against lesser opponents. As mentioned earlier the Nets almost squandered a 21-point third-quarter lead. A 12-4 by the Pelicans at the end of the third quarter was the springboard for their 4th quarter comeback. If not for the late-game heroics of Durant and Harden, Brooklyn may have let this one slip away.

This is the second time on the road trip that Brooklyn has almost collapsed in the second half. The team almost squandered a double-digit lead against the Pistons a few games ago. Although a lack of focus and easing off the gas is the main culprit, the lineups also play a role in this as well. The bench unit needs to keep up the intensity and level of play when the starters go to the bench. If anything, just keep the ship afloat. Some blame also has to be put on the head coach. A well-timed timeout when a team is starting to show signs of life is an important aspect.

Credit to New Orleans for fighting back but Friday night should have been the second straight game in which the starters could enjoy the 4th quarter from the bench instead of having to fight and claw for a win.

James Harden is getting closer and closer

Day by day, game by game James Harden is progressing back to the Harden of old. The Beard put on a master class performance recording a 39 point, 5 rebound, and 12 assist stat line. The 39 points are his highest point total of the season. From the opening tip, Harden was locked in offensively especially from a facilitating standpoint. He dished out 5 of his 12 dimes in the first quarter to go along with his 7 points.

The 2nd and 3rd quarters are really where Harden found his groove offensively as he combined for 23 of his 39 points. He collected his points in a variety of ways. Whether it was driving to the basket or dancing on defenders before splashing a three, Harden had the defense in the palm of his hand. He even got a foul call on two separate three-point attempts. Even though he would have a relatively quiet fourth quarter, he connected on arguably the biggest shot of the night which was a dagger three from the top of the arc with 29 seconds left in the game.

After folks all but wrote James Harden off as washed to start the season, The Beard is averaging 21.8 PPG, 8.3 RPG, and 9.6 APG including 7 FTA. As highlighted in other recaps, Harden is getting downhill with much more ease and consistency than at the start of the season. It’s not the exact same quick burst we saw last season but his savvy and strength all but make up for it.

Next up: Nets take on the Oklahoma City Thunder (Sunday, 7 PM)