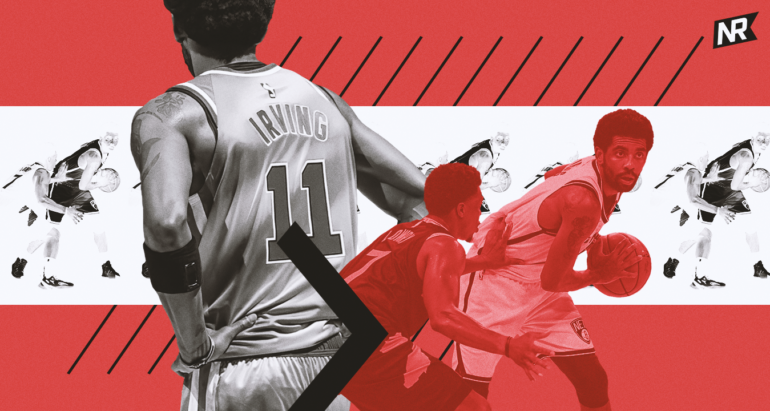 Brooklyn Nets: Why Kyrie Irving’s Post-ups Are No Laughing Matter

Remember back in the early part of the season when Kyrie Irving went on Instagram Live to hold a “Sitting with KAI” session? How he and Kevin Durant joked about the number of post-ups a game Irving got, which sent the basketball world into a tizzy as with anything Irving does?

Well, as we’ve seen throughout the season, Irving has not been someone the Nets just dump the ball to in the post like he’s prime Shaq or Hakeem Olajuwon. However, feeding Irving in the post has proven to be very productive for Brooklyn this season.

Perhaps it’s something that should be incorporated more within the offense.

There’s no denying Irving is one of the most gifted players we have in the NBA today. Aside from his dazzling dribbling displays and acrobatic finishes, Irving can flat-out shoot. The angles he uses to get some of his shots to fall makes you wonder if he’s actually performing physics calculations in his head before releasing the ball. All of his unique skillsets are highlighted in his ability to score not only from beyond the arc and at the basket, but also from the post.

Standing at just about 6’2″, Irving is by no means a big guard. However, he uses his craftiness to make up for his lack of size. From the beginning of the season until May 2 of this year, Irving has only had 1.6 percent of his offensive possessions come from post-ups, or 18 possessions. From those, Irving scored 25 points (1.389 points per possession) on 10-of-14 shooting, which averages out to a 74.4 percent clip. He’s also gotten to the line 16.7 percent of the time, making his scoring percentage in post-ups a solid 66.7 percent. This means whenever Irving gets the ball on the block, especially at the end of the shot clock, he’s more often than not putting points on the board.

Usually when players operate on the block or in back down, post-up situations, they tend to have a favorite side of the floor or a particular shoulder they prefer to shoot over. In Irving’s case, however, it’s pretty much even. This makes sense for someone of his unique finishing ability with either hand. Irving’s post-up possessions are split evenly between both blocks, which is honestly a little surprising—but not shocking. While on the left block, Irving has shot 50 percent with three made field goals on six attempts, scoring eight points in the process. The right block is where Irving has had most of his success, connecting on 7 of 8 attempts resulting in 17 points.

As mentioned before, with players preferring one shoulder over the other, Irving keeps things pretty balanced while on the left block. Of the nine possessions on the left side, he’s turned over his left shoulder four times while turning over his right five times. But of the six shot attempts, five have come from over the right shoulder. The right block is where it gets pretty one-sided, though. Out of all nine possessions, Irving did not take a single attempt over his left shoulder. Seven of his eight shot attempts were over the right shoulder, with one of the attempts coming from a face-up.

But because Irving sank all seven of those attempts, it’s hard to argue with the results. As the saying goes, if it ain’t broke, don’t fix it.

Although numbers are fun and all, sometimes it’s just easier to see how successful Irving is in the post. In this short clip from the Nets’ win over the Phoenix Suns a few games ago, you see Chris Paul bump Irving off the block out almost to the three-point line. Even though Paul is one of the better defensive guards in the league, Irving bangs into Paul with his right shoulder, then works the ball toward the middle of the paint. Then, he uses his shiftiness to fake as if he’s going to go over his left shoulder and finishes with his left hand.

Below is another example from March against the Orlando Magic, a game in which Irving dropped 43 points. This time, he is on the opposite block working on Orlando’s Chasson Randle. Instead of catching the ball into a post-up situation, Irving takes it upon himself to create one, walking Randle down with his dribble before going to work. He once again uses his body to get the defender leaning, but instead of dribbling toward the middle of the floor, he just gives a little shoulder shimmy, pivots, and rises up over the defender.

Credit where it’s due, Randle’s defense was solid. But sometimes solid isn’t enough when dealing with an offensive assassin the likes of Uncle Drew.

Let’s make it a trifecta, shall we? Here’s Irving catching the ball a little bit away from the basket. He backs down the Detroit Pistons’ Saben Lee, but unlike the other two clips, there is no finesse with this possession. Irving just muscles his way to his spot before rising up and connecting on the fadeaway for the and-1.

It’s been a shame the Nets’ “Big 3” of Irving, Durant, and James Harden haven’t been able to share the floor as much as many have wanted. However, while on the floor, each one has delivered some dazzling performances and highlights. As the season winds down and Brooklyn gears up for their title run it’ll be interesting to see if there will be any noticeable changes with their offense.

One thing is for certain, however: Irving should be fed on the block more. The data (and the eye test) back it up.