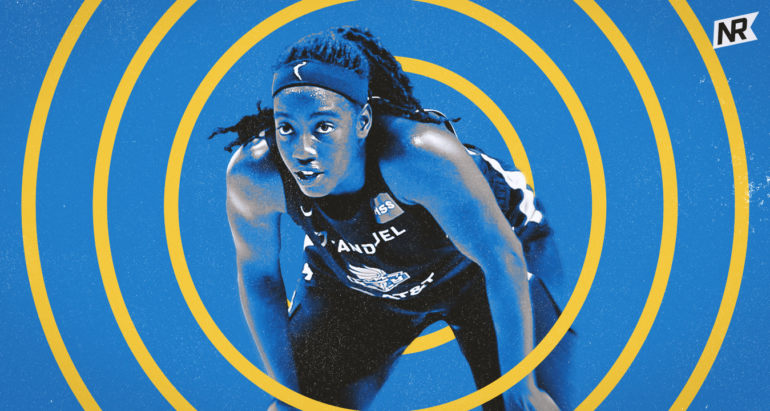 New York Liberty: Jazmine Jones Is Ready for a Follow-up

New York Liberty sophomore Jazmine Jones is a woman of many talents. After all, the Louisville alumna went from the final pick of the first round at the 2020 WNBA Draft to earning All-Rookie Team honors. All this, too, while playing a position she hadn’t since her high school days at Florida A&M Developmental Research School.

Her latest flair, however, might be one of the most astonishing acts of all: She can make rookie DiDi Richards laugh through even the most straining of practices.

“[Head coach Walt Hopkins] might be killing us, but then Jaz will say something that makes you laugh,” Richards told reporters on Monday. “So then I’m not really dying, I’m like laughing and dying, you know?”

Had her basketball talents gone unnoticed, Jones could’ve well followed in Mindy Kaling’s footsteps: move to Brooklyn and become a comedy star. Fortunately for the Liberty, she fell to them on draft night and rewarded the team’s faith with a strong rookie season. She became one of five full-time rookies to reach double figures in scoring average (10.8 PPG) and led all first-years in steals (1.4).

“She gives you everything,” assistant coach Shelley Patterson said of Jones. “She’s almost a vet, and through the fact that she talks just as much as Sabrina [Ionescu], and she runs that second team, … [S]he’s done a great job.”

Jones’ second season of WNBA action begins Friday, when the Liberty officially open their Brooklyn era against the Indiana Fever (7 p.m. ET, NBA TV). It’s a career that, court-wise, has probably aged her by at least a half-decade.

It was easy for Jones to get lost in the hullabaloo of the Liberty’s 2020 draft proceedings. Ionescu went first overall, while Jones waited until the final selection of the opening stanza to hear her name called. Isolated in the Bradenton bubble, Jones was forced to mature in a hurry as one of seven rookies on the team. Then, she took over the point guard role when Ionescu departed after only three games due to a devastating ankle injury.

Jones immediately rose to the occasion, making herself essential when the team could have made some potentially awkward decisions. When Ionescu went down, Jones kept the Liberty in the game against the Atlanta Dream. It was just the second of her career after missing the bubble’s maiden voyage against Seattle. She scored 20 points against the Dream before breaking that infantile career-best against Los Angeles nearly two weeks later with 24 points. The latter game kicked off a streak of six consecutive showings in double figures.

“The main thing about Jaz is her energy,” Hopkins said of Jones last summer. “When she brings her energy, no matter what, she brings us a lot. It’s defensive, it’s toughness, swagger. Jaz has been huge for us.”

Through this exercise, Jones appears to fill a new form of character in the Liberty’s endless search for the trait. A second-year player now has the experience knowledge of a seasoned veteran.

The scariest part, particularly for those who go face-to-face with Jones this season? Her primary goal for 2021 is to get better.

“I just want to be better than I was last year, I want to be more consistent, and just work on my personal growth, on and off the court,” she said. “You never know what’s going to happen. I got thrown into the point guard position [last year] … Going into my rookie year I was working on more ball handling and things like that, tightening up my handles making results and picking rows and stuff like that.

“I had a good rookie year, so I’m just coming into my second year with more confidence.”

Part of Jones’ confidence stems from team-wide endeavors and newly-found, if not delayed, perks and accommodations. Friday will mark the Liberty’s first game as full-time members of the Barclays Center family following two seasons in far-flung White Plains, N.Y. and one in the Florida bubble. Jones is looking forward to having a friendly audience enjoy her energetic antics that include pregame dancing and handshakes with her teammates.

While neutrality reigned in the Sunshine State, Jones is looking forward to entertaining an adoring public. It’s a luxury not afforded to her since her final appearance at KFC Yum! Center in the Bluegrass State.

“’I’m excited to play in a home arena in front of fans, because I’m the type of person and player that feeds off the crowds, energy,” Jones said. “It’s going to be awesome for me playing in front of fans, just going out there, being myself, being my collective cool self on the court, and having fun.”

With the return to basketball—within city limits, that is—comes some new expectations. Jones and Ionescu return, and Natasha Howard, Sami Whitcomb, and Betnijah Laney‘s arrivals foster big expectations. They’re expectations that follow a Liberty team for the first time since their dominant run atop the Eastern Conference—66 wins in a three-year stretch—that ended in 2017 along with their tenure in Madison Square Garden.

Jones handles the prognosticators the best way she knows: enthusiasm and humor. Skeptical Liberty fans should know she’s willing to put her game checks on the line, following the apparent New York tradition of guarantees started by Joe Namath and Mark Messier.

“We won two games last year, so what’s the pressure, to win three this year? Whoo-o-o,” Jones said with a laugh. “I feel like we’re going to be good this year. We have some great new additions to the team, we’ve got Bec [Allen] coming back, [Kiah] Stokes is coming back from overseas, we got Tash coming back soon. They haven’t seen me with Betnijah and Sab … I’ll put my check on it that we’ll win more than two games.”