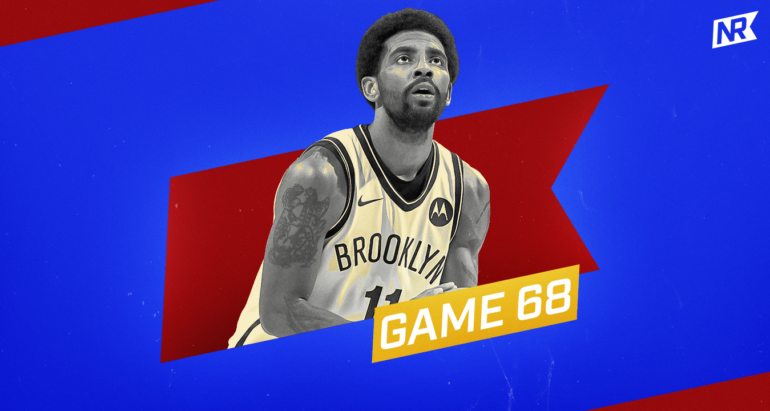 As many people anticipated at the beginning of the season, the Brooklyn Nets are gearing up for the playoffs. They have fallen behind a bit in terms of pace for the No. 1 seed in the Eastern Conference, but they still have a few games left to get on track. With Kevin Durant now back in the lineup and James Harden‘s return imminent, Brooklyn almost has its “Big 3” back in action.

The Nets still have a few games left before Harden’s return and before the playoffs begin, however. On Saturday night, Brooklyn traveled to face leading MVP candidate Nikola Jokić and the red-hot Denver Nuggets. They hoped to put together a good showing against a team that hasn’t slowed down despite Jamal Murray‘s recent ACL tear.

Unfortunately, the Nets got off to a slow start. Denver took a double-digit lead in the first quarter and looked like they were going to cruise to victory. However, Brooklyn responded with a charged third quarter to keep the game close. Ultimately, the second-half run was enough to put the Nets back on top midway through the fourth quarter. In the end, the Nets mounted a comeback from down 21 points and secured a 125-119 win.

Here are three takeaways from this one as Brooklyn prepares for its final four regular-season games next week.

Kevin Durant and the Nets entered this game on the heels of a disappointing four-point loss to the Dallas Mavericks. In that one, Durant scored 20 points on 21 attempts. He wasn’t much of a factor down the stretch as Kyrie Irving took the key shots late.

This game was much better for Durant, especially in terms of his efficiency. He scored 16 points on just seven shots in the first half, including this hammer after a feed from Irving:

Durant finished with 33 points, 11 rebounds, 7 assists, 2 blocks, and 2 steals in a stat sheet-stuffing performance. He hit a triple in the fourth quarter that completed the comeback and brought the Nets back to even.

Additionally, he was quite active on the defensive end as a shot blocker and as a pest on the ball. Durant locked on to Michael Porter, Jr. and helped cut the lead to single digits early in the second half. He also got a crucial stop on Jokić with 21 seconds left. On Denver’s next shot, he grabbed the rebound and iced the game from the free throw line.

The Nets needed every second of Durant’s stellar outing on their way to ending their losing streak.

While Irving and Durant had scored in double figures, no other Net eclipsed five points in an uncharacteristically poor first half offensively. Brooklyn went back to the locker room down 15.

That certainly changed in a hurry in the second half, and Irving kept the comeback effort going for the rest of the game. He scored 10 points in the first four minutes of the third quarter, with one triple that cut the Denver lead to three. Irving also assisted Blake Griffin on two of Griffin’s buckets during his third-quarter run. He finished the game with 31 points, and his third quarter was necessary to get the Nets back into the game after a rough first half.

Griffin got the starting nod at center against Jokić, but he did not look good early. He scored 4 points and grabbed a single rebound in the first half. While he did help to limit Jokić early and did a decent job on him in the post, Griffin did not do all that much to contribute to Brooklyn’s help defense in a 71-point Denver first half.

The second half, however, was an entirely different story. Griffin hit two triples and scored on a drive to the rim early in the half, putting up 8 points in the first two and a half minutes of the third quarter. He ended up with 16 points and four triples in the third quarter and finished the game with 20 points on just 10 shots. This was his first 20-point outing with the Nets.

Brooklyn turned a pending blowout into a close game, and that would not have been possible without Griffin going supernova in the third quarter.