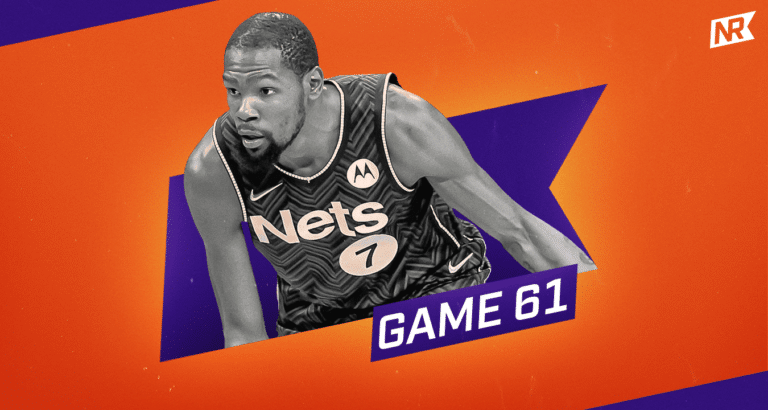 With Kevin Durant returning to the lineup, Sunday featured a star-studded clash between two of the NBA’s elite teams. After trading blows back and forth for the entirety of the first half, the Brooklyn Nets finally seized control of the game late in the third quarter and never looked back, completing the season sweep of a very good Phoenix Suns squad with a 128-119 decision.

Among the many takeaways, here are three things about this win that stood out in particular:

The combination of Durant and Kyrie Irving was in full bloom against the Suns. With Durant coming off the bench due to minutes restrictions, it was the Kyrie Irving Show in the first quarter. He was as the kids say, in his bag, generating points in a variety of ways. In fact, Irving had 16 of Brooklyn’s first 20 points.

The hot start continued throughout the second quarter, and by halftime Irving had racked up 24 points on only seven shots. Although his scoring cooled off in the second half, Irving still did a masterful job facilitating for his teammates and playing solid defense. He finished with a team-high 34 points and 12 assists while pulling down 6 boards. Needless to say, it was an impressive bounce back after Friday’s dud against Boston.

Now, with regards to Durant, we’re running out of words to describe just how good he is at the game of basketball. As mentioned earlier, he was on a minutes restriction so he didn’t check in until around the seven-minute mark of the second quarter. Once he checked in, however, he didn’t miss a beat, connecting on his first shot attempt: a runner in the lane. With Brooklyn down by as many as 12 points in the second quarter, Durant—who went on to score nine points in seven minutes—was one of the catalysts of Brooklyn’s 16-5 run to close out the half. He started the the second half and put on an absolute show. No matter how many times you see him hit a contested midrange or step into a three-pointer, you’re just in awe at the ease in which Durant makes these shots.

Durant finished with 33 points on 12-of-21 shooting and pulled down 6 rebounds. The duo of Irving and KD combined for 67 of Brooklyn’s 128 points, and it probably would’ve been more if Durant didn’t sit the entire first quarter. With James Harden not set to return any time soon, the “7-11” duo looks poised to carry Brooklyn down the stretch.

Durant wasn’t the only Nets player who made his return to the lineup on Sunday. This game also marked the return of Tyler Johnson, who had missed the last 10 games with a knee strain. And much like Durant, Johnson didn’t seem to miss a beat as he connected on his first shot of the game, a three-pointer from the corner.

Unlike Durant, however, Johnson didn’t have an offensive explosion. Rather, he played similarly to how he has played for Brooklyn all season: solid minutes in the backup and off-guard role while knocking down a few shots. He finished with 8 points in about 16 minutes while recording a +12 in plus/minus. With Harden out, Johnson adds yet another ball-handler in the backcourt who can get his own shot if need be. This allows for some peace of mind when Irving is on the bench.

Nets Continue to Shine Against Elites

Nets fans aren’t happy when their team doesn’t show up against lesser opponents. But they have to be equally as happy that when this team does decide to show up, they are nearly unbeatable.

Against the five teams (excluding the Nets) with the best records in the league, Brooklyn holds a 7-3 record. Out of that group, the only two teams that have beaten Brooklyn are Utah and Philadelphia. But context matters: In the Jazz loss, Brooklyn was without the services of Harden, Durant, and Irving. And in both losses to Philadelphia, the Nets had only one of their “big three.”

Brooklyn now has season sweeps over the Clippers and Suns. It will also look for a season sweep over the Nuggets, who it will see in the coming weeks. All of these are teams who could possibly meet Brooklyn in the Finals.

Blake Griffin tallied 16 points in 27 minutes off the bench while knocking down two three-pointers. Griffin also played some very solid possessions on defense when matched up against Devin Booker.

Plus, Jeff Green continued to bring the hammer down with two more monstrous dunks: