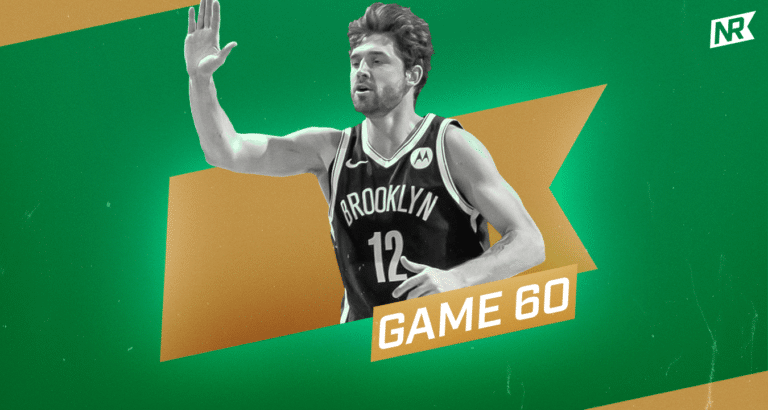 When the Boston Celtics visited the Brooklyn Nets on Friday night, the story was as much about the players off the court as the ones on it.

It’s nothing new to anyone who’s watched more than one NBA game this season. Brooklyn was missing two-thirds of its Big 3 and a dynamic big, in James Harden, Kevin Durant, and Nicolas Claxton. Boston mirrored by sidelining Kemba Walker and Jaylen Brown, plus Robert Williams III. A full-strength matchup would have been nice, but at least the circumstances felt fairly even.

The Celtics, like the Nets in their previous outing, were playing their second game in two cities in two nights. And, like the Nets did Wednesday against the Toronto Raptors, they lead early, despite the rest inequity. But, as the Nets also did Wednesday, Boston let that advantage slip away in the second quarter, and never regained control.

A Bruce Brown layup early in the second quarter put the Nets up 30-28, marking the last lead change or tie of the contest. And while things got hairy for Brooklyn late, the Nets ultimately held on by a score of 109-104, sweeping the regular-season series with Boston for the first time in 24 years. The win propelled the Nets into sole possession of the Eastern Conference lead. Brooklyn sits a half-game up on the Philadelphia 76ers, leading in the win column.

Here are three takeaways, and some extras, from Friday’s feel-good win.

If you’re the Celtics, that is. If you’re the Nets, Friday’s win is a testament to balanced roster construction, an issue that’s been plaguing Boston all year. With Kyrie Irving and Jayson Tatum assuming the role of head honcho for their respective teams, the role players that won their matchups loomed large. Brooklyn dominated those matchups across the board. After Tatum, seven of the next eight best players on the court were Nets. The only exception was Payton Pritchard, but he couldn’t make up for Bruce Brown and Blake Griffin terrorizing the rest of the Celtics bench. Nor for Joe Harris taking Evan Fournier and the Aaron Nesmiths and Romeo Langfords of the world to school. The list goes on.

Brad Stevens tried everything he could to prop up Tatum’s masterful 38-point performance. Twelve Celtics received minutes; not many earned more. The non-Tatum and Pritchard Celtics shot 5-23 from deep—Marcus Smart was a ghastly 2-10, and Brooklyn didn’t even guard him out there. Tristan Thompson was thoroughly outmuscled by DeAndre Jordan, particularly in the first half. The disparity in production from the supporting cast, among other factors, allowed Brooklyn to win despite Irving’s dreadful shooting night. His 4-19 performance from the floor wasn’t nearly enough to sink the Brooklyn ship when it easily could have.

This game showcased the chasm between Brooklyn and Boston. It’s not just that Harden, Durant, and Irving may be the three best players in a series between these teams. It’s that the gap in supporting casts is massive as well. And in the regular season, especially this one, it’s shown up in the win column. Harris and Jeff Green are liable to combine for 39 points on 71 percent true shooting, and whoever Boston’s fourth- and fifth-best players are, they’re not doing the same.

With each team missing significant offensive firepower, buckets were hard to come by. Half-court offense in particular was a slog. Even the Nets’ 39-point second-quarter outburst didn’t feature a ton of productive possessions when they got deep into sets. Boston actually outshot the Nets from deep, shooting 40.5 percent from beyond vs. Brooklyn’s 34.4 percent, on top of winning the offensive rebound battle 15-6.

So where did the Nets scrounge up 109 points from?

Well, a huge chunk of it came from their special teams, so to speak. Brooklyn won the turnover battle 19-11, including 12 live-ball steals. That, as well a desire to push off long rebounds, led to the Nets scoring 32 points on the fast break, compared to three measly points for Boston. If pushing the pace was a stated game plan to attack some heavy Boston legs, it was certainly well thought-out. The Nets continually punished the Celtics for not getting back in transition. And conversely…

Brooklyn Doesn’t Allow Any Easy Ones

Brooklyn wasn’t giving its gift-wrapped layups back on the other end. The easiest baskets the Celtics got all night came off of offensive rebounds (four of which came on one possession with six seconds to go). The Nets’ defensive strategy could be boiled down to “let him get his” with regards to Tatum, but they damn sure executed it. Tatum made some ridiculous shots, but took 27 of them, a large portion of which were tough jump shots over tight defense. The second half featured almost zero clean looks for the Celtics star.

Brooklyn did not send many doubles at Tatum, but often overloaded its help defense onto his side of the court when he had the rock. A swarm of bodies were ready to converge anytime he dribbled, and Tatum coughed up five turnovers vs. four assists. The Nets decided to completely disregard Smart as a shooting threat, allowing them to wall off the paint, where they outscored Boston 48-38.

That active help defense, as well as some great individual stops, forced many of the aforementioned turnovers. Brooklyn’s defense boosted its offense Friday, which is not a sentence we’ve heard often throughout this Nets season. But that may be why the win felt so uplifting, besides the fact that it was over the Cs. Sure, Boston was coming off a game the previous night, but anytime you win an “ugly” game with a poor shooting night from your superstar, it’s cause for celebration. Brooklyn did not play anywhere close to its best basketball against a division rival, and it hardly mattered. And if you can’t beat Brooklyn when the Nets are banged up and playing below their expectations, I don’t know when you can.

Next up: The 39-20 Brooklyn Nets will stay home and play the Phoenix Suns on Sunday at 2:30 p.m. ET. It’s an ESPN Sunday matinee against the Western Conference’s No. 2 seed. As of now, Durant could see the floor. The Nets could be playing to secure a lead in the loss column for the East’s No. 1 seed. As always with this team, there’s a lot to look forward to in this matchup, which will be simulcast on YES.

It was a tough call to choose this over a nice defensive possession that ended in a steal, but Bruce Brown must be highlighted some more. This is a good example of how little sprinkles of energy from a malleable player shift the momentum of a game. We know about Brown’s rebounding prowess and a baseline ability to handle the ball, which starts this play out. The rebound and push gets the ball flowing early. The offense has already switched sides by the time there are 17 seconds on the shot clock. That early push does not allow the Celtics to get set, so Tristan Thompson ends up cross-matched on Joey Buckets. So Joe Harris blows by him on the catch, gets to the rim, and makes a nice kick-out pass to the corner for a Jeff Green triple.

Bruce Brown sets things in motion, and we see Harris’ awesome, awesome improvement as an ancillary offensive piece. Harris can now pull up from the mid-range regularly on his drives. We already know what he does as a finisher around the rim, and he’s also become a reliable passer when advantages open up. As is the theme of this recap, the Nets are a deep team. And it’s winning them games.